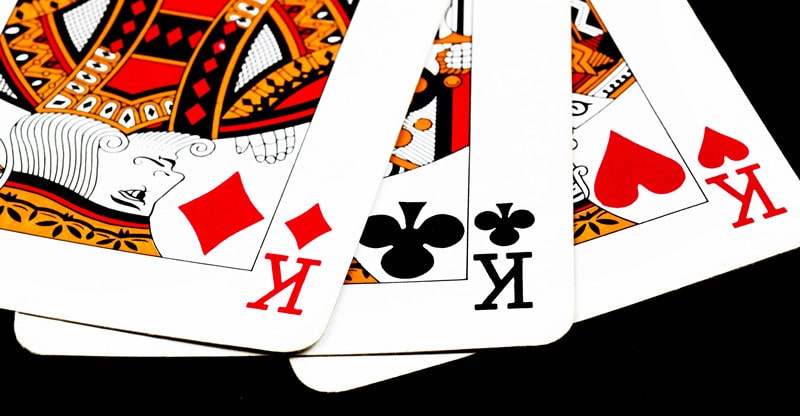 Poker is one of the most popular card games in the world. Everyone knows the game – not everyone knows the rules. Poker conjures up particular imagery: people in smart clothes gathered around a smoky table, pushing stacks of chips around the table top.

Whether it’s the glitz and glam of a modern casino or the fabulous retro setting of a speakeasy or private club, poker is a game that’s familiar to the world.

But poker has a far richer history than that. It’s been a popular source of entertainment for soldiers during wars dating back to the American War for Independence. Over the years different variations have emerged, mainly in the mid-20th century, changing the number of cards used and the ways cards behave while retaining the hierarchy of winning hands.

3-card poker is a form of stud poker developed for speed by British inventor Derek Webb in 1994. Webb tried for years to get his new game into casinos, but many were unwilling to give him a try.

“I never intended to become a travelling salesman, but effectively, that’s what happens,” Webb said. “One of the challenges of inventing is that you have to wear multiple hats to make it work.”

Webb was eventually able to demonstrate how popular and profitable his new game would be, it spread to casinos everywhere. The UK even changed its gambling laws – as 3-card poker had previously been forbidden – bringing the game back to Webb’s home country.

3-card poker has also taken off online, with many online casinos offering it in their catalogue of games. Part of the appeal is that it is very easy to pick up, the only difference with more traditional forms of poker being that straights beat flushes, as the chances of getting three cards in a row are significantly smaller with this variation. 3-card poker also offers different ways to bet, providing players with more opportunities to win.

How to play 3-card poker

As a more simple version of traditional poker, it’s relatively easy to get your head around 3-card poker:

Something to note: pair plus bets don’t compare your hand to the dealer’s, they simply pay on a scale depending on what you have. So a pair receives a 1:1 win, and a straight flush pays at 40:1. These two betting options can be combined, allowing for greater chances to win and the possibility of greater returns on your bets – as one player recently discovered when winning $1 million at the Venetian.

Many popular casino chains offer 3-card poker tables, however smaller, independent casinos tend to stick to the more traditional forms. If you fancy giving it a go, then heading to an online casino is a great way to start.

Because 3-card poker is quick, easy and fast to play, it’s one of the increasing number of games offered with a live play option. Live play links you to a real dealer, live from the casino floor, via a high-quality video and audio stream. It brings the atmosphere and excitement of a real casino straight to your computer, or wherever you’re playing, through your mobile device.

The betting options are clearly displayed on your screen. This can remove a lot of the confusion when learning a new game, as you are given clear prompts when you need to do something.

While land-based casinos perhaps have more of an atmosphere, owing to the other players surrounding you and the look and feel of the interior, live poker brings the human element to the fore. That’s why we’d suggest playing 3 card poker online is ideal for players still getting their heads around the rules.

3-card poker is a fun, modern take on a traditional game because:

As a gamer, it’s all too easy to stick with your tried-and-tested games – but sometimes it’s well worth getting out of your comfort zone and trying something new. As a popular game with familiar rules to poker players, 3 card poker could become your new favourite casino game.