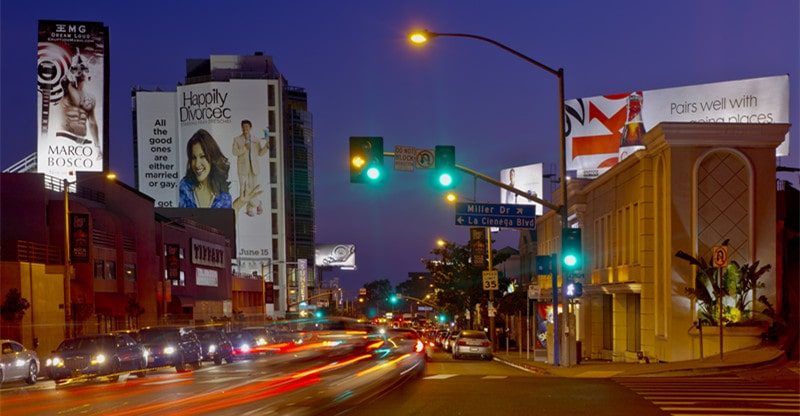 Los Angeles, or The City of Angels as it’s often known, is one of the most iconic cities in the entire United States. Known for its proximity to Hollywood, its heavy population of artists and thespians, and its progressive mindset, Los Angeles is absolutely full of potential and dreams. Not only for artists and aspiring actors and comedians, but also for entrepreneurs and business owners.

LA has a population of just over 4 million people, making it the largest city in all of California. This massive consumer market offers businesses a perfect environment for large-scale marketing efforts that have a wide audience reach. The following guide will help you navigate the world of marketing and advertising in a heavily populated and progressive city like Los Angeles.

To get this list started, Los Angeles billboards are typically very effective. This is true for a few reasons. As mentioned above, Los Angeles has a massive population. With just over 4 million residents, Los Angeles is actually the second largest city in the United States. Any heavily populated city is going to immediately offer high potential for billboard advertising.

This is simply because billboards rely on extremely high views in order to be effective. As such, the more people in a region, the more potential viewers there are. This is also true about areas with a large tourism industry, which also happens to fit LA’s personality.

Between the massive population of residents and the impressive tourism arm of LA, there are plenty of potential viewers to come across a business billboard. Not only that, but the traffic in Los Angeles is notoriously bad.

This makes some of the major highways in and around Los Angeles prime real estate for billboard advertising in Los Angeles. Marketing and advertising professionals can also set up billboards in, around, and near highly trafficked sites like sports stadiums and other popular tourist attractions. By strategically placing billboards in highly trafficked areas brands can effectively optimize how many views their billboard advertisements garner.

Another great way to advertise in Los Angeles is through the commissioning of a wallscape or a mural. Wallscapes and murals are most commonly painted on the side of a building, or on a canvas which is mounted to the side of a building. However, they are also generally works of authentic art.

Many brands will even commission a local artist to design and create the mural or wallscape, which can be good for the local and regional brand reputation. By partnering with a local artist, the brand can build up goodwill in the community, which can lead to an increased consumer base.

Wallscapes and murals are a particularly potent marketing and advertising option in a city like Los Angeles which is literally overflowing with artists from all different mediums and trades.

Transit marketing is another excellent option for a big city like Los Angeles. This is because there’s no escaping public transportation when your city has over 4 million residents. Between public buses, the subway, and various trains, there are a ton of different opportunities for transit marketing in Los Angeles.

A brand could roll out a series of bus wraps, market throughout the subways, or even create digital ads in and around various public transportation stops. Transit marketing efforts are a great way to connect with a target audience of daily commuters and to increase individual engagement amongst those consumers.

It is 2022, afterall, and that means that no brand is going to truly thrive without embracing the digital and remote world that has evolved. This means buying into comprehensive digital marketing efforts, including the utilization of social media.

By combining digital and social media marketing efforts along with traditional out of home media marketing (OOH) like billboards, your brand will be able to achieve its maximum reach.

One final advertising tactic that is becoming popular in many modern marketing strategies is the creation of a digital spectacle. This involves designing a massive digital display that is spread across a variety of 4+ monitors.

Digital spectacles are just that: a spectacle, and they can be really effective at attracting consumers both regionally and from out of town.

Billboards continue to be included in major marketing campaigns because of their proven efficacy, their massive audience reach, and their ability to connect with consumers in a way other advertising tactics just can’t seem to replicate.

If you’re advertising in LA, Los Angeles billboards are especially effective because of the massive population, the heavy traffic patterns, and the impressive tourist industry. Don’t stop your marketing efforts there, though, look to the guide above for a wide variety of successful and proven marketing campaigns in the Los Angeles market.