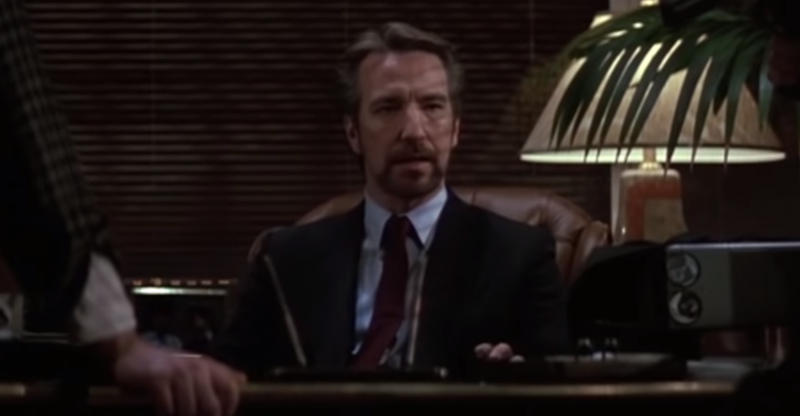 Bruce Willis’ Yippee-ki-yay might be the most memorable line from Die Hard, but Alan Rickman’s quotes are a close second. His portrayal of Hans Gruber is iconic to this day, and his role is quite popular among all Die Hard fans. He’s clever, sassy, and always speaks his mind. Moreover, we could all stand to learn something from these Alan Rickman Die Hard quotes.

Rickman has also always had a way with words and knows how to make the simplest statement sound brilliantly maniacal. The actor has carried these characteristics into his performance of Hans Gruber, which made for some great quotes. Keep reading to learn the funniest, most iconic Alan Rickman Die Hard quotes that will make you smile from ear to ear.

#1. Hans Gruber: “Do you really think you have a chance against us, Mr. Cowboy?”

#2. “Holly Gennaro McClane: After all your posturing, all your little speeches, you’re nothing but a common thief.”

#4. “Sooner or later, I might get to someone you do care about!”

Theo: “You didn’t bring me along for my charming personality.

Now I have a machine gun. Ho-ho-ho.” — Alan Rickman and Clarence Gilyard Jr.

#6. Hans Gruber: “Who are you then?”
John McClane: “Just a fly in the ointment, Hans. The monkey in the wrench. The pain in the ass.” — Alan Rickman and Bruce Willis

#7. John McClane: “You’d have made a pretty good cowboy yourself, Hans.”

Hans Gruber: “Oh, yes. What was it you said to me before? ‘Yippie-ki-yay, motherfucker.’” —  Alan Rickman and Bruce Willis

#8. Joseph Takagi: “You want money? What kind of terrorists are you?”

Hans Gruber: “Who said we were terrorists?” — Alan Rickman and James Shigeta

#9. Hans Gruber: “Well, when you steal $600, you can just disappear. When you steal $600 million, they will find you, unless they think you’re already dead.” — Alan Rickman and Bruce Willis

Hans Gruber: “We may have some problems. How’s our schedule?”

Theo: “One more to go then it’s up to you. And you better be right, because it looks like this last one is going to take a miracle.”

Hans Gruver: “It’s Christmas, Theo. It’s the time of miracles. So be of good cheer… and call me when you hit the last lock.” — Alan Rickman and Clarence Gilyard Jr.

#14. “Just another American who saw too many movies as a child.”

Hans Gruber: “Put down the gun.”

John McClane: “Why’d you have to nuke the whole building, Hans?”

#16. Hans Gruber: “I thought I told all of you, I want radio silence until further…”

John McClane: “Ooooh, I’m very sorry Hans. I didn’t get that message. Maybe you should’ve put it on the bulletin board. I figured since I’ve waxed Tony and Marco and his friend here, I figured you and Karl and Franco might be a little lonely, so I wanted to give you a call.”

Karl: “How does he know so much about th…”

Hans Gruber: “That’s very kind of you. I assume you are our mysterious party crasher. You are most troublesome, for a security guard.”

John McClane: “Eeeh! Sorry Hans, wrong guess. Would you like to go for Double Jeopardy where the scores can really change?” — Alan Rickman and Bruce Willis

#17. “And when Alexander saw the breadth of his domain, he wept, for there were no more worlds to conquer.”

#18. “I wanted this to be professional, efficient, adult, cooperative. Not a lot to ask. Alas, your Mr. Takagi did not see it that way… so he won’t be joining us for the rest of his life. We can go any way you want it. You can walk out of here or be carried out. But have no illusions. We are in charge. So decide now, each of you. And please remember — we have left nothing to chance.”

Hans Gruber: “You idiot; it’s not the police. It’s *him*!” —  Alan Rickman and Hans Buhringer

#20. “By the time they figure out what went wrong, we’ll be sitting on a beach, earning twenty percent.”

Hans Gruber: “I spent a weekend at a combat ranch. You know, where they shoot red paint, but it sounds stupid to you.”

John McClane: “Well, time for the real thing, Bill. All you gotta do is pull the trigger.” — Alan Rickman and Bruce Willis

#22. Hans Gruber: “This time, John Wayne does not walk off into the sunset with Grace Kelly.”

(Points gun at John) “Put down the gun and give me my detonators.”

Hans Gruber: “Do you really think you have a chance against us, Mr. Cowboy?” — Alan Rickman and Bruce Willis

The role of Hans Gruber in Die Hard is one of Alan Rickman’s most memorable performances. He brought a lot of his own character into the role and made his otherwise unlikable character quite endearing.

So when you need a good laugh or want to sound cool at a party, you can rely on these Alan Rickman Die Hard quotes to help you out.