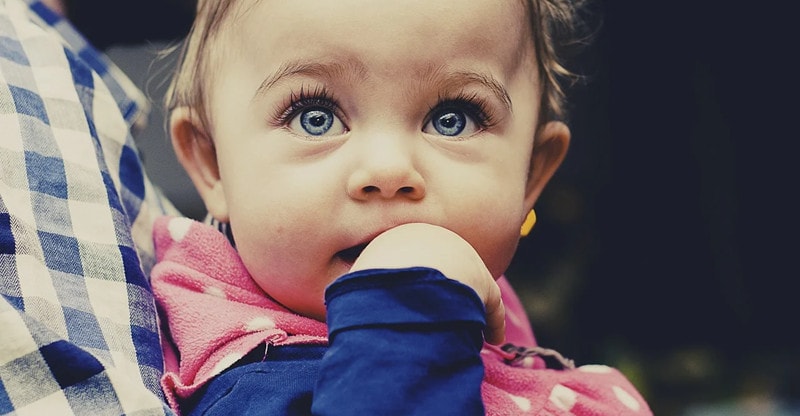 You’ve made it through the first few months of being a parent and it’s probably been an incredible experience, especially if it’s your first baby. The first month or so has a definite routine of eating, sleeping and changing diapers, but that’s all about to change when you head into the next stage of development.

When Do They Start Teething?

When it comes to babies, they’re all individuals, which means they’re going to hit different stages at different times. Don’t worry, it’s completely normal for this to happen and the world would be incredibly boring if every baby started walking on their first birthday and started talking on their 3rd birthday.

Because of this, it means there isn’t a definitive answer to this common question from parents, but as there are 7.5 billion people on the planet we can give a pretty educated and informed answer to the rough time frame. Babies start teething from around 4-6 months and will show different symptoms depending on who they are.

Babies drool no matter what, right? You’re probably forever finding clothes covered in your little one’s spittle, but it’s something we just don’t care about.

But, the taps will be turned fully on when teeth start coming through, it’s almost unfathomable how much can be produced by a person so small. You’ll probably find the clothes of your baby soaking wet the majority of the time and when this happens, it’s best to keep wiping their chin to avoid getting chapped at all.

I call it cheek rash because it makes babies cheeks bright red as though they’ve been drawn by a cartoonist, but it can affect more than just the cheeks.

These are caused by your babies drool as the constant drip can cause chapping, redness, and rashes around the mouth, chin and even on the neck. The best thing you can do is to keep wiping it away gently or try and use a treatment that creates a moisture barrier for them.

If you’ve ever had a certain kind of toothache, you’ll remember that some pressure on it helped immensely and that’s exactly the same with a baby. They have their little teeth poking through gums which can be immensely painful to them, but biting and chewing on things gives some relief as long as they keep on doing it.

If your little one has taken to chewing everything in their sight, and when sitting with you, wants to chew your hands and fingers, then it’s pretty safe to say that they are teething. To avoid them chewing anything you don’t want them to, buy a purpose-designed teething toy for them to hold on to at all points. It will save anything you don’t want wet, and breastfeeding moms.

Babies can’t talk, they don’t have the sufficient intellect to show us what’s going on, and they can’t really move much so their only outlet is to cry. Some babies go through their entire teething process without shedding a tear, but others can have it really bad and will have impressive lungs as a result. Speak to your doctor to see what pain relief you can give your baby.

A growing baby needs food, and most of the time they know it. I still find it fascinating how much food such a little person can put away in one sitting but that’s more when they’re toddlers. When teething a baby might refuse food due to the fact it makes them uncomfortable and makes their pain worse.

If an infant is breastfeeding or being fed with a premium formula such as Loulouka Stage 1, often the action of sucking will make their gums feel even sorer than they already are, and those that are eating solid foods may not want big lumps of food scratching and hurting them. Don’t worry if they go through this stage, hunger usually wins, and if it lasts more than a few days then call your doctor for some more advice.

There is no definitive way of being a parent as each and every person on the planet is different. We are all in different circumstances and all work different jobs. We have access to different things and will deal with situations in our own way.

Being a parent is the hardest job on the planet and the teething stage is certainly a tough one, but don’t worry you will get through it. Notice the signs and you’ll be ready to deal with it.