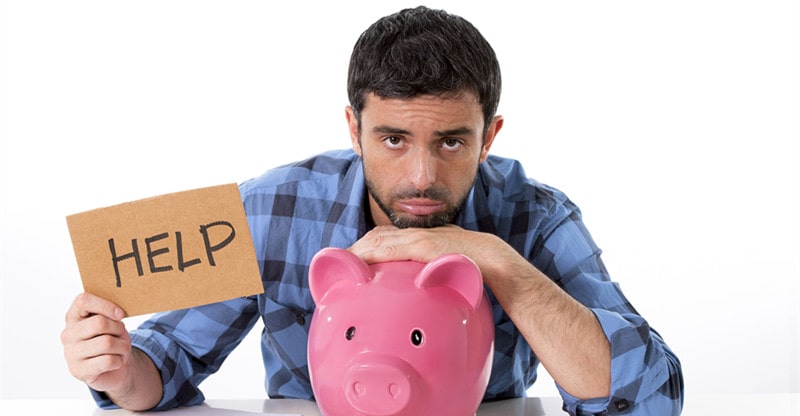 At one point or another, most of us were broke with only a few condiments in our fridge and nothing but a couple of pennies in our pockets. But that state is never permanent, and it can only bring us down if we let it, as these being broke quotes will show.

Not only is being penniless a temporary state, but it can even be beneficial for us. It forces us to be more creative, resourceful, and teach us to appreciate better what we have. However, we should never covet what others have or compare ourselves to them. At the end of the day, we’re all on our own journeys, trying to make the best out of what we have.

The 26 Best Being Broke Quotes

#1. “Nobody likes being broke. As somebody who’s had to live out of a 1982 Datsun, trust me, I know. I also understand that the first step to improving your situation is to fix the problem that landed you there in the first place.” — Steven Crowder

#2. “There is a difference between being poor and being broke. Broke is temporary, and poor is eternal.” — Robert Kiyosaki

#3. “You have to go broke three times to learn how to make a living.” — Casey Stengel

#4. “The truth is, few people ‘think’ big, and even fewer ‘play’ big. Why? Because ‘big’ often means big responsibilities, big hassles, and big problems. They look at that ‘bigness’ and shrink. They’re smaller than their problems. They back away from challenges. Ironically, they back themselves into the biggest problem of all — being broke, or close to it.” — T. Harv Eker

#6. “If you’re perpetually broke, you should be working hard at overcoming stupidity and not getting rich.” — Taiwo Abraham

#7. “No one ever went broke by taking a profit.” — Jesse Lauriston Livermore

#8. “If you’re broke, you don’t want to rap about being broke; you gonna rap about hustling and getting that bread.” — Juicy J

#9. “I’ve tasted the dirt side. I’ve tasted being broke. I’ve been in the dumps, I’ve lived in motels as a kid. I want a different opportunity for my children. I never want them to see those things.” — Tito Ortiz

#10. “The best thing that ever happened to me is that nothing happened in writing. I ended up working for engineering companies, and that’s where I found my material — in the everyday struggle between capitalism and grace. Being broke and tired, you don’t come home to your best self.” — George Saunders

#11. “When everybody has got money, they cut taxes, and when they’re broke, they raise ‘em. That’s statesmanship of the highest order.” — Will Rogers

#13. “People who go broke in a big way never miss any meals. It is the poor jerk who is shy a half slug who must tighten his belt.” — Robert Heinlein

#15. “The hatred of money is generally a subconscious attempt to alleviate the pain of being broke or poor.” ― Mokokoma Mokhonoana

#16. “Being broke is a very efficient educational agency.” — Edwin Lefevre

#17. “If you’re planning only to make money and nothing else, you’ll be broke.” — Haile Gebrselassie

#18. “Basically, I chose not to identify with being broke any longer. I realized I deserved a beautiful life, and abundance was something that I needed to welcome into my life.” — Jen Sincero

#19. “It doesn’t matter how big of a company you have; I always tell people that you are one job away from being broke. And if you don’t live that way, you’ll be broke.” — Dakota Meyer

#20. “Being broke and poor, I mean, you grow up in the environment I grew up in, grew up hard and grew up poor. Your mom doesn’t have a car until you make it to the NBA, no telephone. So I mean, if you grow up like that, and you’re able to make it to this level and be blessed the way I’ve been blessed, it’s always great to give back.” — Tyronn Lu

#22. “Being broke is against my religion.” — Curtis Jackson

#23. “You can have a Master’s degree in making money, but you will still wind up broke if you have a Ph.D. in spending it.” ― Orrin Woodward

#26. “Learn all you can; don’t be lazy. Nothing’s worse than being stupid. Being broke is bad, but being stupid is what’s really bad. And what’s really really bad is being broke and stupid. Nothing’s much worse than that. Unless you’re sick. Sick, broke, and stupid; that’s about as far as you can fall unless you’re ugly. Surely that would be the ultimate; ugly, sick, broke, and stupid.” — Jim Rohn

I hope these being broke quotes inspire you and help you better appreciate what you have in life. At least that’s what they’ve done for me.

In fact, they’ve helped me through countless hardships and tough times in my life when I felt completely hopeless. After I got out of my penniless state, I felt stronger for having gone through it, and so will you.