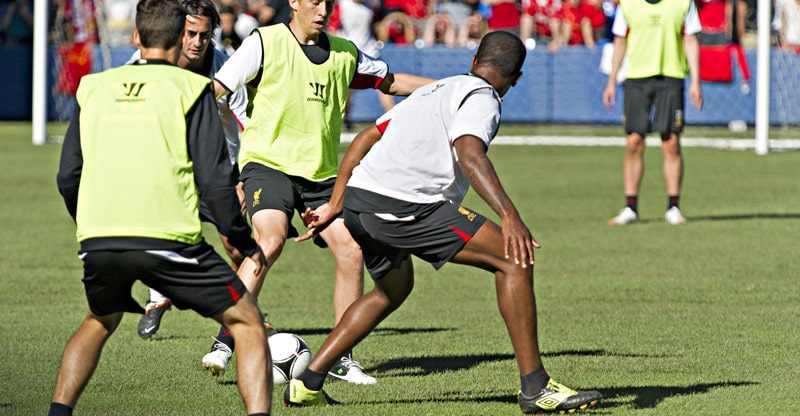 In soccer, the position of midfielder acts as the go-between for the attack and defense and helps manipulate the game’s outcome from the center of the field. A team’s victory often hinges on the midfielder’s activity during the game, who are known for netting winning goals.

This article will include some of the best midfielders in the game who have really made an impact on behalf of their team, league and country. This list is current as of 2021 and includes midfielders from all across the world.

Thiago Alcantara got his start in Barcelona, but his meteoric rise to the top really took place on the Bayern Munich team. He has been considered one of both teams’ best players during his career at each club.

Currently, Thiago is at Liverpool Football Club, where he continues to make waves with his sensational performance on the field. He is smart, quick, adaptive and keeps viewers on the edge of their seats. Some of his key strengths include passing, defensive play and ball control, with particularly exceptional pass accuracy.

With so much talent and potential, Thiago Alcantara is turning eyes towards Liverpool where he is definitely a midfielder to watch out for when it comes to finding the next player who will go down in history as one of the greats.

Joshua Kimmich has really impressed fans and commentators alike during his time at Bayern Munich. In a short time, he has gone from a full back to a defensive midfielder, and his rise through the ranks has made for riveting viewing for fans. He also undoubtedly helped Bayern win the table in the ’19-20 season.

A particular talent of Kimmich’s is his defense, making him one of the best players in his position, bar none. He’s also a very creative player who plays defense with an offensive style, making him a powerhouse in the center of the field.

Not only is he extremely skilled as a midfielder, but Kimmich has also proven that he is more than capable in any position on the field with his experience as a full-back, where he dominates the competition. He is an expert at winning possession and creating opportunities for attackers, as well as man-marking and creating attacking passes, with a passing accuracy nearing 90%.

One of the players many soccer experts are looking at right now is Bruno Fernandes, who has proven himself to be an expert in attack and one of the best midfielders this season—often being favorably compared with the legendary Paul Scholes.

Fernandes currently plays for Manchester United, where he is widely considered to be a top player. He is extremely skilled at creating passing opportunities, as well as attacking play. He is a top player on the field in terms of finishing and taking penalties.

There is no question that Fernandes is critical to Manchester United’s success. Although he’s been a hotly debated player since joining the team, it was immediately clear that he was in it to win it — going on to rack up a total of 28 goals with only 17 assists in just shy of 60 games.

The stats are just incredible for any midfielder around the world. His match-winning performance helped him to step into the limelight. Manchester United is really looking at him as the future of the club.

His statistics are staggering for his position, making him one of the best midfielders not only in Europe, but in the world. He has captured the attention of fans and commentators alike and put a spotlight on Manchester United, a team that is looking to him to carry the club to glory.

With some of the greatest intelligible attacking and passing abilities we’ve seen in a long time, as well as the ability to score goals, Bruno Fernandes is undoubtedly on the path to becoming not only one of the best midfielders in the game today, but one of the greatest of all time.

N’Golo Kante is one of Chelsea’s biggest points of pride. In his current position as a defensive midfielder, he’s a strong contender for the Union of European Football Association’s (UEFA’s) best player award for his performance in the 20-21 season, after already ranking as the Professional Football Association’s (PFA’s) Player of the Year for 2017.

Simply put, N’Golo Kante owns the Premier League and has been doing so for a few seasons now. He is widely considered to be one of Chelsea’s best players, as well as one of the best players in his league — and in the game as a whole.

Some of his key strengths include defense, acceleration and creating opportunities for attackers, and Kante is currently at his peak in terms of performance. All of this puts him right near the top of our list of players to look out for in 2021.

There is no question that Kevin De Bruyne is one of the most legendary midfielders of his time. He may be one of the most talented midfielders overall to ever play the game of soccer. His skill set includes passing, dribbling, tackling and creating opportunities for other players.

With incomparable passing accuracy and finishing abilities, De Bruyne is a formidable player in front of goals. Originally from Belgium, De Bruyne helped Manchester City win the Premier League competition in the ’17-18 season, earning the rank of the best player in the league in ’19-20.