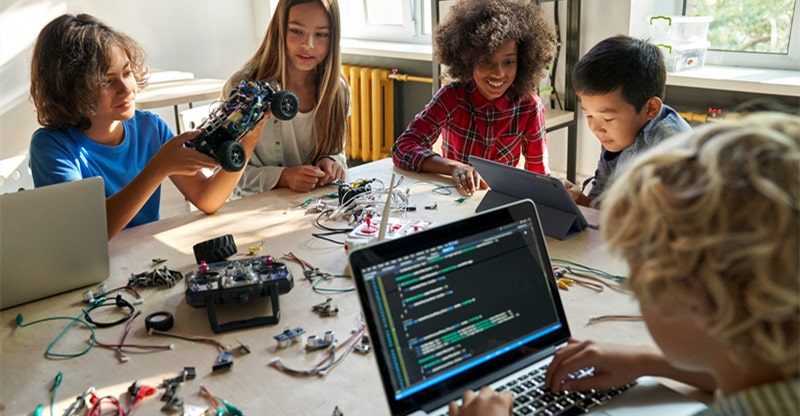 Due to technological advancement across the world, technology has become an essential aspect of our lives. The need to teach kids coding and make them familiar with coding skills is also very important. Recent research has elevated coding to the forefront of children’s future skills. Kids coding classes could provide children with a variety of opportunities to engage in creative and logical thinking, planning, and developing a problem-solving mindset.

However, parents are not pretty sure about teaching their kids coding. According to most parents, kids should solely focus on academic achievements. Also, few parents perceive coding as a waste of time and it will cause a loss of concentration power. There are many speculations or myths.

Myth: A kid should be proficient in maths and science to do coding.

Fact: Because coding isn’t yet part of the Indian school curriculum, adults have a lot of misconceptions about the fundamentals of coding. They mistakenly believe that because coding is a computing skill, one must be a mathematician or a science champion to code. To be a good coder, however, basic math skills and a problem-solving attitude and ability are all that are required.

Myth: If kids learn to code, they will only land up in the field of coding or become a coder only!

Fact: Experts believe that coding will soon become a life skill, as technologies such as artificial intelligence, augmented reality, and robotics will define the world around our children. Kids coding classes are thus a method of preparing and equipping them for success in a digitalized future.

Learning to code also helps children develop critical cognitive skills and gain a better understanding of their environment. It should not be viewed solely as a ticket to a career as a coder or software engineer.

Fact: Children as young as Grade 6 can begin learning HTML, CSS, and JavaScript to build websites. They also begin learning Python and Java in Grade 8 to understand how programming languages work and to write complex code.

The most recent National Education Policy (NEP) has recommended many fundamental changes in India’s educational structure, including the introduction of children to kids coding classes. The revised NEP guidelines promise to liberate our children from antiquated learning experiences, with a renewed emphasis on developing them into creative, intelligent, and future-ready individuals.

Learning to code at a young age will undoubtedly help to realize this vision. All of these languages are at least 20 years old and continue to power the modern Internet as we know it today. These facts debunk the widely held belief that coding languages change frequently and would be useless to children as a future skill.

Myth: Coding is not meant for your children

Fact: Many parents believe erroneously that their child is too young to learn to code and that they will be better able to understand programming languages as they get older.

Scratch and other visual learning languages are relatively simple to learn. Scratch allows children to learn to code by using various images, signs, and diagrams, and later on, they can begin learning more advanced languages such as Python.

Fact: Coding necessitates breaking down a complex problem into smaller ones and then solving them. When children use coding to create something of their own, they can immediately see the result, which motivates them to learn more. Kids coding classes can encourage kids to think of multiple solutions to a problem, which increases their creativity and problem-solving skills.

Time spent learning coding should be realistically regarded as time spent learning. Furthermore, the time it takes a child to learn to code can be easily monitored and controlled. Often, just 4-5 hours per week, or an hour per day, is sufficient for them to experiment.