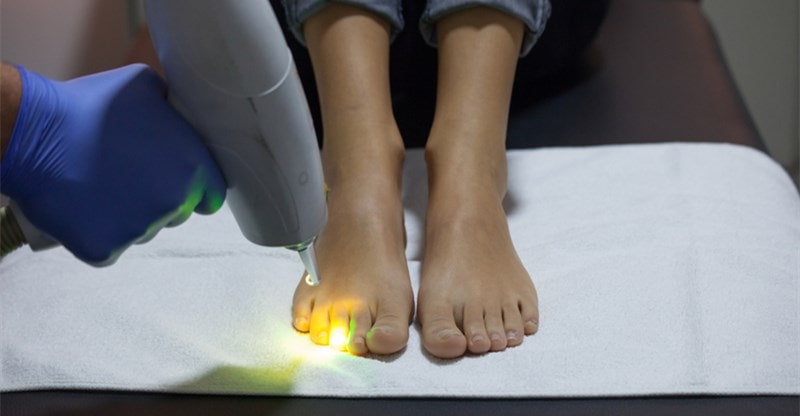 Fungi and bacteria are usually present in various places on and in the body but a fungus infection occurs when a fungus starts to overgrow. Hence several parts of the body are susceptible to fungal infections. The nail is one of the places affected by a fungus infection. Nail fungus, also known as onychomycosis, affects both the fingernails and the toenails but it is more common with the latter.

Nail fungus usually starts as a yellow or white spot beneath the tip of the nail and then causes discolored, thickened, and crumbly nails as it runs deeper. Besides this ugly effect on the nail, nail fungus can equally be painful. This infection is a very common one and is the most common nail problem. It spreads very fast from nail to nail as well as could affect the surrounding skin.

Nail fungus thrives in a moist, warm, and dark environment. Treating nail fungus is usually a very challenging journey that requires a few months for complete cure hence patience and consistency are vital. It also has a very high rate of recurrence. Several factors contribute to the incidence of nail fungus whether it is toenails fungus or fingernails fungus.

1. Age: as we advance in age, the body begins to get too dry hence resulting in cracks in nails. When this happens, fungi can easily get in between these cracks and flourish. Also, the level of blood flow, especially to the extremes of the body, reduces with age which hampers the ability of the body to fight off infection through its soldiers in the blood. Slower growing nails is equally a factor.

2. Sweaty hands or feet: nail fungus thrive in a moist environment, therefore, a hand or foot that is always wet is more prone to nail fungus.

4. Lack of proper nail care: this is a very fundamental cause of nail fungus just like lack of proper care of other body parts is a key cause of health problems faced. This explains why the very first step in healing and recovery of nail fungus is proper nail care. The measures include keeping the nail well-trimmed, clean, and the feet and hands dry.

Other cares include not walking barefoot in a local swimming pool or a locker room.

5. Genetic: it’s been observed that there is a genetic side to nail fungus occurrence. People with this inclination must pay even greater attention to proper nail hygiene.

Nail fungus is quite difficult to deal with and relapse occurs more often than not. However, there are numerous cases of total and permanent healing. A number of treatment options such as medications, over-the-counter products, and natural home remedies are effective antifungal agents. Some of these treatment options have side effects, especially medications.

Most over-the-counter products and natural home remedies are safe for usage. In all this, the most important part of nail fungus treatment and prevention is making important lifestyle changes to meet proper nail care standards.

1. Regular washing of feet and hands: wash your hands thoroughly after every treatment of an infected nail and moisturize the nail afterward.

2. Keep nails well-trimmed: trim your nails properly by cutting it straight across and file it down if thickness has already set in.

4. Breathable shoes: wear shoes that are made of breathable materials.

5. Discard or treat old shoes: old shoes are breeding grounds for fungal infection, discard them, or use antifungal powders or disinfectants to treat them.

7. Reduce the use of nail polish and artificial nails.

8. Treat your nail clippers after each use.

EmoniNail is one of the most effective over-the-counter products for treating nail fungus. It is a natural topical solution loaded with antifungal properties that destroys nail fungus and restores a clear and healthy nail. One of its key agents is tea tree oil which on its own is a powerful home remedy for nail fungus.

EmoniNail contains undecylenic acid which belongs in fatty acids, a similar compound found in the skin. This gives EmoniNail deep penetrative ability and enhances its effectiveness in treating nail fungus. It is safe and easy to apply.

In my conversation with families, friends, and clients, negligence in the treatment of nail fungus is worryingly considered nothing serious. This is mostly due to the seemingly harmless nature of nail fungus especially given the fact that it is normal for nails to look different as we age.

Though a good proportion of nail changes might not require special attention, it is vital to pay attention to changes in nail physiology as this may point to serious underlying health issues.

When you observe the symptoms of nail fungus, it is important to treat it promptly because if left untreated, nail fungus can cause difficulties with manual tasks, exercising, as well as walking, at the least.

What Happens If Nail Fungus Is Left Untreated

2. Spread of the fungus: a key characteristic of nail fungus is that it spreads fast. When left untreated, it can easily spread from finger to finger or toe to toe and the surrounding skin. This may lead to other problems such as athlete’s foot with itchiness, redness, and cracked skin as the symptoms.

Also, it can spread to the genitals, causing a condition called jock itch. It, therefore, becomes important to treat nail fungus promptly.

3. Widespread infection: as mentioned earlier, nail fungus could point to serious underlying health issues like diabetes and cancer that weaken the body’s immune system. In this case, failure to treat the fungus causing spreading to the skin where it causes breaking or cracking will give room for an invasion of bacteria which may result in cellulitis.

Cellulitis can become severe, entering the bloodstream where it could be life-threatening. This and many more infections can result from the failure to treat fungal infection.

4. Loss of nails: if nail fungus is left untreated, it may ultimately cause loss or removal of infected nails. Infected nails could separate from the nail bed hence necessitating removal of the nail.

Even when the nails did not separate from the nail bed, removal of nails may be necessary if the infection has been allowed to reach an advanced stage such that traditional treatments have become effective.

How to Prevent Toenail Fungus

According to a popular saying, prevention is better than cure. It is always better to prevent toenail fungus from developing in the first place or reoccurring. There are simple guidelines that will help you steer clear of nail fungus. they include:

1. Cut your nails correctly: incorrect cutting of nails is one of the most common causes of nail problems. Cut nails straight across; not round the nails. Use sanitized nail tools and always keep your nails short. Beware of excessive cutting of the nail as this may result in problems such as ingrown toenails.

2. Observe good foot hygiene: fungus thrives in warm, moist, and dark environments, hence always keep your feet clean and as dry as possible. If you have sweaty feet, use powder (preferably antifungal powder) when wearing shoes to absorb the moisture.

3. Do not walk barefoot in public spaces: public spaces such as a locker room and community swimming pool are thriving grounds for nail fungus hence it is vital to take precautions. Avoid walking barefoot in these places in order to reduce the risk of developing nail fungus.

6. Disinfect or discard old shoes: old shoes are breeding grounds for nail fungus, discard them. If you must wear them again, make sure they are properly disinfected.

7. Keep shoes dry: a moist environment is a conducive one for nail fungus, make sure your shoes are always dry. Keep them in dry rooms and dry them frequently.

8. Buy breathable shoes: your toes will be less vulnerable to toenail fungus if air circulation is great. This will keep the toes as dry as possible.

Nail fungus cannot be handled lightly; inspect your nails frequently and take prompt actions when you notice any changes to avoid any of the implications of not treating nail fungus. It is better to prevent the development of nail fungus by observing the dos and don’ts highlighted above.