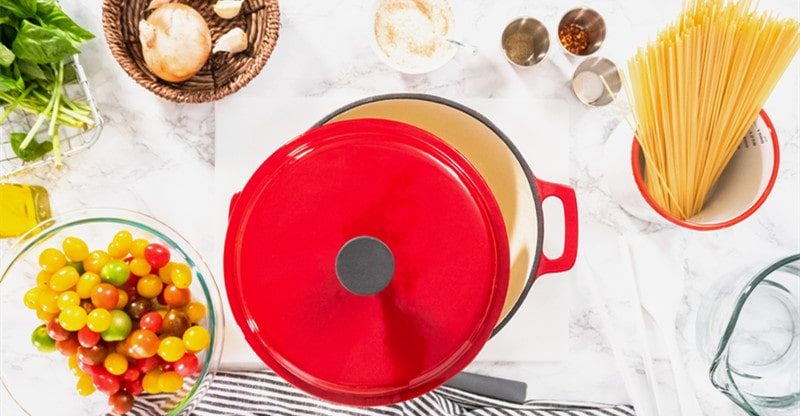 Summers are for beaches and cool drinks and laughter spilt over family dinners. No one wants to spend the gloriously sunny summer months hunched over and toiling away in front of boiling hot ovens while getting dinner ready. Delicious food – like all good things in life – should be simple. And nothing strikes that perfect balance between delicious and efficiently simple like a dutch oven pot.

The Dutch oven is efficient enough to let you prep, set, and forget meals as you spent time relaxing and reconnecting with friends and family over a cold beer or two. So, just in case you have taken the plunge and bought yourself one of these handy companions, below is a list of delectable recipes you can cook in your new Dutch oven:

Nothing says hearty family dinner than a steaming hot pot full fragrant, tomatoey spaghetti that leaves everyone hungry for more. As easy to cook as it is to prep, this entire recipe takes under an hour to make and is the perfect answer for days when you want to whip up something fast and filling without breaking a sweat.

• Fill the Dutchoven with water. Add a pinch of salt and bring it to a boil. Cook the spaghetti in it till it is al dente.

• Drain the spaghetti but remember to set aside at least a cup of the starchy pasta water. Toss the noodles in some virgin olive oil so they don’t stick together.

• Run the Dutch oven under water and put it back on the stove. Once warm, put butter in the pot before adding the green beans, garlic, and radish. Season with a bit of salt and pepper. Let it all cook on medium heat for about three to four minutes. Stir often.

• Throw in the spaghetti, artichokes, tomatoes, pesto, olives, and about half of the parmesan. This is when you add the pasta water before letting it all cook. Toss the ingredients together so the flavours are distributed evenly.

• Right before taking it off the heat, add in the mozzarella. Let it cook for a minute before taking off heat. Garnish with the rest of the parmesan, basil leaves, arugula, and pepper. Serve hot.

Light yet surprisingly hearty, this soup is perfect for heady summer evenings spent amidst laughter and familial bonding. And it takes only half hour to prep and cook in a Dutch oven so you can spend the rest of the time to relax and crack open a beer or two with friends.

• Heat oil over medium heat in your Dutch oven before sautéing the onions in them.

• Make sure the onions are tender before adding garlic, chillies, cumin, and the jalapenos. Cook for a minute before adding the tomatoes, sauce, and broth. Bring to a boil before stirring in the chicken.

• Let the concoction simmer over low heat for about ten minutes. Then add lime juice, salt, pepper, and cilantro.

• Add oodles of cheese on top and serve hot.

3. Pork and Orzo, a Mediterranean delicacy

This delicious meal may be fast to fix but it’s warm, inviting flavours can make your tastebuds dance. Full of Mediterranean flavours, this dish too takes less than half hour to prep and cook and is the definition of the perfect little meal in a bowl.

• One and a half pounds of pork tenderloin
• One tsp of pepper, coarsely ground
• Two tbsp of olive oil
• Three quarts of water
• One and a quarter cups of uncooked orzo pasta
• A quarter tsp of salt
• Six ounces of baby spinach
• A cup of halved grape tomatoes
• Three-fourth cup of feta cheese, crumbled

• Make one-inch cubes of the pork loin. Rub it thoroughly with pepper while heating oil in a skillet over medium heat. Stir fry the pork in it for about ten minutes or less until it’s no longer pink.

• In a Dutch oven, boil water and add salt. Cook the orzo in it for about eight minutes before stirring in spinach. Cook until the orzo is cooked and the spinach has wilted and then drain.

• In the pan, add tomatoes to the pork and cook for a minute before stirring in cheese and the orzo mix.

Who said healthy meals could not be lip-smackingly delicious? This bright, vegan dish may just take you less than half an hour to fix, but that does not take away from the sheer hearty goodness of it. Herby and flavourful, this dish is especially perfect for especially hot days when you are hungry but craving something light.

• Put onions in your Dutch oven and sauté for a while till they are nice and tender.

• Add the spices, ginger, and the garlic and cook for a minute at least.

• Once the aromatics have cooked for a while, add in the potatoes and broth, stirring the entire time. Bring this concoction to a boil before turning down the heat and letting it all simmer for about five minutes.

• Add the okra and the kale. Bring this to a boil again and then let it simmer for all of 10 minutes (or more if the potatoes aren’t cooked enough).

• Finally stir in the peas, milk, tomato, and lime juice for added flavour.

• Serve hot to enjoy the creamy, umami goodness in all its glory.

Quick to fix yet definitely not lacking in flavour, this chicken pesto pasta recipe is perfect for movie nights with the family when you can’t be bothered to go through hours of prep to produce something delicious. It’s herby, it’s saucy, and, while definitely not traditional, this pasta recipe will keep everyone tucking into second or even third helpings.

• Boil water in a pot. Add a pinch of salt. Boil the pasta in it till al dente. Drain the pasta and set it aside. (Note: Remember to save a cup of the starchy pasta water for later use)

• For the sauce, add garlic to the Dutch oven full of all those chicken bits and flavourful oil. Also add lemon zest and cook the entire mixture for half a minute before deglazing with the wine and some lemon juice. Bring this mixture to a boil and keep cooking till there is only half left.

• Add the milk, cheese, and the sauce mix. Stir and add chicken till the sauce is thick and luscious.

• Toss the already cooked pasta into the mixture and toss until the pasta is thoroughly coated in the sauce.