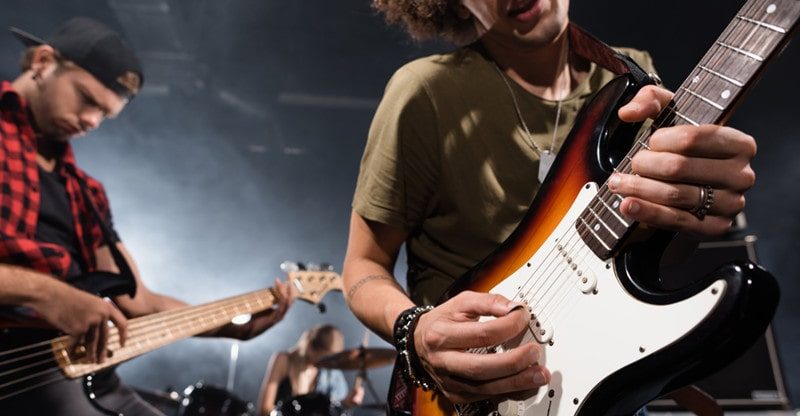 Rock music is the most popular music genre. Strong beat with use of the blues, that’s what makes rock n roll music. Rock music is more about sentiments rather than words. Rock musicians usually are passionate about feelings. Their songs are more lyrical than that of the narrative. Sadness and pain are emotions expressed.

To give their pain and sadness a name of rock music a musician creates such melody in the presence of rock instruments: electric guitar, electric bass, electric organ, or electric piano.

Electric guitars are used for rock music. These types of guitars use amplification that turns vibration from the strings of the guitar into electric impulses that further decodes into sound by the loudspeaker. The sound created can further be modified, shaped, or electronically altered to attain numerous mixed tonal variations. This makes it quite different from other types of music.

As a musician who is fond of rock music and wants to depict its emotion in the genre of rock n roll here are mentioned equipment needed to play electric guitar.

The electric guitar alone is of no importance As it cannot be heard without an amplifier. An amplifier will convert those vibrations into electrical signals that take the form of music when these impulses are further turned into sounds.

Either semiconductors or vacuum tubes or a combination of both are used by guitar amplifiers. There are dials in the amplifier that allow you to control the volume, tone, and vibration. Therefore, an electric guitar without its amplifier is mere vibrations nothing more.

These are an essential part as they connect the amplifier with the electric guitar. The audio cables are considered necessary in the equipment kit of the guitarist.

The high-quality sound, innovative spatial technology enables the creation of magic but without disturbing neighbors. Most wireless headphones for guitar amplifiers can still be great at two things at once – deliver the quality sound reproduction of the guitar amplifier and remove the mess of wires yet still maintain privacy.

These are connected between the electric guitar and its amplifier and before the vibration reaches the amplifier it can modify it and apply a special effect to it. Effect pedals give that unique tone to the music that is the specialty of this genre of music.

It creates different effects including distortion, fuzz, echoes, and flanges, etc. the professional uses sets of these pedals to create effects. Although these pedals are quite expensive they take your jamming sessions to the next level.

A musician is an artist and an artist knows how to carry an aura of perfection. Different accessories are used by musicians that compliment them and their guitars.

These are triangular and used to pluck guitar strings. These are selected usually based on its thickness while it comes in other forms as well other than triangular. But are selected according to the comfortability of the musician.

Electric guitars are heavy and need to be carried with a strap for convenience. It comes in a variety of styles and shapes and stuff but it depends solely on the taste and style of the musician. So if you’re planning to play in a crowd or for better grip on the guitar go for the guitar straps.

The tuner comes in two forms digitally or analog and can be plugged with a guitar or used externally. It measures the frequencies of the vibration produced by the guitar and displays them on the screen. It provides the range of notes necessary for something purposeful to play.

To summarize, the equipment used with electric guitar depends on whether a professional requires those or a beginner is looking for them. As the only necessary tool to play electric guitar except for electric guitar itself is the amplifier and thanks to the technology advancement the wireless headphones for a guitar amplifier that grant the musician to practice or perform with the bound of wires.