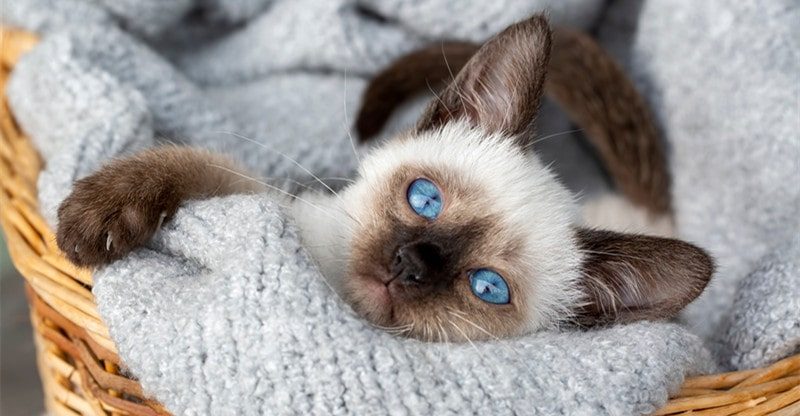 Siamese cats are an affectionate breed that is known for being perfect for new cat owners. They are beloved by many and have appeared in many pieces of media like ‘Lady and the Tramp’.

They are memorable for their pointed coats and blue almond-shaped eyes. Overall, Siamese cats are one of the breeds that everyone is able to recognize.

Despite their popularity, there are some facts that aren’t common knowledge. We have compiled 5 of the most interesting facts about Siamese cats so you can learn more about this beautiful breed.

1. Their Coat Is Affected By Temperature

Siamese cats come in lots of color variations including Lilac Seal Point Siamese and Blue Point Siamese. These color differences are characteristic of the breed and are what makes them so appealing. But did you know that these color changes are due to temperature?

When Siamese cats are born they are pure white, this is because they have come from a very warm environment. Over the next few months, they will gain a darker pigmentation in the parts of their body which are colder like the ears, nose, tail, and legs.

In the winter, the body of a Siamese cat may also get darker. While in summer, the dark parts may get lighter.

This is due to a mutated enzyme in their genes which affects melanin production. This gene then only becomes active in colder temperatures and darkens the fur.

However, these Siamese cats looked a little different than the modern-day breed. This is because they used to have crossed eyes and crooked tails. When they were brought over to the west and started appearing in cat shows, these traits were considered undesirable and people began to breed them out of the Siamese cat. Nowadays it is rare to find a Siamese cat with those traits.

3. They Are Very Talkative

If you own a Siamese cat, this isn’t a new fact to you. But for those of you who don’t, Siamese cats are very vocal. They love using their voice and having conversations with people.

This is a sign of intelligence as they understand that they are communicating with you. Unfortunately, their meow isn’t usually the sweet sound that comes out of other cat breeds. Instead, it is a low and strained sound that gave them the nickname ‘meezers’.

Siamese cats are very sociable cats, and their love for communicating reflects this.

4. Siamese Cats Have Difficulties Seeing In The Dark

When compared to other cats, Siamese cats have difficulty seeing in the dark. This is one of the reasons that they are so dependent on humans as they aren’t good hunters and are vulnerable during the night.

This weaker eyesight is because of a lack of a layer of tissue called Tapetum Lucidum on the eye. The lack of this layer also gave Siamese cats their iconic eye color. The purpose of Tapetum Lucidum is to reflect light, which reduces vision at night if it’s not there.

To compensate for this weakness, Siamese cats developed cross eyes. As previously stated, this trait was bred out of them.

5. They Are Considered A Royal Breed

There is a Thai legend that when the Ayutthaya Kingdom was sacked, the King of Burma read that having a Siamese cat made you wealthy. He ordered his men to round up all the cats and treasures to bring them back to Burma.

There was also a belief that when a royal family member died, their soul would inhabit that of a Siamese cat. This means that the cat was also treated like royalty.

As you can see, Siamese cats are one of the most interesting cat breeds with a rich history.

If you own a Siamese cat, you are now able to impress all your friends with knowledge of this amazing breed.

Even without all these fascinating facts, Siamese cats are a gorgeous and friendly breed that is a welcome addition to any home.