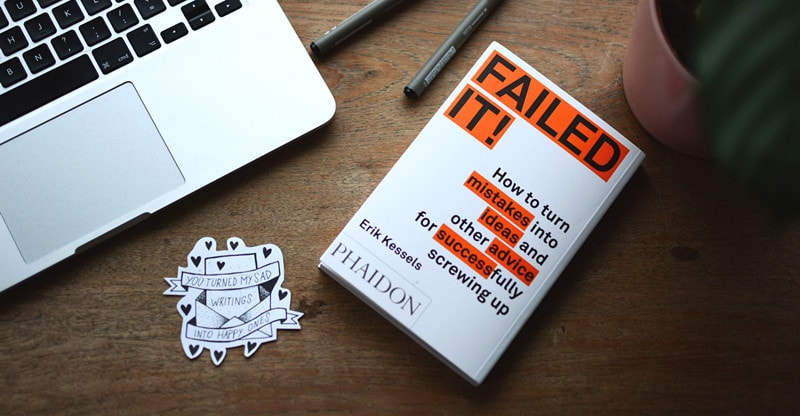 One attribute common to successful people is perseverance. If you closely study the lives of people who’ve made it big, you will find they all faced setbacks at various stages. People celebrate their success, but often miss out on acknowledging the struggle that got them there.

Overcoming fear of failure can help you reach your full potential in all aspects of life. The sooner you recognize that failure is a natural part of evolving into a winner, the happier you will be.

Here are inspirational life experiences of four successful icons whose failures are lesser-known than their glorious successes.

Born to a low-income teenaged mother, Oprah had a rough childhood. Not only were her living conditions difficult, she was also sexually abused. At the age of 14, she gave birth to her son who died shortly after being born.

Oprah’s focus shifted to studies and academic excellence. She was rewarded with a full scholarship admission to Tennessee State University. An internship at a local radio station was the first step in her media career. But, even after getting a job at a local television station in the news section, things didn’t go well for her. She was fired by the producer because she was deemed “unfit for television.”

Circumstances worked in her favor in 1983 when Winfrey received an offer to host a station’s low-rated talk show called AM Chicago. Within a few months, the show’s ratings shot through the roof and surpassed The Phil Donahue Show, which was the number one show at the time. This led to Oprah’s show being renamed ‘The Oprah Winfrey Show,’ which was syndicated across the country.

Takeaway: The darkest hour of the night comes just before dawn. Keep at it, until you see the shining light.

Before the inception of the multi-billion-dollar company Microsoft, Bill Gates met with failure in establishing a profitable business. Known today as one of the wealthiest men in the world, Bill Gates didn’t rely on his family’s wealth to support his entrepreneurial instincts. He experienced failure early in his career with his first business, Traf-O-Data facing a setback. The company was established in partnership between Gates, Paul Gilbert, and Paul Allen. Together, they aspired to generate reports for roadway engineers based on traffic data.

Although he failed at this business, it didn’t discourage him from trying again. Armed with lessons from the misfortune and his commendable business acumen, he set up Microsoft with his partner, Paul Allen. This time, he was able to form a company that captured a huge market share and revolutionized the personal computing marketplace.

Takeaway: There is no failure except in no longer trying.

Widely known as the creator of Harry Potter and his world, Rowling is undoubtedly one of the most inspiring people in the contemporary world. What most people don’t know is that she struggled tremendously before enjoying stardom.

Rowling first came up with the idea of Harry Potter in 1990 and began developing it into a fully-formed story as fast as she could. That year, her mother passed away after succumbing to multiple sclerosis. In 1993, her one-year-old marriage ended in divorce and she moved to Edinburgh with her daughter and three chapters of Harry Potter.

Without a job and with a dependent child, Rowling was struggling to make ends meet. She suffered bouts of depression and eventually subscribed to government-assisted welfare. She kept searching for publishers for the Harry Potter script. After twelve major publishers rejected her work, it was Bloomsbury, a small publishing house that accepted it. Even in a span of two years, the book was published with only 1000 copies, of which 500 were sold and the rest sent to libraries.

Rowling went on to win awards from Nestle Smarties Book Prize and the British Book Award for Children’s Book of the Year. Till date, the Harry Potter series has sold more than 400 million copies and Rowling is considered the most successful woman author in the United Kingdom.

Takeaway: Only those who dare to fail greatly can ever achieve greatly.

Now hailed as one of the pioneers of cartoon creation and animation, Walt Disney was once considered a failure. When working with the Kansas City Paper, Disney was fired by his editor, citing the reason that he “lacked imagination and had no good ideas.”

Subsequently, he tried establishing a business venture. Soon, his cartoons gained popularity in Kansas City. This first enterprise went bankrupt when he acquired an animation studio, Laugh-O-Gram. He was unable to manage the money and pay his employees. As a result, he had to file for bankruptcy and shut shop.

However, this did not stop Disney from working on his sketches. Soon after the bankruptcy, he moved to Hollywood, California. This experience hurt his self-esteem and he worked harder to establish the Walt Disney Company. With learnings from his past failures, he was able to maneuver the company through various challenges and become a successful businessman.

The company is a key player in children’s entertainment media and produces cartoons, animated movies, and merchandise, among others. It has successfully touched the lives of millions of kids and adults across the globe. It is Disney’s sheer willpower and belief in his talent that led to the inception of Mickey Mouse and other remarkable fictional characters.

Takeaway: Success is stumbling from failure to failure with no loss of enthusiasm.

Facing failure is never enjoyable. The thought of starting something new from scratch after being dejected is daunting. You are bound to fear failure, try to avoid it by playing it safe, and ultimately accept defeat.

You may live in this fear for a long time, unless you pick yourself up and challenge yourself to come up with unique and unconventional plans to make your dreams a reality. You will cherish victory more when it is achieved after facing great difficulties. In several situations, life will throw curve balls at you. However, your tenacity, motivation, and confidence along with the lessons learnt will help you tackle them in the best way possible.