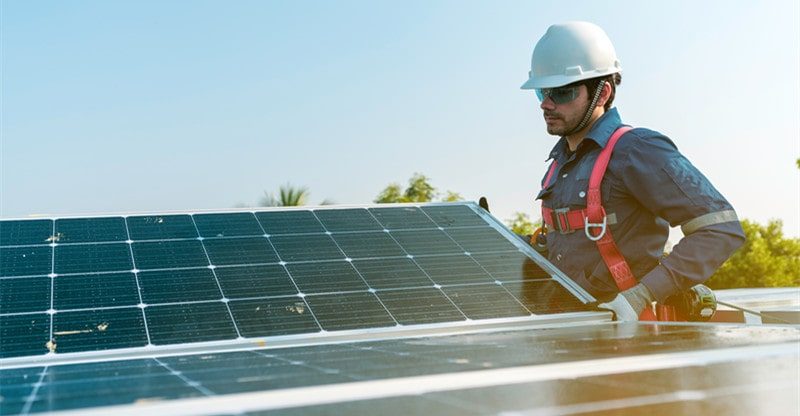 With the Energy Policy Act of 2005, the government initiated one of the most significant financial incentives for residential and commercial solar energy systems. It was an act set to expire only two short years after initiation, but it has seen several extensions since.

However, the benefits begin to wither with each passing year, even with additional extensions.

Unless Congress decides to extend the solar investment tax credit (ITC), the total claimable amount will fall from 26 percent of the total cost of solar installation in 2022, down to 22 percent for systems installed in 2023, and will eventually end in 2024.

The ITC is a major driver in many people’s decisions to install a solar power system. In this guide, you’ll discover what the solar investment tax credit is, how the tax credit works and more.

What Is a Federal Solar Tax Credit?

In short, the federal solar tax credit or ITC is tax credit homeowners and businesses can claim on federal income taxes. To clarify, the ITC isn’t a tax deduction or rebate.

It’s a way to reduce what you owe in taxes for the tax year that you install your system dollar-for-dollar. For example, if you were to install your solar power system and claim $1,000, then the tax credit would reduce your federal income taxes due by $1,000.

The decline in tax credit with each passing year is notable, considering those who installed their solar power systems before December 31, 2019 were eligible to receive a 30 percent tax credit.

Although the ITC is applied to the solar panel cost and installation, there is no maximum to the amount you can claim.

How Does the Investment Tax Credit for Solar Work?

Tax credits are a dollar-for-dollar reduction on the taxes you owe. So if you have a solar power system installed for $40,000 in 2022, you would be able to claim a 26 percent tax credit.

That means you would save $10,400 on your federal tax return for the tax year that the system is installed and activated.

Assuming your tax liability is less than $10,400, then the remainder of the credit will roll over and apply to your federal income taxes for up to five years. However, it’s important to note that the tax credits will never be given as part of a tax refund.

To claim the ITC on your federal income taxes, you must meet every one of the following criteria:

• The system must be a new and original installation or used for the first time. Repurposing or reusing an existing system is cause for ineligibility.

• The solar PV system you wish to claim must be installed at the primary or secondary residence within the U.S.

• Off-site community solar projects within the U.S. are eligible if the generated electricity is credited against and does not exceed home electricity consumption.

• You must own the solar power system. Owning the system here means that you purchased it with cash outright or are financing. You cannot claim the ITC if you are leasing or have arrangements to purchase the generated electricity generated by the system.

Although there are numerous types of solar cells, the tax credit only covers solar photovoltaic (PV) panels or PV solar cells. Similarly, the batteries are only covered as long as it stores energy generated solely by PV panels or cells.

In addition to federal incentives, it’s worth doing research or asking your local solar provider for any information regarding state and city-level incentives.

Often, states and local authorities will have programs in place to encourage their constituents to make the switch. This allows homeowners and businesses to not only save on their federal income tax but double-dip and save on a state and local level as well.

Some of the other types of solar incentives include:

As mentioned earlier, the ITC differs from tax deductions and rebates. Rebates for solar power systems are generally given as a partial refund to the new owner once they purchase their system.

The process involves purchasing the system directly from the solar provider, and then filling in paperwork to get a rebate from the local utility company or another organization responsible for the program.

Another option to double-dip for additional savings is determining if your state has its own state tax credits.

While it’s best to ask your local vendor for any state-specific incentives, you can use the Database of State Incentives for Renewables & Efficiency for a quick overview.

The Cost of Going Solar

There are many ways solar power systems help homeowners save that go beyond reducing or eliminating energy bills. The federal solar tax credit and other state and local incentives work to make going solar a more affordable and cost-effective option.

With the clock ticking on the federal solar tax credit, the benefits of making the switch to solar sooner than later are much clearer.