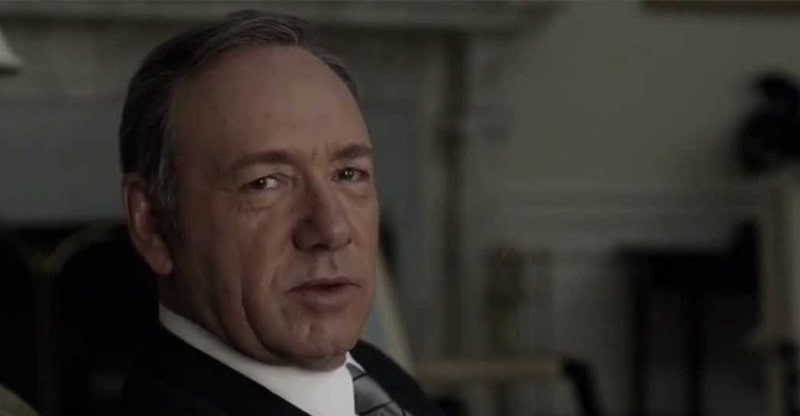 Ever since House of Cards first came out in 2013, Frank Underwood has shocked audiences across the world. His wisdom and brutality are not something people have seen before — and for a good reason. He is calculated and conniving — just like these spectacular Frank Underwood quotes will show.

At times, watching Kevin Spacey portray this character has sent chills down my spine and left me in awe at the same time. So, to commemorate this notoriously captivating character, here are the best 38 Frank Underwood quotes.

#1. “You see, Freddy believes that if a fridge falls off a minivan, you better swerve out of its way. I believe it’s the fridge’s job to swerve out of mine.”

#2. “From this moment on, you are a rock. You absorb nothing, you say nothing, and nothing breaks you.”

#4. “I’ve always said that power is more important than money. But when it comes to elections, money gives power… well, a run for its money.”

#5. “When they bury me, it won’t be in my backyard, and when they come to pay their respects, they’ll have to wait in line.”

#6. “Proximity to power deludes some into believing they wield it.”

#7. “There’s no better way to overpower a trickle of doubt than with a flood of naked truth.”

#8. “A great man once said, everything is about sex. Except for sex. Sex is about power.”

#9. “It’s so refreshing to work with someone who’ll throw a saddle on a gift horse rather than look it in the mouth.”

#10. “Do you think I’m a hypocrite? Well, you should. I wouldn’t disagree with you. The road to power is paved with hypocrisy and casualties. Never regret.”

#11. “Power is a lot like real estate. It’s all about location, location, location. The closer you are to the source, the higher your property value. Centuries from now, when people watch this footage, who will they see smiling just at the edge of the frame?”

#12. “Presidents who obsess over history obsess over their place in it, instead of forging it.”

#13. “Do you know what separates politicians from the rest of the species? A politician is the one who would drown a litter of kittens for 10 minutes of prime time.”

#14. “There’s our justice, the kind men create. We base it on things like the Ten Commandments. But those can be read a million different ways.”

#15. “Sometimes I think the presidency is the illusion of choice.”

#17. “I asked the reverend once, “What are we supposed to do in the face of so much senseless pain?” And he said to me, “What else can we do but take what seems meaningless and try to make something meaningful from it?”

#18. “We both know something the rest of the world refuses to acknowledge. There is no justice, only conquest.”

#19. “I’ve always loathed the necessity of sleep. Like death, it puts even the most powerful of men on their backs.”

#21. “There can be no false steps now. The higher up the mountain, the more treacherous the path.”

#22. “You wanna know what takes courage? Keeping your mouth shut, no matter what you may be feeling. Holding it all together when the stakes are this high.”

#23. “Stay with me. It’s us against them. Always. Otherwise, what’s the goddamn point?”

#24. “The nature of promises, Linda, is that they remain immune to changing circumstances.”

#25. “If we never did anything we shouldn’t do, we’d never feel good about doing the things we should.”

#28. “I must make decisions every day that I hope are just. I don’t know right from wrong all the time. I wish I did. But what I can’t be is indecisive.”

#29. “The best thing about human beings is that they stack so neatly.”

#30. “Every kitten grows up to be a cat. They seem so harmless at first — small, quiet, lapping up their saucer of milk. But once their claws get long enough, they draw blood. Sometimes from the hand that feeds them. For those of us climbing to the top of the food chain, there can be no mercy. There is but one rule — Hunt or be hunted.”

#32. “A little sibling rivalry isn’t such a bad thing, especially between adopted boys. They either push each other to be the best versions of themselves, or one of them gets booted back to the orphanage.”

#33. “From the lion’s den to a pack of wolves. When you’re fresh meat, kill and throw them something fresher.”

#34. “The only thing more satisfying than convincing someone to do what I want is failing to persuade them on purpose. It’s like a do not enter sign. It just begs you to walk in the door.”

#36. “Conscience has an unmistakable stink to it, sort of like raw onions and morning breath. But a lie stinks even more when it’s coming from someone who isn’t used to lying. It’s more like rotten eggs and horse shit.”

#37. “There’s nothing like a death in the family to separate the wheat from the bullshit.”

Frank Underwood is ambitious, smart, eccentric, and devilish. He is a man we all love to hate and can’t wait to watch. During his (in my opinion) short time on TV, Frank Underwood has captivated audiences and doled out a lot of wisdom.

So, to make sure this legend is never forgotten, I wanted to do my part and find the best Frank Underwood quotes and share them with all of you.