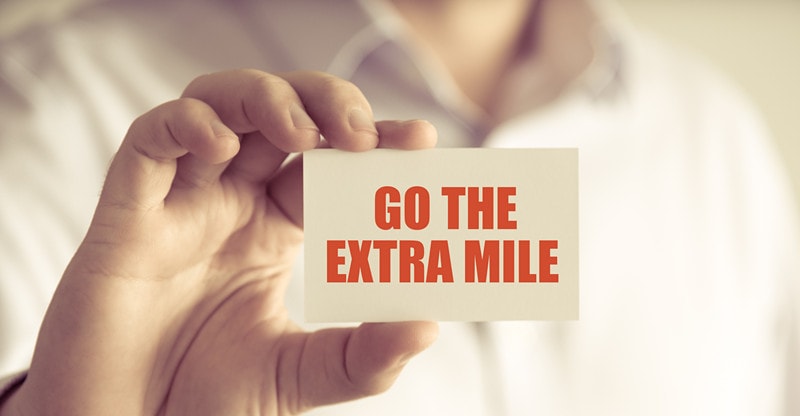 There are countless reasons going the extra mile is the right step for everyone. By committing to a cause and putting in extra effort, we can achieve great success and inspire others to do the same. With that said, finding the motivation to start working hard isn’t an easy feat.

So to help push you out of your comfort zone and help you see what you can accomplish in life, I’ve collected the 30 best going the extra mile quotes.

#2. “Today, do just a little bit more. Turn going the extra mile into a habit; it is what lifts most successful people above the crowd.” — Bob Proctor

#3. “If you want to succeed at any job, make yourself invaluable. Go the extra mile; make them never be able to imagine what life without you there would be like.” — Ross Mathews

#6. “One of the most important principles of success is developing the habit of going the extra mile.” — Napoleon Hill

#7. “You were saved not by work, but for work. Do it until all is done. By your inventions, innovations, initiatives, improvements, involvements, imaginations, information, interventions, and inspirations. Go the extra mile and dare to do it.” ― Israelmore Ayivor

#8. “The extra mile is a lot longer than the rest.” ― Clifford Thurlow

#12. “You’ve got to be able to work hard. And that’s what I do. I work hard because that’s what’s necessary. You have to go that extra mile.” — Tessa Blanchard

#14. “Why do I believe in going the extra mile? Because if I didn’t, the second-best version of myself would show up in my place.” — Shawn Anderson

#16. “Do more than is required. What is the distance between someone who achieves their goals consistently and those who spend their lives and careers merely following? The extra mile.” — Gary Ryan Blair

#17. “People of excellence go that extra mile to do what’s right.” — Joel Osteen

#21. “Don’t just manage. Go the extra mile and win your race. Never give up the fight. You will win.” ― Israelmore Ayivor

#23. “Stop blaming people for not helping you to solve your problems. The question is simple ‘are they the ones in the problem with you?’ People may teach you, people may advise you, people may inspire you, but it takes YOU to go the extra mile and make an indelible impact!” ― Israelmore Ayivor

#24. “You can start right where you stand and apply the habit of going the extra mile by rendering more service and better service than you are now being paid for.” — Napoleon Hill

#25. “Don’t accept the available as the preferable. Go the extra mile with extra speed.” ― Israelmore Ayivor

#26. “I think, as a performer, the biggest challenge is that you want to do a good job, pushing yourself. You want to go the extra mile every time.” — Elizabeth Henstridge

#27. “I do music that makes me happy by challenging myself to go the extra mile and not do what everyone else is doing.” — Jay IDK

#28. “I’m an entertainer. If people are paying good money for tickets, they deserve the best show they can see. I don’t get into lighting stuff on fire, but I do believe in going the extra mile.” — Bryan White

#29. “Going far beyond that call of duty, doing more than others expect — this is what excellence is all about! And it comes from striving, maintaining the highest standards, looking after the smallest detail, and going the extra mile. Excellence means doing your very best. In everything! In every way.” — Jack Johnson

#30. “We all know the dangers of sequels. Lightning doesn’t strike twice in the same place too often, and I think you’ve got to move beyond it — go the extra mile, and have the courage not to just repeat the first one.” — Colin Firth

There’s no one that can take the first step on the path to success other than you. You have to find the inspiration and power within yourself and work hard if you want to achieve greatness.

Even though it won’t be easy, once you’re on the other side, it’ll all be worth it. But if you’re feeling stuck or in a rut, I’m confident that these going the extra mile quotes will push you to make a difference in your life.