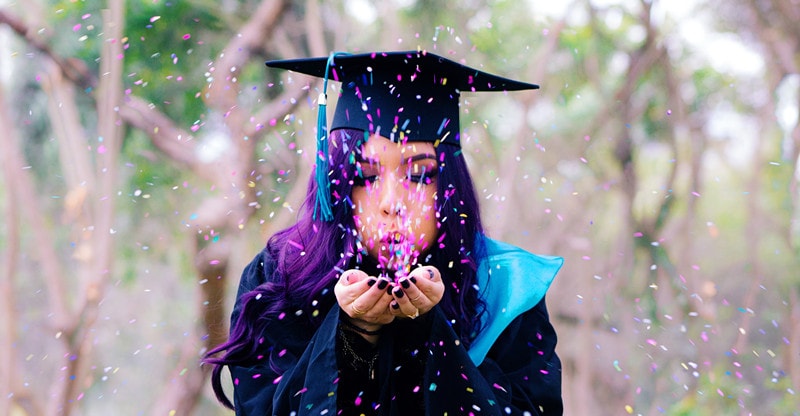 So, you’ve just graduated and are all set to launch yourself into the real world!

Whether it is middle, elementary, or high school that you have successfully completed, graduation day is meant to be celebrated as it marks the beginning of a new chapter in your life.

As you proudly put on your graduation cap and gown, a few thoughts that give you a glimpse of your life ahead will help you in shaping your priorities, defining success, and realizing your life’s true purpose.

Here are 30 remarkable graduation quotes that will inspire you to tread ahead confidently.

1. “And when your journey seems too hard, and when you run into a chorus of cynics who tell you that you’re being foolish to keep believing or that you can’t do something, or that you should just give up, or you should just settle—you might say to yourself a little phrase that I’ve found handy these last eight years: Yes, we can.” – Barack Obama to Howard University in 2016

2. “Don’t be afraid of fear. Because it sharpens you, it challenges you, it makes you stronger; and when you run away from fear, you also run away from the opportunity to be your best possible self.” – Ed Helms to Knox College in 2013

3. “Do all the other things, the ambitious things – travel, get rich, get famous, innovate, lead, fall in love, make and lose fortunes… but as you do, to the extent that you can, err in the direction of kindness.” – George Saunders to Syracuse University in 2013

5. “Do not worry too much about your lawn. You will soon find if you haven’t already that almost every adult American devotes tremendous time and money to the maintenance of an invasive plant species called turf grass that we can’t eat. I encourage you to choose better obsessions.” – John Green to Butler University in 2013

8. “You will be so many things, and the one thing that I wish I’d known and want to say is, don’t just be yourself. Be all of yourselves. Don’t just live. Be that other thing connected to death. Be life. Live all of your life. Understand it, see it, appreciate it. And have fun.” – Joss Whedon to Wesleyan University in 2013

9. “Don’t listen to the cynics – that’s the only piece of advice I will give you and of which I am absolutely certain. They were wrong about my generation and they’re wrong about yours.” – Joe Biden to the University of Pennsylvania in 2013

10. “Don’t just get involved. Fight for your seat at the table. Better yet, fight for a seat at the head of the table.” – Barack Obama to Barnard College in 2012

11. “The old rules are crumbling and nobody knows what the new rules are. So make up your own rules.” – Neil Gaiman to The University of the Arts in 2012

13. “Thankfully dreams can change. If we’d all stuck with our first dream, the world would be overrun with cowboys and princesses. So whatever your dream is right now, if you don’t achieve it, you haven’t failed, and you’re not some loser. But just as importantly—and this is the part I may not get right and you may not listen to—if you do get your dream, you are not a winner.” – Stephen Colbert to Northwestern University in 2011

14. “There are few things more liberating in this life than having your worst fear realized.” – Conan O’Brien to Dartmouth College in 2011

15. “The most important thing in your life is to live your life with integrity and to not give in to peer pressure to try to be something that you’re not.” – Ellen DeGeneres to Tulane University in 2009

16. “I was convinced that the only thing I wanted to do, ever, was to write novels. However, my parents, both of whom came from impoverished backgrounds and neither of whom had been to college, took the view that my overactive imagination was an amusing personal quirk that would never pay a mortgage or secure a pension. I know that the irony strikes with the force of a cartoon anvil, now.” – J.K. Rowling to Harvard University in 2008

17. “And how do you know when you’re doing something right? How do you know that? It feels so. What I know now is that feelings are really your GPS system for life. When you’re supposed to do something or not supposed to do something, your emotional guidance system lets you know. The trick is to learn to check your ego at the door and start checking your gut instead.” – Oprah Winfrey to Stanford University in 2008

18. “It is impossible to live without failing at something, unless you live so cautiously that you might as well not have lived at all—in which case, you fail by default.” – J.K. Rowling to Harvard University in 2008

19. “Sometimes you find out what you are supposed to be doing by doing the things you are not supposed to do.” – Oprah Winfrey to Howard University in 2007

20. “But real leadership comes from the quiet nudging of an inner voice. It comes from realizing that the time has come to move beyond waiting to doing.” – Madeleine Albright to the University of North Carolina in 2007

21. “If you are willing to stand for what you believe in… you won’t need advice from me, because you will be able to handle whatever comes.” – Whoopi Goldberg to Montclair State University in 2007

22. “Life is not easy for anyone. Sometimes you don’t see the challenges on the outside, but every single one of us has both those and everything that goes on inside as well. Give it your all. Dare to be all you can be.” – Hillary Clinton to the State University of New York, Buffalo in 2006

23. “There is nothing more beautiful than finding your course as you believe you bob aimlessly in the current. Wouldn’t you know that your path was there all along, waiting for you to knock, waiting for you to become? This path does not belong to your parents, your teachers, your leaders, or your lovers. Your path is your character defining itself more and more every day like a photograph coming into focus.” – Jodie Foster to the University of Pennsylvania in 2006

24. “Don’t be trapped by dogma—which is living with the results of other people’s thinking. Don’t let the noise of others’ opinions drown out your own inner voice. And most important, have the courage to follow your heart and intuition.” – Steve Jobs to Stanford University in 2005

25. “You get to consciously decide what has meaning and what doesn’t. You get to decide what to worship.” – David Foster Wallace to Kenyon College in 2005

26. “From my point of view, which is that of a storyteller, I see your life as already artful, waiting, just waiting and ready for you to make it art.” – Toni Morrison to Wellesley College in 2004

27. “Try never to be the smartest person in the room. And if you are, I suggest you invite smarter people, or find a different room.” – Michael Dell to the University of Texas in 2003

28. “Don’t ever confuse the two, your life and your work. The second is only part of the first.” – Anna Quindlen to Villanova University in 2000

29. “Whatever you choose, however many roads you travel, I hope that you choose not to be a lady. I hope you will find some way to break the rules and make a little trouble out there. And I also hope that you will choose to make some of that trouble on behalf of women.” – Nora Ephron to Wellesley College in 1996

30. “I encourage you to live with life. Be courageous, adventurous. Give us a tomorrow, more than we deserve.” – Maya Angelou to the University of California in 1977

Graduation marks the beginning of a new phase of life.

As you get ready to face the world, the pearls of wisdom listed above, borrowed from the best commencement speeches made by successful role models, will prepare you for a bright future.

They will inspire you to achieve greater heights and steer you on the path to success.