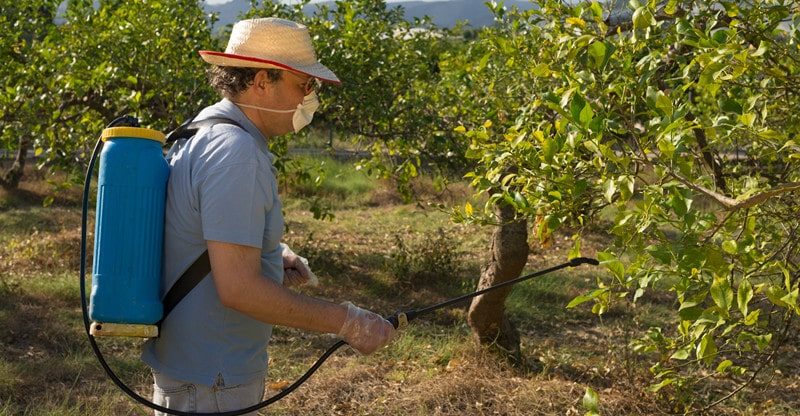 Paraquat, sometimes referred to as paraquat dichloride, is a chemical that is often used to kill weeds and unwanted plants.

Unfortunately, it’s also known for being especially toxic to humans and has the potential to cause serious health issues. In some cases, its use can even result in death.

While most paraquat products in the United States use additives—such as blue dye, a sharp odor, and a vomiting agent—in order to warn users, not all products use these types of additives. Paraquat can still be inhaled, ingested, and absorbed by the skin without the user being aware.

Despite it being banned in several countries and being restricted to only commercially licensed users in the United States, the use of paraquat continues to rise in the U.S.

Here are seven of the biggest potential health risks and symptoms that may come from using paraquat as your herbicide of choice.

1. Swelling of the Mouth or Throat

Immediate swelling of the mouth or throat is not only one of the most common symptoms of paraquat poisoning but it’s also one of the first warning signs that paraquat has been inhaled or ingested.

This swelling typically starts to occur as soon as the paraquat liquid makes contact with the mouth or throat and is accompanied by severe pain in these areas—making it an easy sign to identify before larger amounts of paraquat product are ingested.

Particularly when paraquat is inhaled, the harmful chemical can have a lasting negative impact on the user’s respiratory function.

Specific studies have observed a link between paraquat (as well as other pesticides) and lung function. Chronic wheezing, asthma, and shortness of breath are among some of the most common symptoms.

Inhaling a significant amount of paraquat can lead to severe lung scarring, and in extreme cases, it may even result in complete failure of one or both lungs.

Health experts have observed a clear link between the use of paraquat and the onset of Parkinson’s disease—a progressive degenerative brain disorder that affects the nervous system and for which there is currently no known cure.

In recent years, research has shown that people who have been exposed to traces of the toxic herbicide over a long period are roughly 2.5 times more likely to develop Parkinson’s disease than the average non-user.

Most of today’s products contain certain safeguards—such as an additive that will cause the user to vomit shortly after ingesting paraquat.

Naturally, the user should expect to vomit immediately after they eat or drink something that contains paraquat. Vomiting without any other negative impact on the digestive system is the best case scenario.

The reality is, however, that vomiting occurs after the product has been ingested, so this symptom is often accompanied by other digestive problems—such as burns to the esophagus or damage to the stomach and intestines.

Depending on whether the paraquat product is inhaled, ingested, or absorbed, the user may sustain damage to one or multiple organs. In the case of ingestion, paraquat might affect the esophagus or stomach; in the case of absorption, it may affect the body’s skin or blood vessels.

Paraquat also has the potential to cause significant damage to the user’s brain and nervous system—particularly when a user is repeatedly exposed to a product over a significant period.

Symptoms may be as mild as the occasional headache or confusion surrounding a specific fact or event. However, other potential side effects and conditions can be quite severe and highly debilitating.

In addition to Parkinson’s disease, an episode with paraquat has the potential to cause seizures and even comas.

The most severe and sobering consequence of paraquat poisoning is, as you might expect, death.

The product’s potency and toxicity are such that even as little as one sip can be fatal; and unfortunately, this is a relatively common outcome in these types of incidents. According to one study, the percentage of fatalities from acute paraquat poisoning exceeds 70%.

While many of these fatalities are accidents, deliberate ingestion of paraquat is often used as a means for suicide as well.

The truth is that paraquat is most deadly when it is in the hands of someone who does not understand the dangers of the product or how to use it appropriately and safely.

Given the extreme health risks associated with these products, here are a handful of important tips to keep in mind whenever you or another person is handling a paraquat product: