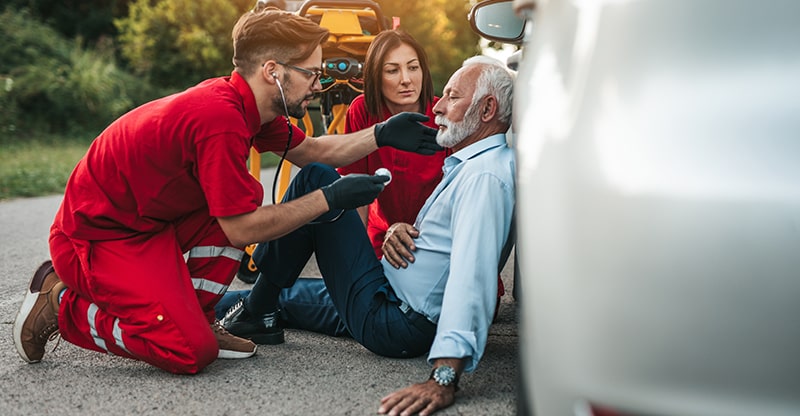 Cardiac emergencies can occur unexpectedly and are considered extremely life-threatening. The cardiovascular system is vital to all bodily functions and organs. When it malfunctions or ceases working altogether, this can result in fatality within a small window of time.

The symptoms associated with oncoming cardiac failure don’t always appear alarming at first, which is what makes cardiac emergencies so dangerous. It’s important to be aware of the signs and symptoms of a possibly imminent heart attack. These indications include:

In some cases, heart problems or failure can occur without pre-existing conditions or warnings. Immediate medical attention is crucial in a crisis involving a heart condition, and taking swift, proper action can save a life.

The Chain of Survival involves four steps that can increase the chance of survival by 90%, which decreases by 10% every minute of delayed response and treatment. Timing is critical in these situations, and even as a nonprofessional bystander, you can help save someone’s life by acting fast with appropriate responses.

The first thing you should do if you’re in the presence of someone who is experiencing heart problems is to activate the emergency response system by calling the number for local emergency services. While first responders are on the way, remember to keep calm in the meantime, and monitor the patient’s condition as best as you can.

The next step will likely involve cardiopulmonary resuscitation, or CPR, on the patient. Although this can be administered by anyone who has knowledge of the proper technique, it’s usually best delegated to someone who’s equipped with basic life support certification or BLS.

For most professional healthcare providers and medical emergency personnel, this certification is mandatory for them to attain and keep current with. However, many BLS certification courses are available to laymen and nonprofessionals, and provide a range of life support skills in addition to CPR.

Defibrillation is an emergency response to heart failure that entails delivering an electrical shock to the heart, with the intention to regulate the heart’s rhythm. It’s a common policy for many public areas to have automated external defibrillators (AEDs) on hand in case of emergencies. CPR and defibrillation should be administered within 3 to 4 minutes of cardiac arrest.

The patient will most likely be transferred to a hospital setting to be further treated and undergo a recovery process, depending on the severity of the victim’s heart condition. Critical care and advanced life support may be necessary while the patient is being hospitalized.

There are different types of heart conditions, with varied levels of urgency and threats to survival. The symptoms are similar among them, but it’s helpful to know some of the differences:

Caused by a coronary or clot blocking artery, this attack has slower onset. Symptoms include cold sweats, nausea, and, pain or numbness in the chest, arm, or face.

Also called a sudden cardiac arrest or SCA, this occurs more rapidly and with less warning. It’s commonly preceded by symptoms of chest pain and irregular heart rhythm, followed by ceased heartbeat and unconsciousness, and the high possibility of death if resuscitation techniques are not immediately administered.

This is also referred to by cardiologists as acute coronary syndrome, and is caused by reduced blood flow to the heart due to blood clots or other blockages in the arteries. It should be treated as a cardiac emergency, as it could be the prelude to a heart attack. It’s usually indicated by unexpected chest pains, pressure, or discomfort while at rest, and it can get worse over time if left untreated.

Having resources at hand and an emergency plan in place wherever you are is the best approach to being fully prepared in case of an urgent matter regarding cardiac health. In such a situation, on any level of urgency or severity, it’s imperative to remain calm and follow recommended guidelines for getting professional help as soon as possible.

It’s also important to sustain the patient’s condition as much as possible while help is on the way. Even if you aren’t a professionally trained medical personnel, you can still increase the chance of a victim’s survival by having awareness and knowledge of how to respond to cardiac arrest.