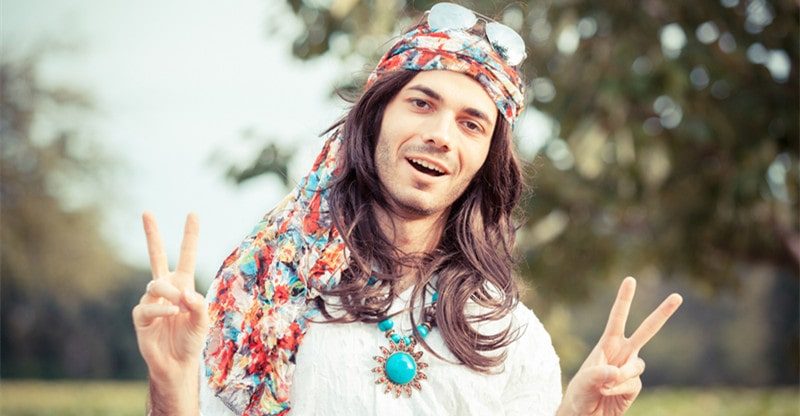 When you work in picture restoration, you get some perspective on the coolest time periods of the past century. There is no doubt that the 60s is one of the best out there in terms of what everyone was wearing and doing, especially the flower children.

The name “flower child” or “flower children” comes from the counterculture movement of the late 1960s. It started in San Francisco, but it spread throughout the US and especially gained traction on college campuses. Flower Children were followers of “Flower Power” and rebelled against the establishment of the 1950s.

If you are wondering why they were so cool, it’s because they were doing precisely what they wanted to, whenever they wanted to! It was an act of rebellion against the stifling rules of the “greatest generation” or their parent’s generation.

Unlike the world we envision when we think about the USA in the 1950s, with 50s housewives and perfect households, the 1950s were actually a tense time for America. The US fought a war in Korea, and the Cold War was raging in full force. The South was starting to rumble with the beginnings of civil rights.

Everyone was also afraid of being annihilated by a Russian bomb. The early sixties saw an escalation of tensions between the US and Russia, with the Cuban Missile Crisis and the Bay of Pigs. The war in Vietnam was starting to ramp up and opposition to the war started to coalesce around the youth.

It was in this environment that the “Flower Power” movement started to blossom in the late 1960s, especially in 1967, also known as the “summer of love”.

Beat Poet Allan Ginsburg is attributed to creating the term “flower power” to mean peaceful non-violent opposition to the government’s war. Followers of this movement were called “Flower Children” or hippies; most sources use the words interchangeably.

Followers of this movement often wore floral patterns or flowers in their hair. They gave flowers out to people, practiced non-violence, and preached peace.

Hippies Were Supporters of Equal Rights

Hippies were big supporters of civil rights. If you were a hippie in the sixties that meant you were against the inherent violence of segregation and you believed that everyone was equal.

This was a time of major segregation in the US and Civil rights were heating up all throughout the 1950s. And while not all Flower Children were activists, many of them were allies with the civil rights movement.

Many flower children were feminists and were part of the women’s liberation movement that flocked towards family planning and free love. Many of them rejected the housewifery that they were expected to aspire to and instead moved towards more self-actualized goals, like realizing their own dreams and postponing family life.

Hippies Were Against The War

One of the defining things about the hippie movement is that they were anti-war. Around this time, the US the conflict in Vietnam was heating up and the hippies were a part of the movement that stood up against the draft and protested the war. It was a war that was very unpopular with the youth and they let leadership know it.

Flower Children Were The First Eco-Warriors

Flower children were the original tree huggers. Many of them were vegetarians and anti-capitalism, engaging with it as little as possible. They farmed their own food and were proponents of clean and healthy eating before any Hollywood celebrities started the trend.

Long before we knew about the horrors of fast fashion, hippies were already flocking to rummage sales and thrift stores to put together signature looks. This wasn’t always just to save money – it was also to use fewer resources and wear what was already made rather than making new things.

Flower Children Had The Best Music

Psychedelic rock exploded, and artists were experimenting with sound and what music can be. The music from most of this time period is some of the most beloved even to this day, such as The Beatles, Janis Joplin, and Jimi Hendrix.

A lot of what the hippies stood for are values that we stand for today, but they dedicated themselves wholly to their movement. They stuck to their principles and tried to create their own rules to live well. They took force and answered it with non-violent rebellion. They also had great music.

That’s what makes them so cool.

There is a lot to learn from this time period, and the flower children and all those who followed the flower power movement are definitely important to use as an example. They were vocal about the change they wanted to see in the world and worked toward it. We should try and be a little more like the hippies in our lives!