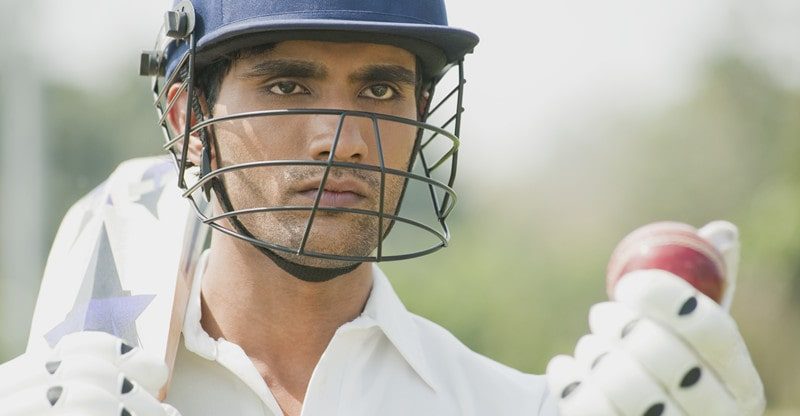 A growing number of Indian cricket players are vegetarian, and some of the biggest names in the sport that don’t eat meat products are Virat Kohli, Rohit Sharma, Ravichandran Ashwin, Bhuvneshwar Kumar, Shikhar Dhawan, Cheteshwar Pujara, and Ishant Sharma. Let’s find out a little bit more about each of these iconic Indian cricketers.

Virat Kohli was born in New Delhi, India, on November 5th, 1988, which makes him 33 at the time of writing. He has been a vegetarian since 2012, and in that time, he has stated that his fitness level in matches that are played over several days has dramatically improved. In 2018, he was voted by Time magazine as one of the 100 most influential people in the world.

He has won numerous national honours and sporting awards throughout his glittering career, such as the Arjuna Award in 2013, the Padma Shri award in 2017, and the Rajiv Gandhi Khel Ratna award in 2018. He first played for the Indian men’s national cricket team in 2008, and at a domestic level, the right-handed player has played for Royal Challengers Bangalore since 2008.

Rohit Sharma believes his impressive fitness levels are down to being vegetarian. The 35-year-old Indian international cricket player was born in Nagpur, Maharashtra, India, on April 30th, 1987. From 2008 to 2010, he played for Deccan Chargers, and then from 2011 to the present day, he has played for the Mumbai Indians.

He’s a right-handed player and known for being an opening batsman. In 2015, he won the Arjuna Award, and in 2020 he won the Major Dhyan Chand Khel Ratna award. He was a player in the ICC Men’s Team of the Decade and Team of the Year, plus he also won the 2019 ICC Men’s ODI Cricketer of the Year award.

Shikhar Dhawan is an Indian international cricketer who has played at club level for Delhi, Delhi Daredevils, Mumbai Indians, Deccan Chargers, Sunrisers Hyderabad, Delhi Capitals, and Punjab Kings. The 36-year-old left-handed opening batsman was born in New Delhi, India, in 1985 and made his debut for India back in 2010. In an attempt to shake off the rumours that he was a party animal, he became a vegetarian in 2018.

In 2021, he was awarded the Arjuna Award by the Government of India in recognition of his outstanding achievement in sports. He was the highest run scorer of the Asia Cup 2018, and he won the ICC World ODI XI in 2013, among other awards. For example, he won the Wisden Cricketer of the Year Award in 2014 and then during the Indian Premier League in 2020, he became the first player in the league’s history to score two consecutive centuries.

You can place bets on more records like this being broken in the upcoming season at numerous trusted sites. For example, 10CRIC offers the best cricket betting in India, and it’s free to sign up, probably one of the reasons it is so popular.

Ravichandran Ashwin is regarded by many as one of the best spin bowlers in the world. He’s right-handed, and the 35-year-old was born in September 1986 in Madras, Tamil Nadu, India. The vegetarian is also an all-rounder who has played for his country since 2010.

Some of the major teams he has played for in his career so far are Tamil Nadu, Chennai Super Kings, Rising Pune Supergiant, Worcestershire, Kings XI Punjab, Nottinghamshire, Delhi Capitals, Surrey, and most recently, Rajasthan Royals.

32-year-old Bhuvneshwar Kumar was born in Meerut, Uttar Pradesh, India, in February 1990. The right-handed bowler is known for being rather strict with his diet, eating only fresh vegetables. He has played for his country since 2012, and on a domestic level, he has played for several clubs, such as Uttar Pradesh, Royal Challengers Bangalore, Pune Warriors India, and Sunrisers Hyderabad, who in 2016 won the Indian Premier League.

Cheteshwar Arvind Pujara is a 34-year-old Indian international cricket player who has also played at a domestic level for Saurashtra, Kolkata Knight Riders, Royal Challengers Bangalore, Kings XI Punjab, Derbyshire, Yorkshire, Nottinghamshire, Chennai Super Kings, and Sussex. He made his international debut back in 2010, and he has been a vegetarian for many years.

The right-handed top-order batsman has broken numerous records throughout his career, one of which occurred in 2017 during a one-off Test match against Bangladesh. He scored 1,605 runs, setting a new record for the most runs by a batsman in an Indian first-class season. He also set a record when scoring his twelfth double-century in first-class cricket.

Ishant Sharma is a right-handed fast bowler who has played for his country since 2007. The 33-year-old is a strict vegetarian, and he was born in Delhi, India, in 1988. At a domestic level, he has played for Delhi, Kolkata Knight Riders, Deccan Chargers, Sunrisers Hyderabad, Rising Pune Supergiants, Kings XI Punjab, Sussex, and Delhi Capitals, and in February 2021, he took his 300th wicket in Test cricket playing against England.

Sharma is also a recipient of the Arjuna Award, being recognised for his outstanding achievement in the sport he loves the most.

Top vegetarian meals that are worth checking out

If you’re a fan of pasta dishes, then you may like to try cooling a Butternut Lasagne or a Roasted Cauliflower Pasta meal. One of the top vegetarian dishes that has also become extremely popular in recent years is the Indian Shepherd’s Pie, and if you enjoy any of these tasty meals, then you may also like to try Salad-stuffed Blackened Peppers, and a Parsnip, Mushroom & Barley Wreath.

If that’s not enough to whet your appetite, other popular vegetarian alternatives include Golden-glazed Carrot, Mushroom & Hazelnut Tart, Butternut Risotto with Leeks and Spinach, Black Pepper Tofu with Bok Choy, and Pot Pie with Roasted Butternut, Lentils and Kale.

If you perform a simple web search for any of these dishes that you like the sound of, you can find simple recipes, and you will find that most dishes take around 30 minutes or so to prepare.