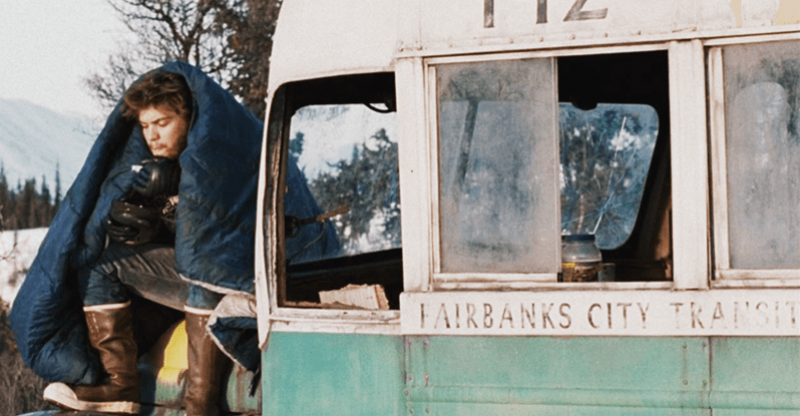 I confess that I am not much of a reader. However, every once in a while I enjoy reading a book. Recently, a friend recommended a nonfiction novel so splendidly charged with emotion and insight that, once I started reading it, I simply couldn’t put it down. So, I had to jot down some of my favorite Into the Wild quotes for your enjoyment.

Although Jon Krakauer’s Into the Wild explores a plethora of themes, I chose to hone in on those dealing with humankind’s innate adventurous spirit, youth, Christopher McCandless’ personality, as well as the author’s own character. The list concludes with some of the most iconic quotes that capture the essence of the book.

20 Inspirational Into The Wild Quotes

#1. “The core of mans’ spirit comes from new experiences.”

#2. “So many people live within unhappy circumstances and yet will not take the initiative to change their situation because they are conditioned to a life of security, conformity, and conservatism, all of which may appear to give one peace of mind, but in reality nothing is more dangerous to the adventurous spirit within a man than a secure future. The very basic core of a man’s living spirit is his passion for adventure. The joy of life comes from our encounters with new experiences, and hence there is no greater joy than to have an endlessly changing horizon, for each day to have a new and different sun.”

#3. “In coming to Alaska, McCandless yearned to wander uncharted country, to find a blank spot on the map. In 1992, however, there were no more blank spots on the map — not in Alaska, not anywhere. But Chris, with his idiosyncratic logic, came up with an elegant solution to this dilemma: He simply got rid of the map. In his own mind, if nowhere else, the terra would thereby remain incognita.”

#4. “He was ready, perhaps, to shed a little of the armor he wore around his heart, that upon returning to civilization, he intended to abandon the life of a solitary vagabond, stop running so hard from intimacy, and become a member of the human community.”

#5. “Unlike Muir and Thoreau, McCandless went into the wilderness not primarily to ponder nature or the world at large but, rather, to explore the inner country of his own soul.”

#7. “At long last, he was unencumbered, emancipated from the stifling world of his parents and peers, a world of abstraction and security and material excess, a world in which he felt grievously cut off from the raw throb of existence.”

#9. “And my emotions were similarly amplified: The highs were higher; the periods of despair were deeper and darker. To a self-possessed young man inebriated with the unfolding drama of his own life, all of this held enormous appeal.”

#10. “I was dimly aware that I might be getting in over my head. But that only added to the scheme’s appeal. That it wouldn’t be easy was the whole point.”

#11. “At that stage of my youth, death remained as abstract a concept as non-Euclidean geometry or marriage. I didn’t yet appreciate its terrible finality or the havoc it could wreak on those who’d entrusted the deceased with their hearts. I was stirred by the dark mystery of mortality. I couldn’t resist stealing up to the edge of doom and peering over the brink. … In my case – and, I believe, in the case of Chris McCandless – that was a very different thing from wanting to die.”

#12. “As a youth, I am told, I was willful, self-absorbed, intermittently reckless, moody. I disappointed my father in the usual ways. Like McCandless, figures of male authority aroused me in a confusing medley of corked fury and hunger to please. If something captured my undisciplined imagination, I pursued it with a zeal bordering on obsession, and from the age of seventeen until my late twenties that something was mountain climbing.”

#13. “It is easy, when you are young, to believe that what you desire is no less than what you deserve, to assume that if you want something badly enough, it is your God-given right to have it.”

#14. “I was a raw youth who mistook passion for insight and acted according to an obscure, gap-ridden logic.”

#15. “Danger has always held a certain allure. That, in large part, is why so many teenagers drive too fast and drink too much and take too many drugs, why it has always been so easy for nations to recruit young men to go to war.”

Iconic Into The Wild Quotes

#17. “It is the experiences, the memories, the great triumphant joy of living to the fullest extent in which real meaning is found. God it’s great to be alive! Thank you. Thank you.”

#18. “The trip was to be an odyssey in the fullest sense of the word, an epic journey that would change everything.”

#19. “And so it turned out that only a life similar to the life of those around us, merging with it without a ripple, is genuine life, and that an unshared happiness is not happiness. . . . And this was most vexing of all,” he noted, “HAPPINESS ONLY REAL WHEN SHARED.”

#20. “Two years he walks the earth. No phone, no pool, no pets, no cigarettes. Ultimate freedom. An extremist. An aesthetic voyager whose home is the road. Escaped from Atlanta. Thou shalt not return, ’cause “the West is the best.” And now after two rambling years comes the final and greatest adventure. . . . No longer to be poisoned by civilization he flees, and walks alone upon the land to become lost in the wild.”

A good book stays with us forever. This one really spoke to me. It made me ponder on the fleeting nature of life, and how easy it is for a modern man to get lost in a sea of responsibilities and outside expectations — to an extent that he loses his freedom.

I hope that my collection of the most resonant Into the Wild quotes will inspire you and remind you not to forget to live.