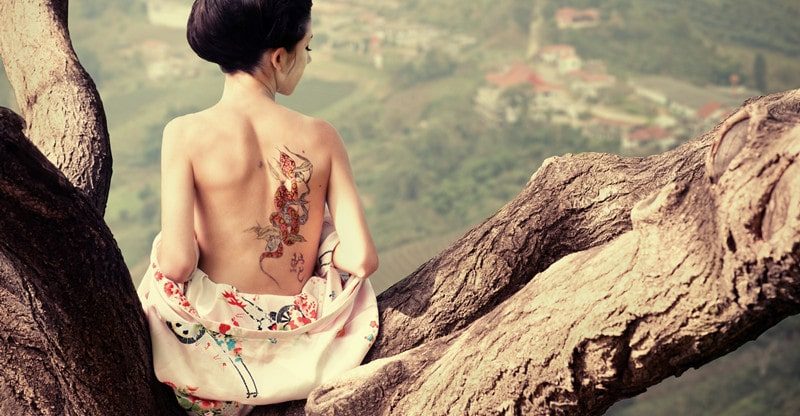 Having a Japanese tattoo portrays the mystery surrounding traditional yet rich Japanese culture. Little is known about the symbolism and origin of these unique displays of art typically seen today.

If you are looking to get a particular tattoo, then read on to discover more about Japanese tattoo motifs. Let’s look at the origin of tattoos and motifs in Japan, their symbolism, and their impact on today’s world.

In Japan, tattoos go back thousands of years to the Jomon period, when historians found markings on old clay items. The Chinese claim that Japanese male criminals had tattoo markings on their bodies and faces.

This led to a ban on tattoos towards the end of the 1800s. However, the region had an increased crime rate, and the government had to prove to the western world that their country was safe. Therefore all forms of body markings in Japan were forbidden.

As a result, an underground culture among the lower-class communities was born. Getting the illegal art was a painstaking process representing power and courage in those communities. Interestingly, warriors and street fighters wore clothing with symbols for spiritual protection and to show rebellion and bravery.

Later, during the Edo period, a cultural and artistic rebellion brought the re-invention of tattoos and their new symbolism. Wood artists created colourful prints that were the main symbols of the period.

People, after that, began displaying interest in the prints, and the tattoo industry gained popularity.

The wood artists became the first tattoo artists in Japan. Although they initially used the crude equipment they used on wood to mark human bodies, modernisation brought safer tools.

However, one item that has remained popular from that period is Nara ink. The traditional Japanese ink turns into a greenish-blue colour once it comes into contact with skin.

The Symbols in Japanese Tattoos

Although most people expect Japanese tattoos and motifs to be dragons or snakelike creatures, plenty of options are available. Known as Irezumi, the Japanese style of tattoo symbolises spiritual protection and assistance.

Unfortunately, some tattoos in Japan are still associated with gangs such as the Yakuza. This is because they have characteristic markings that identify them from each other in the streets. However, to remain unidentified, modern crime syndicates prefer to remain without these tattoos. Despite this, Japanese tattoos remain famous worldwide due to their powerful symbolism, elaborate detail, and colour.

List Of Unique Japanese Tattoos Motifs And Their Meanings

There are hundreds of unique Japanese tattoo motifs one can use. They include:

The musical theatre scene in Japan is vibrant and colourful. Express your sense of adventure, colour, and drama with a Kabuki tattoo. They include intricate details of costumes and makeup to pay tribute to the men and women of Japanese entertainment.

Maneki Neko is a lucky Japanese cat whose raised paw symbolises wealth, good fortune, and luck. He is a popular figure at the entrance of most Japanese and Chinese restaurants.

Alternatively, you can get Horitomo’s monmon cats’ tattoo. These elaborate designs are intertwined with other symbols to produce a remarkable effect on the mind and skin.

Ryu remains the solid symbol of strength, intelligence, and favour. Dragon tattoos are versatile and can incorporate any object or creature you want.

Since the myth around them states they take any form, you can have a lion as the head of the body. One can choose whichever animal they associate with to come alive in any part of the dragon’s body.

Peonies are the king of flowers and play a significant role in Japanese culture and symbolism. A beautiful motif of a Botan tattoo, as they are known, makes a pretty addition to your collection. Peonies signify honour, love, prosperity, good luck, and fortune.

Japanese stories and legends talk of the cunning yet loving nature of monkeys. These monkey tattoos are known as Saru and were said to be mediators of the people with the gods. Saru tattoos have a mask-life feel for more mystery.

If you want to research more about Japanese tattoo motifs, delve deeper into the myths and legends to discover fascinating stories. The detailed work and symbolism of the Japanese tattoo designs display a type of art that is timeless.