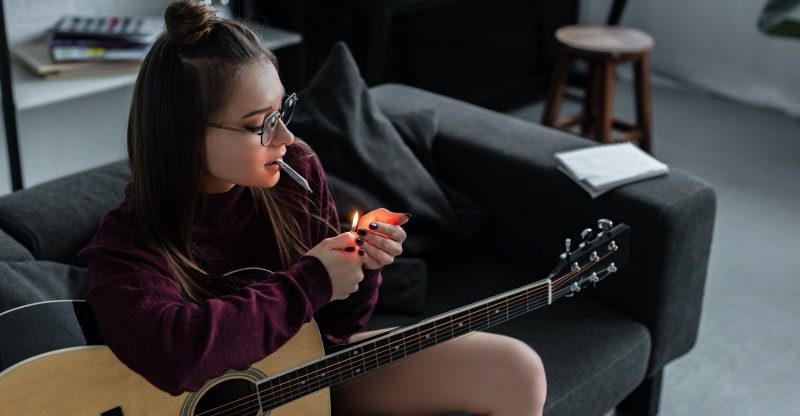 Cannabis use or possession is illegal under the United States federal law for both medical and recreational purposes. It’s classified as a Schedule 1 substance by the Controlled Substances Act of 1970.

However, it’s been legalized in some states and has been giving patients relief from pains, anxiety, and other illnesses. It has also helped the economy on local and national scales, generating billions of dollars in tax revenue. That’s politics, business, and botany interwoven into one seamless fabric.

As a result, the minds of the citizens of the United States have been enlightened regarding this herb and the cannabis culture. Subsequently, this gives a sense of freedom to both medical and recreational users as they get easy access to medical-grade sticky-ickies and guilt-free blazing.

The Puff And The Pass

The best way to administer cannabis for medicinal purposes is by smoking it. It’s the most expedient way to get cannabinoids in your bloodstream. This is also how recreational users enjoy it—with a bong or a pipe, you can easily get a slice of heaven and reveal greater truths within yourself.

The smoke, as you know, can be really funky, especially the strains ‘Cat Piss’ and ‘Super Skunk’ (you can tell by the names). But the st[inkier the dope, the more flavorful the smoke. This also tells you that it has been harvested at its peak, thus, giving you a more out-of-body smoking experience.

Apparently, this pungent stench can make your clothes smell like eau-de-ganja and your house like shiver-me-timbers, especially after an up-in-smoke weekend with your best buds.

But, how do you get rid of the smell?  Now, put the blunt down just for a second as here’s a cannabis smoker’s guide to keep your house smelling good:

Consider smoking low odor weed strains, especially if you want to be lowkey with your habit. The scent of these strains can easily go away and isn’t as funky as the skunky counterparts.

Strains such as Northern Lights, BC Mango, and Durban Poison are some of the low odor strains that you can opt for to make it easier for you to keep your house smelling good, while still delivering massive hits with their high levels of THC.

If all else fails, hold it in and don’t exhale; else, just toke up outside the house.

2. A Lousy Perfume And A Lousy Toupee

Seriously, take a good look at your spot. Does it smell like lousy perfume and look like a lousy toupee?  If so, then get up off the couch and start cleaning that place up.

An overflowing ashtray and a filthy trash can be such a big mess. So, just take out all your trash and let the garbage man finish the job.

Take all those dried-out roaches from your ashtray and put them in the trash can. By the end of the day, throw out the trash from the can, may it be full or not. You don’t want your house smelling like stoner garbage, right?

There may be residue on your ashtray and you need to clean it up, too. You can use alcohol to rub it clean or, else, the odor will just sit there. You must wash and disinfect the trash can, too.

After taking the trash out, walk around a little, then come back home and take a big sniff once you open the door. Now, ask yourself, “Does this place still smell like Woodstock ‘69?”  If it does, then turn yourself into an uptight, self-serving, over-opinionated fellow and arrange all your stuff in the most obsessive-compulsive manner.

Remove all the clutter that the smoke could possibly cling to. Arranging a place in such a manner will not only help get rid of the smell of an ecosystem slowly progressing with a microscopic civilization from leftover take-out that you ordered last week, but will also make your place feel like a sanctuary.

Get all your stuff organized and make sure that your dope is stashed away in an air-tight container, such as a smell-proof bag, a mason jar, or a zip lock locked inside a bigger zip lock. This will not only help preserve the potency of the product but will also keep its scent locked in.

4. Turn The Place Upside Down

Cannabis smoke is hot smoke; therefore, it rises to the air. However, when it cools down, it would settle on your carpet, couch, throw pillows, and other soft décor pieces. Thus, it’s ideal to regularly wash your pillowcases, curtains, blankets, and sheets lying around parts of the house where you smoke.

For the couch and the carpet, consider spreading baking soda over them, and let them rest for about half an hour before you vacuum. The baking soda will absorb the odor and wetness from the carpet and the upholstery, thus, deodorizing them.

5. Pin The Tail On The Donkey

Trying to do things when you’re too baked feels like a game of ‘pin the tail on the donkey.’ But, here are some temporary solutions that you can do to keep your house smelling good despite being couch-locked.

You can light an incense to mask the smell of the smoke. This will not get rid of the smoke, but can add a more chill vibe to your smoking experience.

A diffuser is a device that breaks down essential oils and disperses them into the air. Just like the incense, the diffuser uses aromatherapy to make you feel relaxed, while at the same time cleaning the air.

You can keep an air freshener handy and just spray whenever you feel like you need to, or you can get an automatic air freshener.

An automatic air freshener releases encapsulated scents every 10 minutes or on a set time and preset conditions. You can even set up a lit candle in front of it so it would look like you have a fire-breathing dragon in the room.

When the air around the room circulates properly, there’s less chance for the stench of the reefer to cling to curtains and surfaces. You can direct the fans toward an open window to let the smoke out, or you can install exhaust fans.

Marijuana is nature’s gift to mankind; therefore, anyone should treat it with respect. It has only developed a bad reputation because of the lousy stoners that abuse it.

If you want to change the negative vibe around this plant, you should be the change that you want to see. You can start by being more orderly and disciplined in your smoking habits, especially now that it’s once again recognized as a medication—a medication in the hands of the common man.