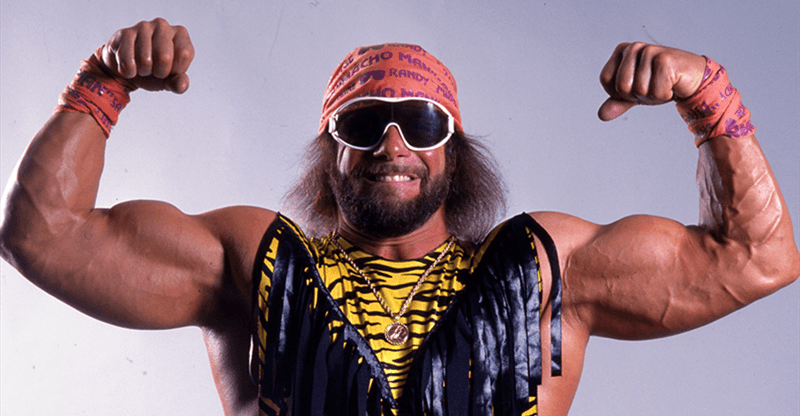 Sometimes I find inspiration in the most peculiar places and people. That’s why my friends often think I’m messing around when I quote Randy “Macho Man” Savage. But the truth is that I’m dead serious and not in the least embarrassed about it. I even made a list of Macho Man quotes that lift me up and make me laugh.

Don’t get me wrong, I’m neither a fan nor a connoisseur of professional wrestling. However, there is something about Randy Savage that I appreciate. Undoubtedly, one has to salute his successes in the ring. But more than that, he has an aura of authenticity, honesty, and passion for life that deserves a shout out.

I won’t go into details about life, although it was an extraordinary journey. What’s more important is the truth that he speaks. Please, read without prejudice!

40 Macho Man Quotes That Prove How Awesome Randy Savage Was

#1. “Every sport has its own cast of characters.”

#3. “Wrestling is a fraternity, and the boys will work their butts off for you as long as you respect them and don’t lie.”

#4. “Hulkamania is like a single grain of sand in the Sahara desert that is Macho Madness.” (about on and off archnemesis Hulk Hogan)

#6. “Yeah what were you doing at Wrestlemania? Ohhhh yeeeeah I’d like to know. You weren’t there to gloat were you? No I guess you weren’t.”

#7. “You will eat my rear rockets and like it! Ohhhh yeahhh!”

#9. “Dusty Rhodes, do you think you’re what our forefathers were thinking about when they thought up the American Dream? Ooooh, yeah, I don’t think so.” (to Dusty Rhodes, before Wrestlemania)

Macho Man on Himself

#10. “From wrestling to my hip-hop thing, I’ve just been able to do so much and meet so many crazy characters.” (on his attempts to become a rapper)

#11. “All I care about is that people are being entertained. It’s not about being the world champion [in wrestling], it’s about exciting the people. If you walk away entertained, then I did my job, and that’s all I care about.”

#13. “Let me tell you now a man of my position can afford to look ridiculous at any time.”

#15. “I’m the Macho Man Randy Savage and I’m the World Wrestling Federation Champion and YOU’RE NOT.”

#18. “The match the whole world, Jupiter, Saturn , Venus… Or anywhere else is waiting for.”

#21. “I say I’m a million percent. That is better than a hundred percent!”

#24. “Elizabeth…Elizabeth…will you marry me?” (proposing to Elizabeth Hullet, live in a ring)

#25. “Thirty-six years ago, Lynn and I met on Lido Beach. I feel so fortunate that I had a second chance to marry my first love, here where it all began.” (on marrying his second wife and childhood sweetheart Barbara Lynn Payne)

#27. “I don’t want my dad to have a heartbeat with no pulse. Let him go.” (standing next to his father’s deathbed)

#28. “Expect the unexpected in the kingdom of madness!”

#31. “Oh yeah? Rules? Well rules were made to be broken. AND YOUR NECK COULD BE BROKEN!”

#33. “What a great way to see all of our legacies live on, through the video games.”

#34. “Just because someone acts a certain way on TV, that doesn’t mean he’s like that in real life.”

#36. “Being a wrestler is like walking on the treadmill of life. You get off it and it just keeps going.”

The Last Quotes of Macho Man

#38. “I have no regrets.” (when asked about wrestling as a career choice)

#40. “I can’t believe how you survived the business and I didn’t. Every inch of me aches.” (to his brother Lanny on the state of his body)

It may seem odd to look for wisdom among pro-wrestlers, but Randy Savage was so much more. He was the king of the ring, a true professional, and an outstanding human being.

People tend to raise their brows when I mention him in a conversation. My answer is often a paraphrase of a great quote from another vivid character — Oscar Wilde. He advised us not to judge the quality of advice by the person giving it.

Life is beautifully unpredictable and we should embrace that. After all, Macho Man quotes prove that he certainly did, and what an astonishing life he led!