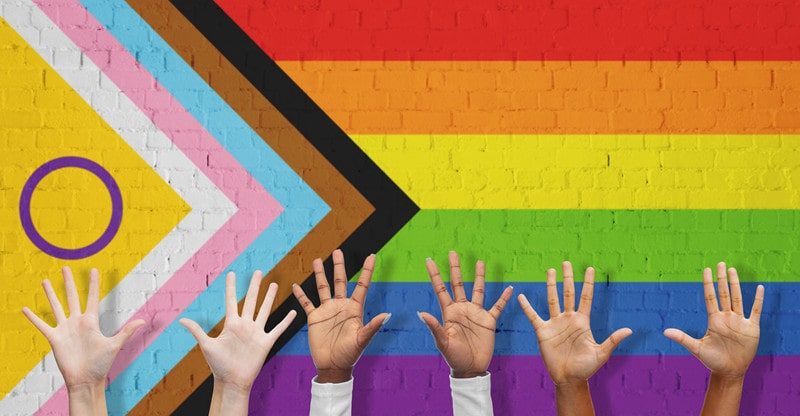 On March 6, the progress pride flag will fly over Australia and it will permanently replace the rainbow flag. This flag will also show on the banners in the streets of George and Williams in the city center.

This progress flag is a representation of the LGBTQIA communities and incorporates several colors. This article will discuss the Progress Pride flag, the origin and the differences between it and the traditional flag.

What does the Progress Pride Flag mean?

This Pride flag is a symbol of the LGBTQIA community and what they represent. The pride in this flag symbolizes gay pride and that anyone in this category should be proud of their sexual identity.

Each color and stripe of this flag is a sign of the sectors of this community. There are many versions of this flash which include asexual, transgender, pansexual, intersex, gender-fluid and bisexual. This color has eight colors: Blue, black, brown, purple, orange, yellow, red and green.

The black color is for diversity, the brown is for inclusion, red means life, orange is healing, yellow means sunlight, green for nature, blue for harmony and purple for spirit.

According to Lord Mayor Clover Moore, this flag shows that everyone is inclusive in Australia and Sydney supports every member of the LGBTQIA communities. The Mardi Gras celebration this year promises to be bigger due to the lifting of covid-19 restrictions.

History of the progress pride flag

The pride flag was made by Gilbert Baker in 1978 after the election of Harvey Milk who was the first transgender to be elected into public office in San Francisco. This flag is a representation of the LGBTQ group and their intention to be included in society.

Though the first flag has about eight colors, it was dropped after Baker said it’s pretty difficult to mass-produce those colors.

Differences between the normal pride flag and the progress pride flag

The recently added colours, pink, and blue represents a call back to the Transsexual flag whole the black and brown are calling for more inclusion of the LGBTQIA black communities.

Moreover, the black color in the new progress pride flag is paying homage to those with HIV and those that have died from the disease.

Not all things have gone off without a hitch with the transition to the new flag. With the Progress variant of the Pride flag only recently being available, stock levels haven’t kept up with Demand.

Asking LGBTQ+ Flags for their comment on the recent shortage, they’ve said their Pride Progress Flag available has had to be back-ordered repeatedly due to significant demand. As manufacturers ramp up supplies however this should ease off with more than enough flags for everyone.

Changing the Pride flags in Australia

In September 2021, Sydney citizens decided they will fly Progress Pride flags instead of the Rainbow flag throughout the city to celebrate and support all the LGBTQIA communities around.

This was done after the Mardi gras organizers in the country changed from the normal pride flag to the progress flag after positive feedback from most people. Since 2007, Australia, particularly Sydney has always flown rainbow banners and held the Mardi gras event.

The new change means rainbow flags and banners will be recycled and the cost will be pushed to the 2021/2022 budget.