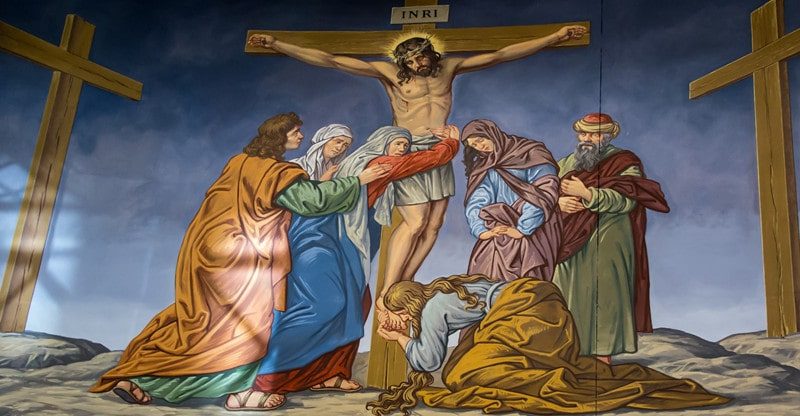 Throughout Western history, one of the main goals of art was to transform the teachings of the Bible into marvellous imagery for everybody to understand and appreciate. However, by itself, the stories of the Bible are very difficult books to comprehend and require much study to be understood.

However, transcending these stories into picture form made it much easier for the masses to understand the Bible’s messages and live by them. When they say a picture tells a thousand words, it is never more accurate than in the case of discerning the Bible.

The crucifixion is one of the most important and powerful stories in the entire Bible. Both the crucifixion and the Crucifix symbol play a large role in the Christian religion. With that being said, most of the meanings behind it, other than the suffering of Jesus Christ on the cross are not fully understood. The following is a look into these meanings and the greatest paintings depicting them.

The Descent from the Cross by Peter Paul Rubens

First and foremost, the crucifixion scene is a symbol of death. It has many other meanings, but fundamentally it is a story about the horrific and unfair death of Jesus Christ. The result of this tragedy is twofold in most Christians’ eyes.

For one, it is a reminder that everyone will face death at some point, yet while still alive, they should try to live like Jesus did, being kind and loving to all. But, on the other hand, the symbol of Jesus on the cross is a stark reminder that each one has the capability within us to commit evil acts of immense cruelty and should strive against this aspect of ourselves at all costs.

Flemish Baroque painter Peter Paul Rubens captures these aspects of the crucifixion perfectly in his Christ on the cross painting. It is beautifully realistic and harrowing at the same time. Rubens painted many paintings of the Crucifixion. Some of his other best ones are Christ on the Cross and The Elevation of the Cross.

The second and perhaps most important meaning behind the crucifixion scene is the idea of forgiveness. Despite all the suffering endured by Jesus Christ both leading up to the Crucifixion and the Crucifixion itself, which is one of the most brutal ways to kill a person in all of history, Jesus still forgave the people and even took responsibility for their sins so that God may forgive them.

For those not familiar with the Crucifixion story, let’s do a brief summary. First, Jesus is betrayed by a close friend. Then, he was falsely imprisoned and tortured, publicly shamed, and sentenced to death despite being completely innocent, tortured, mocked, and publicly humiliated again, before eventually having his hands and feet nailed to a large wooden cross and strung from it for days until his eventual death.

And despite all this, Jesus still forgave his persecutors. Talk about a potent symbol. Like Rubens, Spanish Baroque painter Diego Velasquez is also known for his marvellous bible paintings, including Christ on the Cross. His image of Jesus on the Cross is one of the most famous and best.

The Crucifixion of Saint Peter by Michelangelo

St. Peter was one of the apostles of Jesus Christ and was crucified for the same reason Jesus was, Heresy. The meaning behind the Crucifixion of St. Peter is the idea of Martyrdom. In basic terms, a Martyr is someone who is unwilling to give up their beliefs and is made an example by being put to death.

Many famous artists have painted St. Peter’s crucifixion, including the great Italian Renaissance artist Michelangelo. Michelangelo’s St. Peter looks defiant as he is being crucified upside-down believe it or not. But, like Jesus, St. Peter was willing to die for his beliefs. This is a meaning of the crucifixion that everyone can understand.

Christ of St. John on the Cross by Salvador Dali

Paintings of Jesus on the cross and other Crucifixion art were at the height of their popularity during the 15th to 17th centuries. As the years went by, the image became less and less prolific in painting as art moved toward the direction of conveying emotion over meaning.

However, Spanish Surrealist artist Salvador Dali was not like other artists and brought the image back in one of his most famous paintings of the latter half of his career. In Dali’s cross painting, though, there is a definite modern edge, as the image of Jesus on the cross is painted three-dimensionally.

Both Christ and the cross float freely in the sky over a large body of water. Beneath that stands St. John, the Virgin Mary, as per the Gospel of John. This crucifixion painting is meant to represent the idea of rising above the sins of the world and all its temptations, just like Jesus did. This is yet another meaning of the Christ on the cross image, albeit a lesser known or explored one.

For a time, crucifixion paintings were one of the most reproduced images in all art. Its powerfully impactful image and deep philosophical meaning were the staples of European society for centuries. The historical crucifixion paintings discussed here and the meanings behind them are but a few examples of the deep artistic reservoir that is crucifixion art.