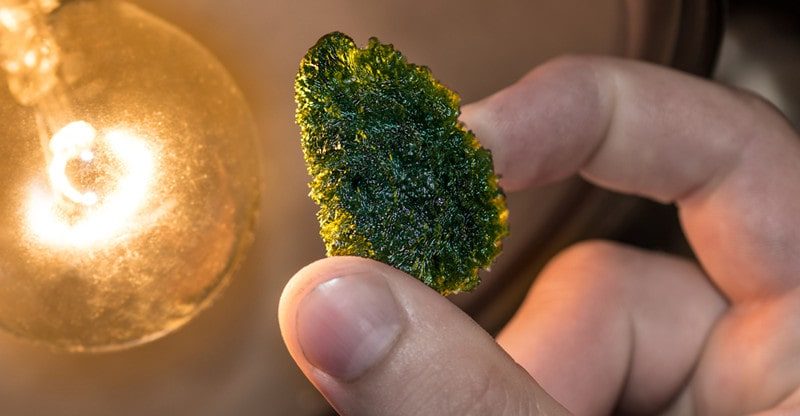 Tektites are members of a large group of impact glasses, formed by the collision of a meteorite on the Earth’s surface and the subsequent melting of surrounding rocks. The most famous tektites used as gemstones are moldavites from southern Bohemia in the Czech Republic. These were formed by a meteorite’s impact in the Ries crater in southern Germany 14.7 million years ago, about 500 km from their occurrence (V. Bouška, Moldavites: The Czech Tektites, Stylizacje, Prague, 1994).

Moldavite is recognizable by its aesthetic green color which looks heavenly temperate, at the same time the green color of moldavite is as deep and soulful as the ocean.

What Are The Physical Properties Of Moldavite?

Moldavite is highly valuable for its metaphysical and spiritual properties. There are many different shades of green present in a single piece of moldavite. This is because the composition of Moldavite is a silica-rich glass that is simultaneously transparent and translucent depending on the thickness or shape of the Moldavite. The chemical formula for the stone is SiO2(+Al2O3) and it has a hardness of 5 to 5.5 on the Mohs scale.

As described earlier, Moldavite is a form of Tektite which comes from the base Greek word “tektos” which translates to “molten” or “melted”. One theory is that the impact of the meteorite was so great that it caused an enormous amount of dispersion of heat and energy that caused the sand to turn into Moldavite, this is why Moldavite appears to look like glass in some ways.

Glass is made from silicon dioxide (SiO2) which is liquid sand but regular sand turns into glass at a temperature of 1700°C (3090°F). Authentic Moldavite is only found at the location of the Czech Republic, which makes it even more likely that Moldavite formed due to a meteor crash, because these temperatures are very hard to achieve naturally or outside of a controlled environment.

The MetaPhysical Charms Of Moldavite

Owners of Moldavite believe that Moldavite contains celestial energies from outside of the Earth’s environment because Moldavite was created due to the impact of a meteor. They believe that it gives the owner beneficial and wholesome Earth energy.

Since the creation of Earth is the foundation of everything else that is created on it, nothing can survive without a powerful Earth connection. A solid Earth connection bestows the owner wholesomeness and unimpaired health and the capacity to remain grounded in spite of all of the afflictions and adversity in their life.

The root chakra of all people corresponds to their Earth energy according to the Hindu Chakra System. Earth energy conveys balance, stability, honesty, and patience, just like the Earth provides all of these characteristics to all of the other creations within it, the seas, forests, mountains, and deserts.

The wearer will be able to establish a stronger Earth connection the longer a person wears Moldavite jewelry or crystals. The wearer’s Crown Chakra or the Third Eye will begin to become more powerful as time passes.

The Third Eye Chakra is situated between your eyebrows also known as the body’s center of consciousness, command, and perception. A powerful connection with the Third Eye Chakra helps a person remain levelheaded and calm even when things are not going their way. There is no doubt that Moldavite has a spiritual impact on a person and every person may feel a unique influence of the crystal.