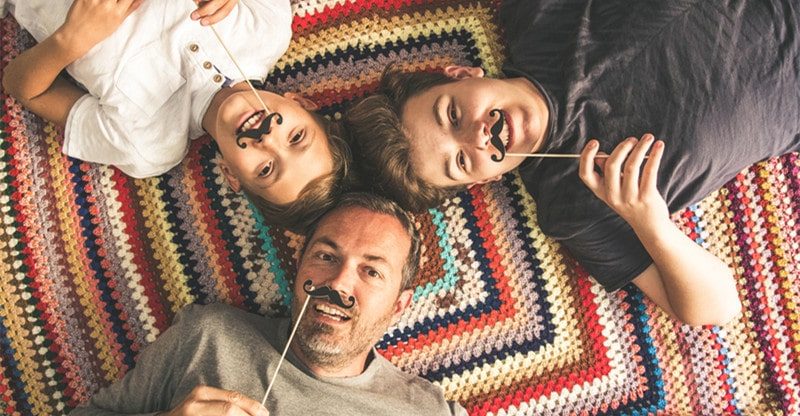 Movember began as a plan dreamt up by friends in a pub in Melbourne, Australia, back in 2003, to raise awareness about men’s health; it’s now grown into an annual worldwide event that boasts six million supporters, and that has raised vast sums of cash that have funded a plethora of projects, initiatives, and research.

The campaign focuses on the growing and sporting of mustaches to help raise awareness about a range of men’s health issues, specifically, mental health, prostate, and testicular cancer.

Below are a few of the reasons behind its phenomenal success.

Although the causes that it supports are serious, the focus of the Movember campaign is a fun one: growing some spectacular (or not!) facial hair and then showing off your efforts is always going to generate some comedy!

Men are encouraged to post their new ‘taches online, and many workplaces are also getting in on the fun, awarding prizes for the best (and worst) facial fur. The whole feeling of the campaign is one that is keen not to take itself seriously, which has been key to its ongoing success.

Since the early days of the initiative, social media has been vital in getting people engaged and retaining their attention. ‘Mo Space’ is an online platform for men to show off the ‘taches they’ve grown and to mobilize their family and friends to donate. There’s a mobile app, too, that offers further opportunities to raise awareness and drive up donations.

The folk behind Movember have also proved masterful at the creation of viral videos, which have been extremely powerful tools in terms of keeping the campaign in the spotlight, and fresh over the years. Get more information here on how to incorporate the use of social media into your organization’s Movember campaign and for tips on how to reach a wider audience and create effective calls for action to drive up engagement and raise funds.

The impact of the use of social media has been almighty for Movember, with millions of conversions to donations achieved and an ever-increasing number of conversations around the issues being seen on social media platforms. This has translated into more men than ever before making doctors’ appointments to get checked out, as well as seeking support for mental health issues.

One of the key reasons that Movember has been so effective as a health awareness campaign is because, although the action is centered on November, the build-up starts well before this, helping to keep the initiative in the public eye for a much longer period than a single month.

October sees a huge spike in the mention of Movember across all social media channels, with participants beginning to talk about their ‘tache growing plans and campaign organizers raising awareness of upcoming events. And with influencers and social media stars getting on board and spreading the word, too, the campaign has a greater reach than ever before.

The concept of Mo Sistas is symbolic of how the Movember campaign is constantly evolving, year on year, to generate more support and raise awareness. The Mo Sistas developed as a way for women to support the cause and in the conversation, by supporting their mo-growing friends or by helping to raise funds and awareness.

For many of the Mo Sisters, this is a really special way to honor and remember male loved ones who have been lost to the health issues specifically affecting men that Movember is concerned with tackling.

As a campaign, Movember has been really effective at partnering with other organizations to help promote its aims and spread the word. A great example of this is the 2019 partnership with Distinguished Gentleman’s Ride (DGR), which is an organization that brings together over one hundred thousand motorcyclists across one hundred and one countries in global events designed to boost awareness and start conversations about issues surrounding men’s health.

Movember got on board in 2019 to support and fund the DGR’s initiatives, helping to create a powerful support network for its participants and those interested in the event, which is an opportunity for riders to raise awareness as well as ride in honor of a loved one lost to a men’s health issue.

And What It All Means

What continues to fuel Movember’s might as a health awareness campaign is the very real results that it delivers and the direct impact it has had on lives. In 2018 the campaign raised over £57 million through fundraising initiatives across twenty-one countries.

Millions have accessed the health awareness programs worldwide that this money has funded, and millions of pounds have gone towards medical research into, for example, testicular cancer support. The organization’s community-led mental health projects have saved thousands of lives and have funded the development of more than a hundred new diagnostic tests for prostate cancer.

With the campaign reaching more people, year on year, than ever before, it’s clear that the work of Movember, and its supporters, will be benefiting communities and individuals for years to come.