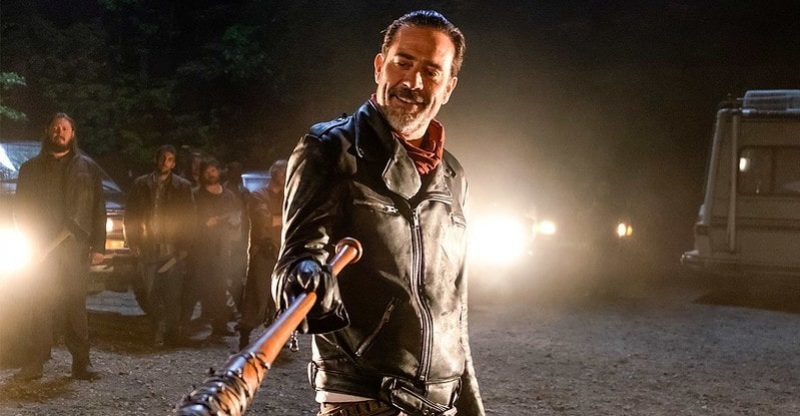 Love him or hate him — Negan quotes in The Walking Dead are arguably the best part of the whole show. He’s ruthless and brutally honest no matter what, and that’s something we can all respect. Also, whenever he appears in a scene, he’s got us all sitting on the edge of our seats, anticipating what will come out of his mouth next.

Negan’s speeches about leadership, love, and hate are incredibly wise, and his one-liners are iconic. So if you want to laugh and learn a thing or two about life, sit back and enjoy these awesome Negan quotes in The Walking Dead.

#1. “Lucille’s beautiful, smooth surface is never gonna look the same, so why should yours?!”

#7. “I just popped your skull so hard your eyeball popped out, and that sh*t is gross.”

#9. “I was gonna ask her to come back with me. Oh, I know what you’re thinking: ‘How could I ever shop a guy who just bashed her husband’s head in.’ You’d be surprised.”

#13. “Slim pickin’s in here. And I can’t be the only one to notice that you got a fat lady in charge of keeping track of rations, can I?”

#14. “Is that you, Rick? Underneath all that man bush? Sh*t, I would not have messed with that guy.”

#16. “You got some beach-ball-sized lady nuts coming in kamikaze like that.”

#17. “Hi. You’re Rick, right? I’m Negan. And I do not appreciate you killing my men. Also, when I sent my people to kill your people for killing my people, you killed more of my people. Not cool. Not cool. You have no idea how not cool that sh*t is. But I think you’re gonna be up to speed shortly. Yeah. You are so gonna regret crossing me in a few minutes.”

#18. “I’ve got my fingers crossed for a little freaky deeky.”

#19. “Holy crap, you are creepy as sh*t sneaking up on me wearing that collar with that freaky *ss smile.”

#20. “I took this place, and it was a damn free-for-all… A loose confederation of assholes, an army made up of gangs of animals, and I brought it all together. The last guy that was in charge; he wasn’t in charge of sh*t. He allowed people to be weak. I don’t. I make them strong, which makes this world strong. You’re gonna see, Gabey. See, I’m gonna make you my new special project. Gonna make you nice and strong too. We’re gonna find your special purpose. Hell, yes, we are.”

#21. “A good leader uses everything to their advantage.”

Negan Quotes About Being a Leader

#22. “People are a resource. Money on the table. People are the foundation of what we are building here!”

#23. “If you don’t have something interesting for us… somebody’s gonna die. And no more magic guns.”

#24. “I care about my people. I don’t want to just march them into the line of fire because I want to play ‘my dick is bigger than yours.’ It is. We both know it.”

#25. “I like killing people. Oh. Well, I… I say it’s about killing the right people. So you kill the right people at the right time… everything falls into place. Everybody’s happy. Well, some people more than others. But you kill one, and you could be saving hundreds more. And that is what we are all about. We save people.”

#26. “Punishment — can’t do anything without that. Punishment is how we built everything we have.”

#27. “You don’t really think that you were gonna get through this without being punished, now, did you? I don’t want to kill you, people. Just want to make that clear from the get-go. I want you to work for me. You can’t do that if you’re dead, now, can you?”

#29. “You ever hear the one about the stupid little prick named Rick who thought he knew sh*t but didn’t know sh*t and got everyone he cared about killed?”

#30. “If you don’t protect what belongs to you, then sooner or later, it belongs to someone else.”

#36. “You see that? I am everywhere. And this was your shot to prove to me that that fundamental fact was sinking in, and you failed. Which sucks, because your life was about to get so much cooler.”

Negan is incredibly quotable, and he makes all of us laugh, almost against our own will. Even though we’ve only met him in the Season 6 finale and don’t exactly want to love and quote him, we do.

His language isn’t suitable for all, but if your friends are fans of the show, these Negan quotes in The Walking Dead will make them burst into tears.