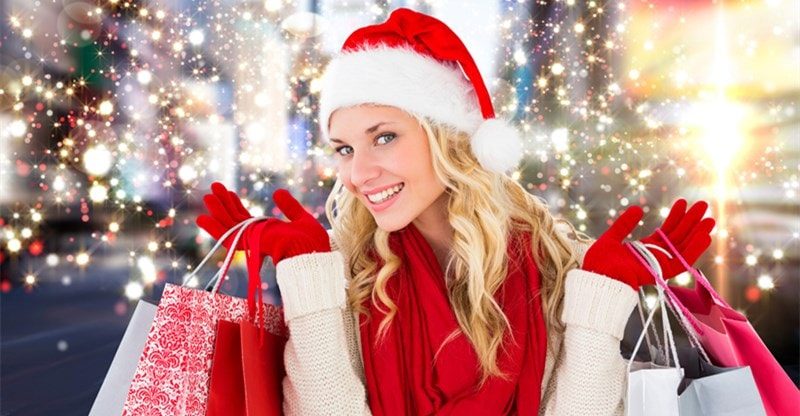 A trip to New York City is magical at any time of year, but there’s something truly uncanny about the city during the holidays. From getting dressed up and going to a show like The Music Man on Broadway, to festive window shopping there’s so much to do and see in New York at Christmas.

Here, we’re sharing the best things to do in New York at Christmas, from iconic Christmas shows to places to eat and drink. No Scrooges allowed!

If you’re planning to see a show while you’re in New York at Christmas, make it the “Radio City Christmas Spectacular.” It features the Radio City Rockettes, the precision, chorus-line dance company formed in 1925 and New York City icons. Their performance will blow you away.

Not only will you get a chance to experience the world-famous Radio City Music Hall, but you’ll see impressive kicklines, professional ice skaters, and hundreds of Santas grace the stage. It’s a Christmas memory you’ll never forget.

While the “Radio City Christmas Spectacular” is a Christmas show like no other, you might prefer a night at the ballet. The New York City Ballet is one of the world’s premier ballet companies and their rendition of the Christmas classic “The Nutcracker” is sure to get you into the Christmas spirit.

Performed at the iconic Lincoln Center, you’ll be impressed by the power and grace of the dancers with a world-class orchestra in the pit. It’s the perfect blend of tradition, sophistication, and classic New York at Christmas.

Christmas Markets are popular in European cities, but New York – being as worldly as any city can be – has caught on with these festive holiday markets popping up all around town.

Check out the massive Christmas Markets in Grand Central Station, Columbus Circle, at Union Square, and in Bryant Park. Grab special keepsakes, Christmas ornaments to remember your trip, and festive food and drinks to keep you warm. If you collect more treasures than you expected at the markets, find a luggage storage service nearby and drop your bags off while you finish making the rounds.

While you’ve probably seen the famous ice skating rinks at Rockefeller Center or in Central Park in your favorite Christmas movies and on TV, the best place to go ice skating in New York at Christmas is in Bryant Park.

Alongside their gorgeous Christmas Markets is a less-crowded (and less-expensive) ice skating rink where you can get the true Christmas in the city experience. Whether you’re on a romantic getaway with your spouse or you’re enjoying the holidays with kids, ice skating at Bryant Park is a must.

The Christmas Tree at Rockefeller Center

Even though you might skip the ice skating to avoid long lines and hefty prices, seeing the Christmas Tree at Rockefeller Center is a special experience that will inspire the magic of Christmas into anyone who sees it.

Standing up to 100 feet tall, this Norwegian Spruce is a real Christmas tree of epic proportions. Head to Rockefeller early in the morning to avoid the crowds or walk by late at night to see it all lit up in glorious multicolor. It’s a sight you can’t miss when in New York for Christmas.

If you time things right, just after checking out the Rockefeller Christmas Tree, turn around to see the Saks Fifth Avenue Light Show. This elite New York City shopping district goes all out with their window displays, but Saks goes the extra mile with a full light-up extravaganza.

The light show plays at regular intervals once the sun goes down alongside dramatic Christmas music. Even the Grinchiest member of your family will start to feel the Christmas spirit at Saks.

Fifth Avenue is synonymous with world-class shopping and during the holidays, the window displays from the street are a Christmas tradition in New York. Make sure to take a peek at the window of Bergdorf Goodman and you might even make a detour to see the window at Bloomingdale’s on Lexington.

No matter where you start from the Upper East Side down to midtown along Central Park, you’ll see window displays in their holiday best. If you’ve got kids in tow, they’ll love the interactive experience where they can push buttons, pull levers, and get even more excited for Christmas morning.

Tavern on the Green in Central Park

Make a reservation at Tavern on the Green in Central Park to really get into the Christmas spirit. This cozy restaurant and bar should be at the top of your to-do list when visiting New York at Christmas. From their seasonal menu to the holiday decor, it’s a lavish dining experience that’s taken to a new level in December.

The New York Botanical Gardens are located in the Bronx. During the Christmas season, the gardens produce a Holiday Train Show, another holiday tradition you won’t want to miss in the city.

The train show travels through a track that’s a half-mile long, featuring over 150 miniature New York landmarks. Especially if you’re visiting New York at Christmas with kids, the bright lights and tiny Empire State Building is enough to excite anyone’s imagination at the holidays.

In addition to the Holiday Train Show, the New York Botanical Gardens also puts on festive performances including acapella groups, concerts, and poetry readings to keep you entertained.

There’s so much happening in New York at Christmas that you’ll likely stumble upon countless festivities by accident. This city really knows how to celebrate and in the Big Apple, the Christmas season is truly magical.