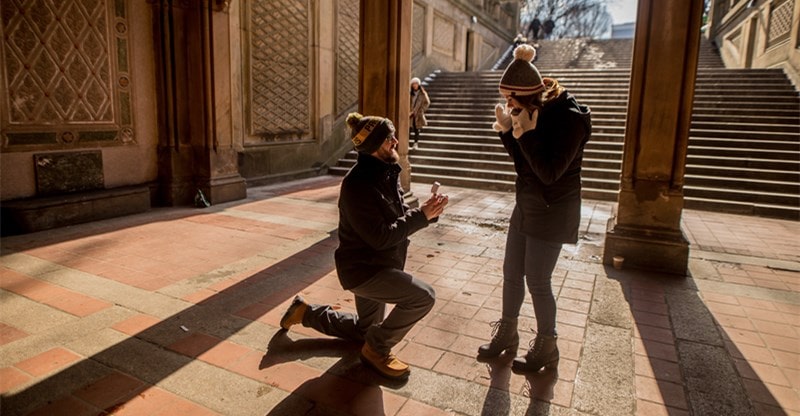 A proposal can be a magical memory. A lot of couples like to tell their proposal story, first to friends and family and later maybe to future generations. Not all proposals are a big deal, and some can be very casual, but if you’re planning to propose to your partner, there are some things that you should avoid doing.

A proposal should be something to remember positively, so you should be careful of any mistakes that might make the occasion less than pleasant to remember. Take a look at the following things that you should avoid when you’re planning a proposal.

There can be a time and place for a public proposal. Some people love the thought of them and even enjoy watching other people propose in public. However, there are also plenty of people who hate the idea of so much attention.

If your partner is shy or is the type of person who wouldn’t want a lot of fuss, a public proposal is unlikely to be the best idea. The best thing to do is to find out what they think of public proposals. If you’re not sure, it’s always better to go with a private and intimate proposal instead.

Buy a Ring Without Careful Thought

When you’re planning to propose with a ring, you need to be careful before you make a choice. You might decide to use a family heirloom, or you might jump straight to looking at diamond engagement rings.

If you’re going ring shopping, you should have a good idea of what your partner will like. You might ask them directly, or you could approach friends or family members for their opinions. Some people prefer to wait until after the proposal so that you can go shopping for rings together instead.

Pop the Question on the Wrong Special Occasion

Some special occasions can be good times for proposals. However, these are events related to your relationship or your partner. For example, you might propose on your anniversary or their birthday.

There are also events that are not really appropriate for proposals, mostly because they take the attention off something else. Proposing on holidays or at events such as weddings, baby showers or other special occasions is probably not the best idea. Pick a time when the attention can be on you and no one else.

Ask Without Discussing It First

Proposals are fun when they’re a surprise, but the answer that you receive shouldn’t be one.

Before proposing, you should know your partner’s thoughts on marriage, if they want it and when they want it. Ideally, you have also discussed other important issues, such as whether you want children and how to raise them, how to manage your finances and your expectations for the future. Marriage isn’t something that you should enter into lightly.

When you’re planning a proposal, put some careful thought into it to ensure it becomes a memory that you both treasure.