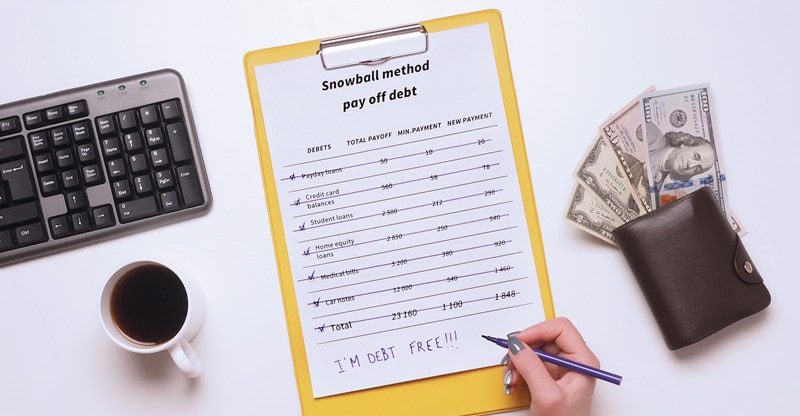 Paying down debt with a strategy is a sound financial decision. There are several methodologies for doing this, including the debt snowball and debt avalanche. Is one somehow better than the other? It depends on your personal situation. For those with excessive high-interest credit card debt, there is a significant difference between the two.

Before we dive in, it’s important to note that you could simply apply for a debt consolidation loan and avoid having to pick either debt payoff plan. If that’s not an option, review debt snowball first. It’s the simplest method, but it has some limitations. The method focuses on paying the smallest balance first, regardless of interest rates. Can you see where that might be a problem?

The Flaws of the Debt Snowball Method

Add up all your debt. The total you arrive at will grow with each passing day. Accounts with higher interest rates grow faster than others. If you leave them for last, that interest will continue to accrue, slowing down your payoff strategy. In a perfect world, where all interest rates are equal, it doesn’t matter. In the real world, though, it makes a difference.

View this scenario in terms of the debt snowball method: Let’s assume that your largest balances are also the accounts that have the highest interest rate. You’ll feel instant gratification when you pay off small accounts, but those other balances will continue to grow at a rapid clip. You’ll make minimum payments on them while working on your debt snowball, but that won’t cover much of the principal.

Now visualize arriving at a high-interest debt in the payoff plan. It will take you longer to pay because the interest rate is still being charged for what will likely be almost the entire balance you started with. Had you paid it off early, you wouldn’t be in that position. This is one of the key flaws in the debt snowball method, and why if you have lots of high-interest debt, you should avoid it.

A debt avalanche works differently than a debt snowball. Rather than prioritizing smaller balances first, it focuses on the accounts with the highest interest rates. That debt is where you put your additional payments. By doing this early in the debt payoff process, you eliminate the accounts that grow the fastest and decrease the amount of time it will take to complete the entire plan.

We could show you some mathematical examples here, but it’s better to understand these two concepts conceptually. Simplified, debt avalanche is faster and will ultimately save you money. Debt snowball provides instant gratification and small wins early on, yet you’ll still need to deal with that high-interest debt at some point. Why not tackle it from the start?

Viewed another way, your objective is to become debt-free, so just choosing a debt payoff method is a big step. If you feel you need a sense of accomplishment in that area early, go with the debt snowball method.

Those with a more long-term outlook on their finances should go with the debt avalanche method. Or, you could just apply for a debt consolidation loan and begin making payments on all of your debts at once. It’s much simpler.