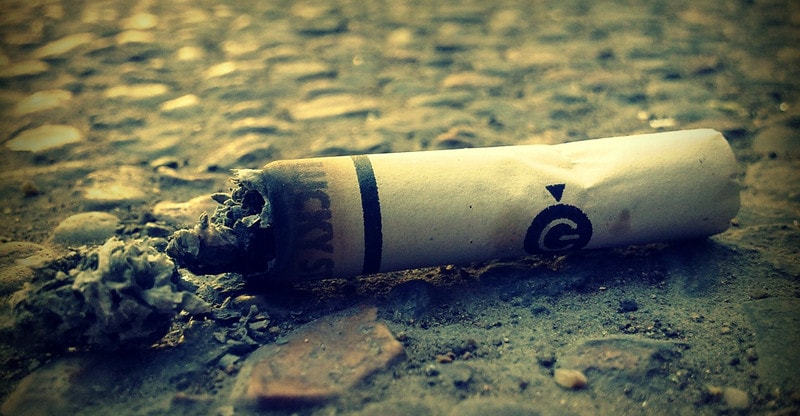 If you’re old enough, you might remember a time in which seemingly all adults smoked. You remember seeing discarded cigarette butts everywhere – crumpled on sidewalks, tossed from car windows, discarded on beaches.

It’s a good thing that many smokers these days are far more conscious about what they’re doing and dispose of their butts in a more mindful manner – but that doesn’t mean the problem no longer exists. Less of those cigarette butts are polluting our sidewalks and streets these days, but they’re not gone; they’re in landfills.

According to National Geographic, we pollute our planet with around 6.5 trillion cigarette butts per year. It’s a massive amount of plastic waste, and vaping was supposed to change that by reducing the amount of waste generated from nicotine use. It hasn’t worked out that way, though, and the biggest reason for that is the popularity of single-use pod-based vaping systems.

What Is a Pod-Based Vaping Device?

A pod-based vaping device uses a hollow plastic pod to store its nicotine liquid. Pod-based devices are popular for many reasons, and convenience is one of the biggest reasons. When a pod is empty, you simply pull it out of the vaping device, discard it and start using a new pod.

The problem with pod systems is that most people discard their pods by tossing them in the household trash. The average person who vapes uses one nicotine pod per day. That’s not a lot of waste for one person – and it certainly pales in comparison to the waste generated from smoking a pack of cigarettes – but it’s a significant amount of waste when you consider the fact that every other pod system user also throws an empty pod away every day.

The most successful maker of single-use pod systems tallies its sales in the billions of dollars each year – and at an average cost of $4.00 per pod, that’s a lot of pods. Each year, potentially hundreds of millions of discarded e-cigarette pods end up in landfills – and just like the cigarette butts of old, many of those pods also end up as litter on streets, sidewalks, parking lots and beaches.

An e-cigarette pod in a landfill pollutes the environment with plastic, metal and nicotine. When the pollution in question amounts to potentially hundreds of millions of pods per year, it’s a significant amount.

Many people also discard their used vaping devices in household trash. Vaping devices include circuit boards and lithium-ion batteries, and they pollute the environment with heavy metals.

Are There Any Options for Recycling E-Cigarette Pods?

E-cigarette pods are actually fairly difficult to recycle, and many recycling facilities aren’t entirely sure what to do with them. That’s because a vape pod is made from multiple materials – plastic, metal and silica, to name a few – so you can’t just drop a used pod in the recycling bin.

An additional issue is that a used pod will always have some nicotine residue, thus making it hazardous waste.

E-cigarette manufacturers generally suggest that you contact your local recycling facilities to ask if any of them accept used vape pods. If you do find a facility that will take them, you’ll need to pry the pods open and rinse out the nicotine residue before turning the pods in for recycling.

Although this article focuses on the environmental impact of disposable e-cigarette pods, it’s important to remember that it’s equally unacceptable to discard the battery unit of your e-cigarette in your household trash. On the bright side, you shouldn’t have too much trouble finding a facility willing to take your e-cigarette if you look for recycling facilities capable of handling e-waste.

How to Minimize the Environmental Impact of Vaping

Aside from single-use disposable e-cigarettes, pod-based e-cigarettes with disposable pods are perhaps the worst types of e-cigarettes in terms of their impact on the environment. The vapers of the world are already filling their local landfills with hundreds of millions of used e-cigarette pods per year, and that issue will only become a greater concern as more people around the world ditch tobacco cigarettes for e-cigarettes.

The bad news is that vaping and having no impact whatsoever on the environment is almost impossible. The good news, however, is that there are several steps you can take to keep your environmental impact at an absolute minimum.

• If you must use a vaping device with pre-filled pods – and you’re unable to find an option for recycling the pods – consider reusing your pods several times before discarding them. If you refill a pod three times before throwing it away, for example, you’ll discard your pods after four total uses. In the process, you’ll reduce your waste by 75 percent.

• If you use an e-cigarette with disposable components, ask the device’s manufacturer to start a recycling program. Be persistent. As much as e-cigarette manufacturers might prefer to push the responsibility of proper product disposal on consumers, it really is up to them to figure out what they’re going to do about all of the plastic waste they’ve created.

• Buy a vaping device with a refillable tank from a vape shop like V2 Cigs to minimize your environmental impact. A vaping device with replaceable coils creates far less waste than a pod-based e-cigarette because you can potentially use a coil for weeks before discarding it. In addition, vape coils are made from metal and cotton rather than plastic.

• If you use a refillable vaping device, you’ll buy bottled e-liquid rather than pre-filled pods. Plastic and glass e-liquid bottles are both recyclable. Rinse your bottles before recycling them.

• Remember that you should never dispose of a device with a battery in the household trash because batteries contain heavy metals that cause environmental pollution. Consider buying a vaping device that uses removable batteries. That way, when a battery stops holding a charge, you can simply drop the battery off at a facility that accepts used batteries. Vaping devices with removable batteries also generally last longer than devices with built-in batteries, reducing the amount of e-waste that you’ll generate if you have trouble finding a recycling facility that will accept your old vaping devices.