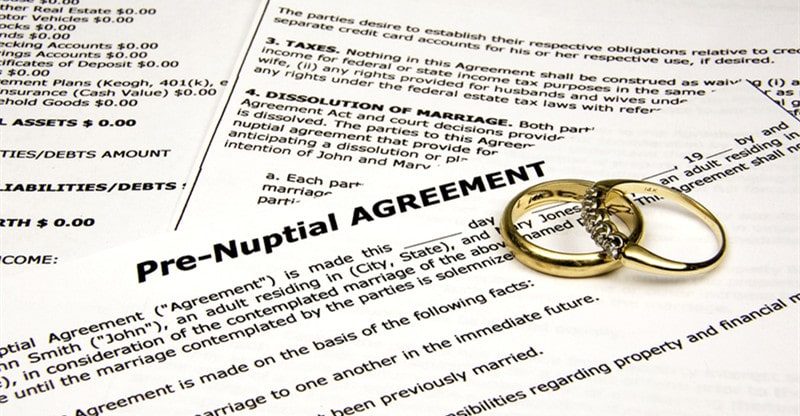 When you’re getting married, you may be bringing in personal or even business assets into the relationship. It can be exciting and there’s nothing wrong with living in the moment.

Sometimes, when one person in the relationship wishes to bring up a prenup, it can sometimes lead to conflict. This needs to change.

People get personally offended and assume it’s an attack on trust. This is far from the case. Prenups are a perfectly normal thing in modern marriages, it should be considered as a document purely for protecting both interests. So that if the worst was to happen, both parties will be able to protect what is there’s without it turning into a slinging war.

This may all sound confusing if you don’t know what it actually means. Essentially, a prenup refers to a document that couples sign before marriage.

The document is almost like an inventory list, where assets and property are written down. Once you know what everyone has, then the document will outline how everything should be divided if the relationship was to sadly end in divorce.

It’s for both people in the relationship, not just the individual. It can go further than simple assets and property, it could also include cash or protection from debt accrued before marriage.

There aren’t any rules when it comes to prenups, meaning you can specify whatever you’d like in the prenup.

Knowing If It Works For You

If you’ve never considered prenups before, then you might not think it’s anything that you should be involved with. It’s worth thinking what works for you.

However, if preparing to get married, you should think of all options. There is nothing wrong with trying to sort the details out.

Famously, society considers prenups to be a ‘romance killer’ but that’s far from the truth. It should just be considered in the same limelight as marital documents.

When working with a lawyer to create a prenuptial agreement, you’ll be able to find out from them what your own assets are worth and why it’s worth protecting.

It’s key you get the right representation, Fullenweider Wilhite is a family law firm that specializes in prenuptial agreements. Going for a firm to look after your interests that focus on family law in a prenup is the way to go.

They can brag about being the leading prenup agreement firm in the whole of Houston, so statements like that prove their worth. You’ll be protected.

It’s important for both individuals involved in a prenuptial agreement, that it’s there for the benefit of both people.

You shouldn’t look at it as a way to screw the other person over, or vice versa, the stereotype that’s portrayed in the media and wider-society needs to be removed.

This is why the younger generation is much more likely to sign prenups, as they realize that it’s a normal occurrence these days. So don’t feel disheartened by the suggestion by your partner to look into it, be open to the idea and figure out what’s best for you.