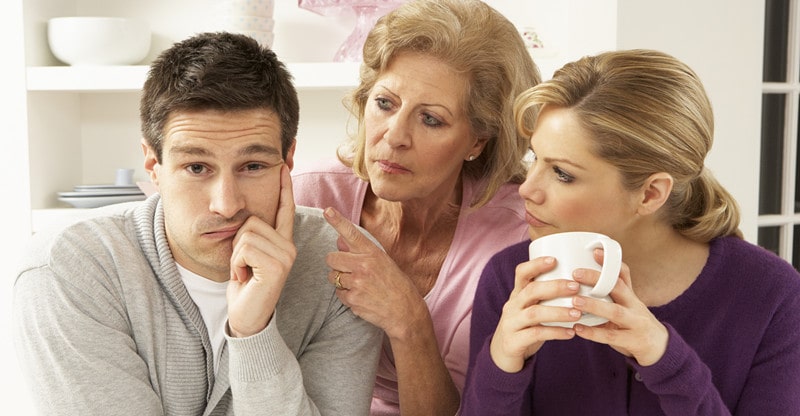 Mothers-in-law — love them or hate them, they’re always there. They might frustrate you or make you sad, but they can also be the people that love and support you the most. To celebrate these incredible women who will always give us their honest opinions (even when we don’t want them to), here are the best 40 quotes for mother-in-law on the internet.

A mother-in-law will be your protector, your guide, your mom when you need her, and she’s never going away. And they’re the women that made the people we love, and that’s something that we’ll never forget.

#1. “A mother gives you a life, a mother-in-law gives you her life.” — Amit Kalantri

#3. “I went from resenting my mother-in-law to accepting her, finally to appreciating her. What appeared to be her diffidence when I was first married, I now value as serenity.” — Ayelet Waldman

#4. “When you have a wonderful mother-in-law who takes sides with you in squabbles with her own daughter — that’s something.” — Lou Gehrig

#6. “The grumbling mother-in-law forgets that she once was a bride.” — Greek Proverb

#8. “Mothers-in-law are fine so long as they are deaf and blind.” — Yiddish Proverbs

#9. “The mothers-in-law themselves weren’t natural jokes but most comedians used to use that.” — Allen Toussaint

#12. “Mother-in-law and daughter-in-law can be cooked together but they will never be tender.” — French Proverb

#14. “If you have a mother-in-law with only one eye and she has it in the center of her forehead, don’t keep her in the living room.” — Lyndon B. Johnson

#15. “A mother-in-law is better than a single and childless political persona, though.” — Vladimir Zhirinovsky

#16. “Never rely on the glory of the morning or the smiles of your mother-in-law.” — Japanese Proverb

#17. “The day two girls or women can genuinely be friends to each other, we will see then no war, camouflaged or open, between the wife and her mother-in-law in any house.” — Anuj Somany

#18. “Behind every successful man is a proud wife and a surprised mother-in-law.” — Hubert H. Humphrey

#19. “I haven’t spoken to my mother-in-law for eighteen months; I don’t like to interrupt her.” — Ken Dodd

#21. “The mother of a trophy wife is not automatically a trophy mother-in-law.” — John Grisham

#22. “I always know when it’s the mother-in-law knocking at the door — the mice throw themselves in the traps.” — Les Dawson

#23. “My mother-in-law had a pain beneath her left breast. Turned out to be a trick knee.” — Phyllis Diller

#24. “The only thing more intimidating than a huge international film star is your mother-in-law.” — Benjamin Walker

#25. “My mother-in-law has come round to our house at Christmas seven years running. This year, we’re having a change. We’re going to let her in.” — Les Dawson

#26. “I can’t believe she’s lived this long. God must be avoiding her.” ― Brian Francis

#27. “I wanted to do something nice, so I bought my mother-in-law a chair. Now they won’t let me plug it in.” — Henny Youngman

#28. “Greet everyone cordially when you don’t know who your in-laws are going to be.” — Malagasy Proverb

#29. “On Valentine’s Day, I wired flowers for my mother-in-law, but she found the fuse.” — Milton Berle

#30. “Be kind to your mother-in-law but pay for her board at some good hotel.” — Josh Billings

#31. “I just got back from a pleasure trip; I took my mother-in-law to the airport.” — Henny Youngman

#32. “Scrum is like your mother-in-law, it points out all your faults.” — Ken Schwaber

#33. “Mothers-in-law do not make good house pets. Once, I had the most wonderful dream; I dreamed that mothers-in-law cost money and I couldn’t afford one.” — Phyllis Diller

#34. “The mother-in-law came round last week. It was absolutely pouring down. So I opened the door and I saw her there and I said, ‘Mother, don’t just stand there in the rain. Go home.’” — Les Dawson

#35. “But there, everything has its drawbacks, as the man said when his mother-in-law died, and they came down upon him for the funeral expenses.” — Jerome K. Jerome

#36. “My mother-in-law belongs in Hell, but the devil is afraid she’ll end up taking over.” ― Matshona Dhliwayo

#37. “A person often catches a cold when a mother-in-law comes to visit. Patients mentioned mothers-in-law so often that we came to consider them a common cause of disease in the United States.” — Thomas Holmes

#39. “Your sweet phone calls and letters are nice because that means you’re really far away.” — Unknown

#40. “A mother-in-law made of sugar still tastes bitter.” — Catalonian Proverb

A mother-in-law — a gift that you never needed, but one that keeps on giving.

All jokes aside, a mother-in-law will be there when you need her and love you like you’re her own child. Even though we can get upset sometimes at the things they say, it usually comes from a place of love. So if you ever need a good laugh or something to remember her by, you can always turn to these quotes for mother-in-law.