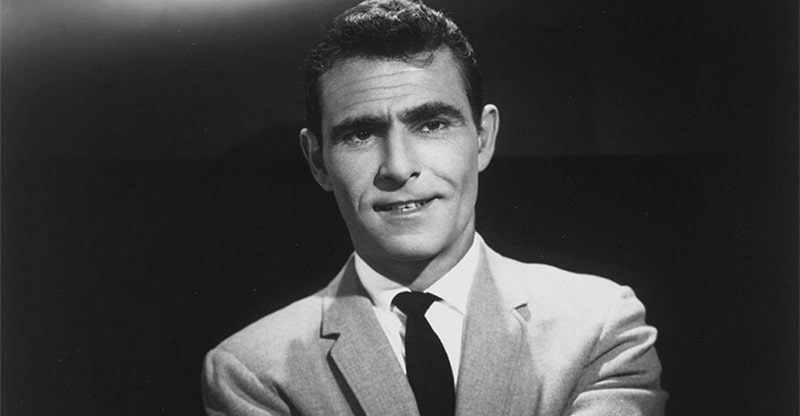 Born on the 24th of December 1924, he considers himself to have been a Christmas present delivered unwrapped. Rodman Serling was a gifted screenwriter, television producer, and narrator. His hypnotic show “The Twilight Zone” couldn’t be more relevant, creating a spooky way of predicting the future. Read these Rod Serling quotes for a fulfilling morning routine.

29 Rod Serling Quotes That Will Renew Your Spirit

#1. “You see. No shock. No engulfment. No tearing asunder. What you feared would come like an explosion is like a whisper. What you thought was the end is the beginning.” ― Rod Serling

#2. “According to the Bible, God created the heavens and the Earth. It is man’s prerogative―and woman’s―to create their own particular and private hell.” ― Rod Serling, The Twilight Zone: Complete Stories

#3. “If in any quest for magic, in any search for sorcery, witchery, legerdemain, first check the human spirit.” ― Rod Serling, The Twilight Zone: Complete Stories

#4. “A sickness known as hate; not a virus, not a microbe, not a germ―but a sickness nonetheless, highly contagious, deadly in its effects. Don’t look for it in the Twilight Zone―look for it in a mirror. Look for it before the light goes out altogether.” ― Rod Serling

#5. “As long as they talk about you, you’re not really dead, as long as they speak your name, you continue. A legend doesn’t die, just because the man dies.” ― Rod Serling

#6. “Being like everybody is the same as being nobody.” ― Rod Serling

#7. “There is a fifth dimension beyond that which is known to man. A dimension as vast as space and as timeless as infinity. It is the middle ground between light and shadow, between science and superstition, and it lies between the pit of man’s fears and the summit of his knowledge. This is the dimension of imagination.” ― Rod Serling

#8. “This highway leads to the shadowy tip of reality: you’re on a through route to the land of the different, the bizarre, the unexplainable. Go as far as you like on this road. Its limits are only those of mind itself. Ladies and Gentlemen, you’re entering the wondrous dimension of imagination. Next stop The Twilight Zone.” ― Rod Serling

#9. “Fantasy is the impossible made probable. Science Fiction is the improbable made possible.” ― Rod Serling

#12. “Imagination. Its limits are only those of the mind itself.” ― Rod Serling

Rod Serling Quotes on Being an Actor and Writer

#13. “Every writer is a frustrated actor who recites his lines in the hidden auditorium of his skull.” ― Rod Serling

#15. “It has forever been thus: So long as men write what they think, then all of the other freedoms―all of them―may remain intact. And it is then that writing becomes a weapon of truth, an article of faith, an act of courage.” ― Rod Serling

#16. “The writer’s role is to menace the public’s conscience. He must have a position, a point of view. He must see the arts as a vehicle of social criticism and he must focus on the issues of his time.” ― Rod Serling

#18. “There is nothing in the dark that isn’t there when the lights are on.” ― Rod Serling

#19. “Coming up with ideas is the easiest thing on earth. Putting them down is the hardest.” ― Rod Serling

#20. “For civilization to survive, the human race has to remain civilized” ― Rod Serling

#21. “If you write, fix pipes, grade papers, lay bricks or drive a taxi―do it with a sense of pride. And do it the best you know how. Be cognizant and sympathetic to the guy alongside, because he wants a place in the sun, too. And always, always look past his color, his creed, his religion and the shape of his ears. Look for the whole person. Judge him as the whole person.” ― Rod Serling

#22. “We’re developing a new citizenry. One that will be very selective about cereals and automobiles, but won’t be able to think.” ― Rod Serling

#23. “It is difficult to produce a television documentary that is both incisive and probing when every twelve minutes one is interrupted by twelve dancing rabbits singing about toilet paper.” ― Rod Serling

Rod Serling Quotes That Are Philosophical to Read

#24. “Any state, any entity, any ideology that fails to recognize the worth, the dignity, the rights of man, that state is obsolete” ― Rod Serling

#25. “Some people possess talent, others are possessed by it. When that happens, a talent becomes a curse.” ― Rod Serling

#26. “Every man is put on earth condemned to die. Time and method of execution unknown.” ― Rod Serling, The Twilight Zone: Complete Stories

#27. “The worst aspect of our time is prejudice. In almost everything I’ve written, there is a thread of this―man’s seemingly palpable need to dislike someone other than himself.” ― Rod Serling

#28. “The ultimate obscenity is not caring, not doing something about what you feel, not feeling! Just drawing back and drawing in, becoming narcissistic.” ― Rod Serling

#29. “For the record, suspicion can kill, and prejudice can destroy. And a thoughtless, frightened search for a scapegoat has a fallout all its own, for the children and the children yet unborn. And the pity of it is that these things cannot be confined to the Twilight Zone.” ― Rod Serling

Reading these Rod Serling quotes helps you begin your day on a positive note. His opinions on advertising, politics, and racial inequity remain relevant decades after his passing. His wit and wisdom live on through these quotes.