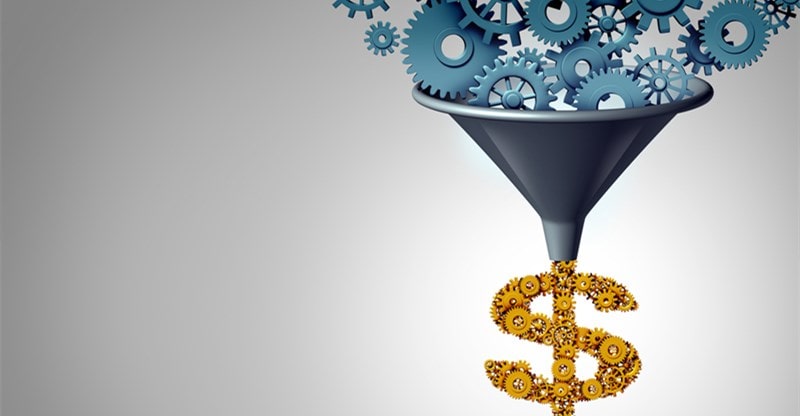 Sales funnels aren’t big hoses that suck up customers, but the metaphor is apt. The idea is to collect as many people as you can at the top and then slowly but surely filter them towards conversion.

Some will splash out of your funnel and never interact with your business again. Others will dribble out over the floor without parting with a single dollar. But some will end up exactly where you want them to be – paying you regularly for your products and services.

You should think of sales funnels as being a lot messier than a standard funnel you might use to decant fuel into a tank.

In marketing, the person holding the funnel is inebriated, wobbling all over the place. They’re also awful at pouring the liquid in the top, splashing it everywhere. And they’re probably standing on the deck of a ship in rough weather as they try to do it.

It’s a messy process. But that has nothing to do with the funnel itself. Without it, they’d be doing even worse.

Marketing funnels are hyped to a ridiculous extent. But what the heck are they?

What Are Sales Funnels?

Marketing funnels are a way of breaking up the customer journey into different stages, based on the number of people affected by each.

At the top of the funnel is “awareness” – how many people register your brand in your advertising. This stage affects the most people.

As you move down the funnel, you enter realms like “interest” where customers believe they can benefit from your product and evaluation.

If they like what they see, they’ll move to the commitment stage, asking for trials and demonstrations. And if they’re still convinced, they’ll part with their money.

Why Are Sales Funnels Hyped?

Sales funnels are becoming super hyped because of how they guide customers from initial interest to final sale.

You can think of them a bit like a pipeline where you attempt to put people on rails towards conversion. Of course, some are going to fall off the track. But many more will stick it out and eventually arrive at the desired location.

The interesting thing about sales funnels is that you can customise them how you like according to your customers’ needs. Flowcode has some exciting things to say on this subject. For instance, you could put a QR code on a poster that forwards customers to a landing page where they can then buy your service. That would be an example of a bespoke sales funnel.

Another example might be to get somebody to complete a personality assessment and then send them an email with more information on the next steps they should take. The possibilities are endless. But the basic concept is the same throughout.

Sales funnels are hyped because they work. So long as you know your target audience and understand what they want, you’re often able to drive conversions and get the results that you want. If you can automate them, that’s even better.