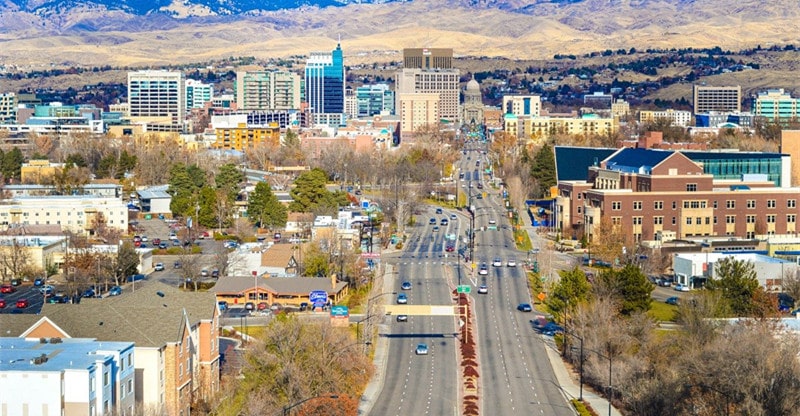 When most people are looking for a place to settle, Idaho usually isn’t the first on their list. The large state in the western United States often gets overlooked because of its reputation as a dull place with potato farms being Idaho’s only claim to fame.

There are many reasons to move to Idaho. The following is just a sampling of some of those top reasons.

If you love being out in nature, then Idaho will be your paradise. From the deserts in the southern part of the state to the Sawtooth and the Rocky Mountains, you’re sure to find an outdoor activity that fits your lifestyle. During the winter months, snow skiing is a popular sport. In less than an hour from the capital city of Boise, you can cut up the slopes of Bogus Basin, one of Idaho’s premier ski destinations.

If you drive a little further north where you can find Brundage Ski Resort, located in the heart of the Payette National Forest. Or you can hit the slopes at the world-class Sun Valley Ski resort. Sun Valley has been home to such luminaries as Ernest Hemingway, Clint Eastwood, and Bruce Willis. Cross country skiing is another popular sport during the winter.

Boise is no longer a sleepy little town in the southern part of Idaho. It has seen massive growth over the last two decades. The downtown Boise area is a vibrant community with plenty to do. People enjoy everything from museums and fine dining to live music venues and a variety of bars.

All of this creates an energetic city for anyone who enjoys getting out of the house and living life to the fullest. Another reason why people love Boise is that it has a mild climate. The summer doesn’t get too hot and winters are pretty mild. For those living in other parts of the country, where the weather can be more extreme, Boise’s mild climate is very enticing.

While Boise doesn’t have an international airport, you can easily find direct flights to many popular destinations in the western United States. Several top national airlines already serve Boise and the city is drawing up plans for an airport expansion to make room for even more airlines. Finally, Boise has a very low crime rate. In fact, the entire state of Idaho has one of the lowest crime rates in the country.

Idaho is becoming a haven for tech companies, startups, and other businesses, meaning jobs in the state are plentiful. The technology sector is really booming as companies look for alternatives to Silicon Valley, where even well-paid employees have a tough time with the high cost of living. And it’s not just new startups either, several more traditional tech companies have put their roots down in Idaho, including computer giant HP and chip maker Micron. Each employs thousands of people.

Currently, healthcare workers enjoy some of the highest wages in the country. If you have an entrepreneurial spirit, then Idaho is a great place to start a business. With low taxes, costs, and regulation, starting a business in Idaho is both easier and cheaper. Entrepreneurs could get a legal business up and running in a matter of hours because there’s very little red tape for business licensing.

The housing market in Boise is not just healthy and growing, but it’s also affordable. If you’re moving from a state like California, the cost of living in Idaho is downright cheap. In Boise and the surrounding areas, for example, the cost of living is 8% below the national average. Location is everything.

When deciding where to settle, you’ll want to be in an area with good schools, fun recreational activities, and close to the local businesses you’ll need. This can all seem very overwhelming, and like the real estate professionals at HomesinMeridian.com say, don’t stress yourself out trying to research everything yourself. There are a lot of resources that can help you find all those little details.

According to U.S. Census data, Idaho has a very high homeownership rate – the 12th highest in the nation. This is partially because Idaho sports some of the lowest property taxes in the country. So if you’re sick of apartment life and want to buy your own home, then Idaho is the place for you.

The arts and culture scene in Idaho is thriving. If you’re into music, you’ll find several music festivals held throughout the year, many of them attracting top musicians from around the country.

For example, jazz lovers can enjoy three large festivals: the Lionel Hampton Jazz Festival; Gene Harris Jazz Festival, and the Sun Valley Jazz Festival. All three are scheduled at different times throughout the year. If jazz isn’t your thing, then you can take in the Treefort Music Festival, which features top acts from around the world. The festival is conveniently located in the heart of downtown Boise.

If you’re more into Shakespeare, then you’ll love the Idaho Shakespeare Festival. This is a world-class event where you can watch multiple Shakespeare plays starting in May and continuing throughout the summer. One of the best parts of this festival is that it’s outside and you are encouraged to pack a picnic lunch or dinner (don’t forget the wine).

Art lovers shouldn’t need to feel left out. Each September local artists and craftsmen display their creations at one of Boise’s beautiful parks. Aside from viewing art, patrons can also buy prints, enjoy delicious food, and kids can participate in workshops. The event is organized by the Boise Art Museum.

Idaho is one of the best-hidden secrets in the country. With plenty of outdoor activities, a great housing and job market, and plenty of culture, Idaho is a perfect place to settle down and enjoy life. This state is what you make of it. You can enjoy the fast-paced city life in Boise, or you can enjoy a laid-back life in one of the many rural towns that dot the landscape throughout the state.