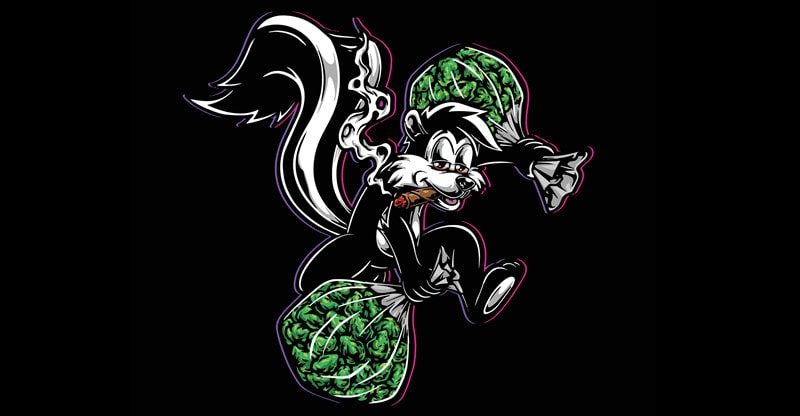 If you’ve ever come into contact with fresh marijuana, you may have noticed it’s got a somewhat unusual aroma, a scent that many have called “skunky”. Well, we’re here to break that down, and hopefully understand what gives Cannabis its distinctive scent, and why it sometimes smells a little bit like skunk spray.

Now, first things first, it’s worth noting that the smell of Cannabis is actually not just one particular scent, but rather a combination of several scents and aromas, all combined into one heady bouquet. Different plants may have different scents, with some Cannabis smelling more citrus-y, while others will have a more floral tang.

These scents are actually the result of a specific class of molecules, called terpenes, which are responsible for most scents in the natural world. Still, you may be thinking, since most plants don’t actively smell like skunk spray, what’s the deal with marijuana? That’s a good question.

According to Wildlife X Team experts, the reason why Cannabis has a strong skunky scent is its high sulfur content. Research has found notable sulfur quantities in most types of Cannabis, which is also the case for skunk spray. Skunk spray also has a high sulfur content, which is actually why, when you get sprayed on sensitive areas (like the nose, or eyes), it feels like burning. That’s because sulfur is actually a burning agent, and creates that unpleasant sensation.

This research is actually quite exciting, since before, Cannabis wasn’t thought to contain traces of sulfur, and it’s actually the first time it’s found actively in nature.

According to researchers at Abstrax Tech, Cannabis contains many components similar to those found in garlic, including phenylthiol. Overall, this accounts for garlic’s strong scent and overpowering flavor. And the same is true for marijuana.

Even though these compounds have been found in fairly small concentrations (as is the case for garlic), a little goes a long way, and even a small amount of the compound is enough to give Cannabis an overpowering aroma.

Hearing that Cannabis contains some of the same compounds as skunk spray, some people are understandably concerned that cannabis might be made dangerous by this component. Luckily though, that is not the case.

First of all, it’s worth noting that skunk spray itself isn’t actually dangerous in a toxic way, but rather just really unpleasant. Because skunk spray has that powerful burning sensation attached to it, it may feel like you’re being under attack, but the actual damage skunk spray can do is very limited. The biggest concern posed by skunk spray is the long-lingering scent, if anything, not the compounds in the spray themselves.

This means, phenylthiol doesn’t make Cannabis dangerous, either, but simply gives it a strong scent.

Is that a problem?

This actually depends on the person. Just like there are some people out there who are immune to the smell of skunk spray, there are people who don’t mind the pungent smell of Cannabis, either. In fact, there are even some people who will pay extra for “skunk” Cannabis, as they believe this to be an indicator of superior quality.

On the other hand, there are also those who literally can not stand the scent of skunk Cannabis, and will go to quite extreme lengths to avoid it. So basically, whether or not the smell of Cannabis bothers you depends on how you’re built, just like whether or not skunk spray bothers you.

But since the phenylthiol doesn’t make cannabis actively dangerous or concerning, there’s no reason why you should take steps to avoid it (unless you’ve got a problem with the smell).

Cannabis is probably one of the most aromatic plants on the planet.

While it has polarized Cannabis aficionados, based on scent alone, the scientific community is actually quite excited by the discovery of sulfur in Cannabis. This is because, adding to the existing overwhelming bouquet of fragrances and aromas contained in Cannabis, this discovery makes Cannabis one of the most fragrant plants in the world.

It’s now believed that Cannabis is actually more fragrant, and brings together more distinctive aromas than wine, even, which is known for its rich bouquet. As with wine, presumably, the following is also true for Cannabis: the richer and more exotic the bouquet, the more flavorful the aftertaste.

Hopefully, now you’ve got a better understanding of what gives Cannabis its unusual scent, and hopefully, although we can’t stop you from thinking of skunks, you’ll at least know, in the future, that the scents are unrelated.

While they’re both sulfur-based, a Cannabis plant will never rummage through your garbage, or attempt to spray you if it feels threatened. So maybe that’s some small consolation, to make up for the deeply pungent scent.