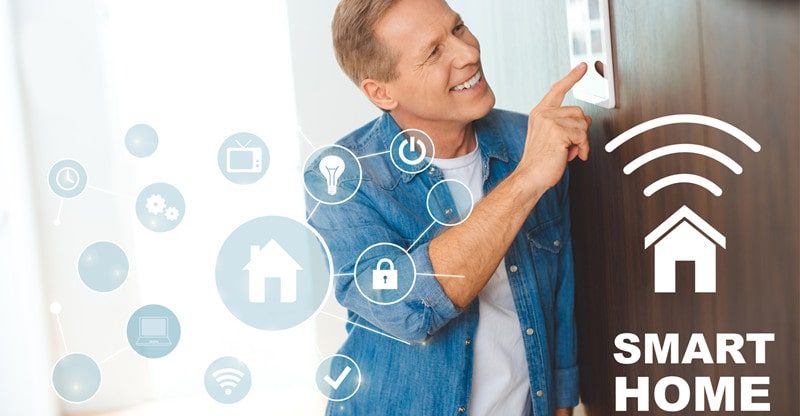 Over the last few years, the term ‘smart home’ has become something of a buzzword among technology-conscious homeowners. A home of this kind includes appliances which are capable of communicating not only with other appliances in the home, but with the wider world. They’re able to predict the demand placed on them, and log your behavior to make better predictions in the future. For example, a smart thermostat might log when you’re home, and try to adjust the heating schedule to make life more comfortable for you while you’re indoors.

There’s no set threshold at which a home becomes ‘smart’, and you don’t have to spend a lot to reap the benefits of this kind of technology. Let’s take a look at some of the items that might make a difference in your home.

A smart garage door is one that’s able to communicate over Wi-Fi, so that you don’t have to use a separate remote control to get things open. Opening up your home based on Wi-Fi commands represents a little bit of a security threat, so this might be something that you don’t want to DIY.

If you’ve always wanted to grow your own fruits and vegetables in your back garden, or even on your balcony, then a smart irrigation system might be the way to do it. You can run a series of temperature and humidity probes to a small computer, like a Raspberry Pi, and then use a motorized pump to irrigate accordingly. Or, you can get a small premade solution for your kitchen.

Smart lighting isn’t just about making your home glow every color of the rainbow. They’re also great for creating a vibe that’s right for you. If you’re working, you might prefer the light to be slightly colder; if you’re relaxing, then warm vibes might be called for. Similarly, you might set the lights to dim slightly in the evening, giving you a better pre-bed routine.

Getting your home security smart has several advantages. You might invest in a smart lock to log attempts at entry, and smart cameras to cover the entire home wirelessly. In the former case, you get the option of keyless entry, which works a little bit like access control in a workplace.

What if I want to DIY?

If you’ve got an idea for a smart invention for use in the home, then it’s never been easier to make it a reality. With the help of a few cables, and key components like motor controls, you’ll be able to build everything from smart pumps to automatically-opening compartments. There’s a wealth of resources out there for would-be inventors, and you can even get the kids involved in your projects.