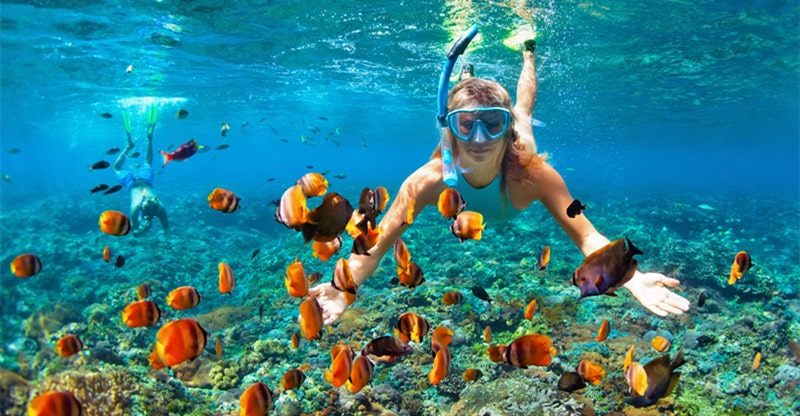 You and many others constantly ask yourself where is the best country to live in? An understandable question but one that is pretty hard to answer definitively. That being said, we can definitely talk about the best vacation spots to have as travel destinations and one of these vacation destinations in Thailand.

This is because Thailand is a great place to have as a vacation destination if you wish to do water activities like diving, snorkelling, or just chilling by the beach. To be more specific, we’ll be focusing on the place known as Phuket.

Phuket is a quaint island located in Thailand and the tourist attraction is filled with tall trees and tropical features as well as other natural bodies, making it a snorkelling destination. The island is home to many mountains and is located as part of the Andaman Sea.

Imagine going to Thailand and booking your hotel on Karta and after staying in your room for a short while, you start thinking of where you can go to snorkel in Thailand or what the best time to snorkel is. Phuket is your answer since it has so many snorkelling beaches that are next to clean water bodies.

There are several top-level resorts by the beaches or next to the sea as well as good spas for you to feel nice and restaurants where you can fill your belly. At night, you can check out karaoke or nightclubs to have a good time at the disco. Maybe even a calmer setting would be the bars so you could hang out while having a drink.

Today, the focus is on the best snorkelling destinations in Phuket, and they are mostly smaller islands for Phuket snorkel. The best places to snorkel are listed below:

The most popular island when leaving Phuket, this Phuket snorkel destination increased in popularity to an even greater level when a film called The Beach was shot there. The area is quite far so going there for only a day might leave you too stressed to go anywhere and do anything. A second day would help you really enjoy the tropical island and the beaches where you can snorkel. Phi Phi is one of the best places to snorkel.

Another great destination for you to snorkel in Thailand is the Similan Islands. The island might be somewhat distanced from Phuket itself, which means you probably shouldn’t have a single-day trip if you wish to enjoy it as one of the best snorkelling areas, but it is worth it. The island has some of the most beautiful places to take pictures and snorkel. You should, however, be wary of the accommodation standards on the island.

A fantastic snorkelling destination, Racha Island is located in Southern Phuket and is not too far when going there on a speedboat. It is a popular site for diving and is home to three resorts all of which are pretty good. The Racha, in particular, is a great resort that you might want to check out when visiting the island alongside snorkelling on any of the two beaches in the area.

When talking about proximity, Koh Bon is a relatively good choice because it saves you the stress of going by a speedboat. Using a traditional longtail boat, you could arrive at the island from a nearby beach. Despite being small, the island houses two beaches of which the first is used by the public for snorkelling and other activities and where you can ding the Bon Restaurant. The other beach used to be only for the use of the people that formerly frequented a now-defunct resort.

Situated in the southern part of Phuket, this island is close as well and used to be where a luxurious hotel operated. The beach next to the now-closed hotel is open to all, with people able to play beach sports, have picnics, snorkel, go diving, and do other fun activities.

A secluded and private island that can give you a more isolationist experience of a beach and the tropical experience. If that is more of your thing, this is a great snorkelling destination but that is not all. You can basically do whatever you want as long as it is within reason such as swimming, eating, and going to the pearl farm.

The Koh Khai is a group of three small but nice islands quite close to Phuket. Located in the eastern part of Phuket, these islands are a great place to snorkel in Thailand, bask in the sun, go swimming in the clean water. Be sure not to feed the hungry fish, though, as that is against their laws.

Also known as Koh Hae, this island is arguably the easiest island to access. A quarter of an hour is more than enough to get to Coral Island by speed boat. Going to the snorkelling beach and having a good time is advised even when the water level is low. Accommodation might not be the most sophisticated but the service from those that work there is lovely. There are bungalows that you can rent next to the beach and the island has two beaches.

This village is made up of stilts and is close to a nearby famous island that will be mentioned below. The village is a very unique area to visit albeit frantic due to several people coming to eat at the seafood restaurants during lunch – hence, it would be better to arrive at the village early before everyone else so you could enjoy the place to the fullest. You could even rent a car to drive over to the pier and from there, you’ll pay to be taken to the village itself.

The traditional name for it by the people of Phuket is Khao Ping Kan, but people outside know it as James Bond Island. The island is in the North-East area of Phuket and it was the setting for the James Bond movie, The man With The Golden Gun. A very iconic place in Phuket to visit and have a good time.