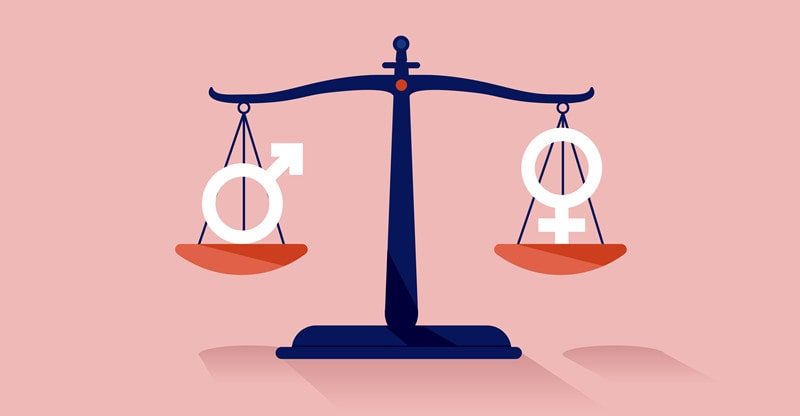 Today’s younger generations might be pushing to dismantle gender roles and stereotypical views, but the reality is that many of them still exist in society. Most of them exist without people really giving them a second thought. That’s a bit ironic, considering that some of the most common gender roles still in existence are also, arguably, the strangest.

Topics like abortion and gender pay gaps get a lot of national (and international) attention – and they should! However, there are smaller everyday ways that men, women, and non-binary individuals are treated differently and even discriminated against.

Let’s take a look at a few of the strange ways society treats genders differently. With the way things are going, it’s likely these “gender norms” won’t last forever, but it’s still important to recognize them now – even if you cringe at how outdated they are.

If you walk into just about any women’s bathroom in the country, you’ll find at least one baby changing table. Sometimes it’s in the public area of the bathroom. Other times, it’s in a handicapped stall so a mother and baby will have more room.

These changing tables are great for moms on the go, so they can bring their little ones with them when they grocery shop or have a day out.

However, have you ever wondered why there aren’t changing tables in all men’s restrooms?

To be fair, most newly-constructed buildings with public restrooms do feature changing tables in both men’s and women’s bathrooms. But, older buildings that haven’t been updated in a while still don’t feature them.

In 2016, President Obama signed the BABIES Act, which ensured the installation of changing tables in all public restrooms in government buildings, but private businesses still haven’t had to make that change. That has left men and non-binary individuals in messy (sometimes literally!) situations. They’ve had to get creative with how to change their children, or have had to wait to reach a location with a changing station available.

Have you ever complimented a woman on a new dress? If so, you’ll be able to tell if she really likes it or not by whether she comments on it having pockets.

That might be a joke, but the premise behind it isn’t. Ask almost any woman if she loves items with pockets, and she’ll give you an enthusiastic “yes!” The standard pockets for women’s jeans, pants, and shirts are usually too small to carry much of anything and serve as more of a fashion statement than a functional addition to the clothing.

The pocket problem is nothing new, and also has a strange sexist history. Women have essentially been fighting for bigger pockets since the 17th century, but from petticoats and corsets to skinny jeans, society has been more focused on women looking a certain way in their clothing rather than offering the opportunity to store their belongings.

Instead, most women have to carry around a large handbag to carry everything they need with them. Hopefully, one day, those heavy handbags can be used to smash the patriarchy.

While most people understand the genuine unfairness of the gender pay gap, what you might not know is that those financial inequalities extend well beyond the workplace.

For example, studies have shown that women tend to pay more for car insurance than men, despite getting into fewer accidents. Research from The Zebra found in 2020 that women can actually pay up to 7.6% more than their male counterparts.

The worst part about it, however, is that there’s no real indicator as to why that is. It’s led several states to issue a “gender ban” on car insurance premiums, but it’s not a nationwide ban as of yet. And, without any real reason to smack higher premiums on female drivers, this strange practice feels like nothing more than a slap in the face to women.

Most people have at least heard of the “pink tax,” but aren’t fully aware of what it entails. While it’s not a tax in the literal sense, it’s a term used to describe the fact that products directed specifically toward females are typically more expensive than those marketed to men. Some of the best examples include:

Most brands can try to deny the existence of the pink tax on their products, but when comparing apples to apples, it’s clear to see that women generally pay more for the same type of products as men. When you factor in that many women make less money than men, it creates an even greater disparity.

Unfortunately, these four strange practices are only the tip of the iceberg when it comes to how society treats genders differently. While views are changing and progress is being made, it’s clear that we have a long way to go when it comes to total equality.

Ainsley Lawrence is a writer who loves to talk about how business and professionalism intersect with the personal, social, and technological needs of today. She is frequently lost in a good book.