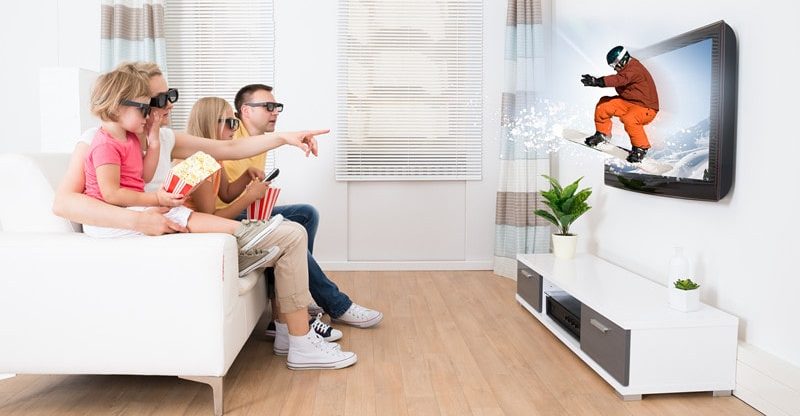 Parents can have a hard time finding good sports movies for kids that they also enjoy.  If you can find the right movies, it can be a lot of fun for the entire family. A movie night together can provide a good opportunity for a family discussion when the movie is over – one that you can involve your kids in.

The thing is, many of the good movies for kids teach important life lessons.  Some of the movies I’ve seen address topics like commitment to teammates and good sportsmanship, overcoming hardships and beating the odds, establishing solid friendships, building trust with others, and accepting racial and cultural diversity. Sports movies can also spark an interest in sports for your kids and lead them down a path of active living that’ll pay dividends down the line.

So without further ado, here are the 11 best sports movies to watch with your kids.

Sports Movies for the Entire Family

Rudy charts the true story of Rudy Ruettiger who always dreamed of playing college football. However, he is unable to afford the fees to attend university, while also lacking in some of the skills required to succeed. He is instead resigned to working at his father’s steel mill. A major life-changing event triggers Rudy to follow his lifelong dream.

The film chronicles the difficulties that Rudy faced and had to learn to overcome in order to make it to the college football team. This is a fantastic film for the family. It shows that grit and determination is what it takes to try and make yourself successful. While you will not always be able to reach the dreams you have in life, you stand a much better chance if you are willing to put the effort in.

The Sandlot is a coming of age film set in the 1960s. In The Sandlot, Scotty moves to a small town where he struggles to make friends. Eventually, he befriends a group of baseballers. While Scotty is initially poor at baseball, his determination to succeed eventually scores him an invite to the team.

The Sandlot isn’t so much about the baseball, but the friends that we make when we are growing up. Families will love it. It will demonstrate to their children just how important it is to cherish your childhood. We will all eventually grow up and take different life directions to our friends, but we will always have the memories of key moments from our childhood. These memories are what shape who we become.

Everybody knows the story of Karate Kid. It is one of the most famous sports movies of all time. A boy wants to learn karate and enlists the help of a teacher. The sport isn’t the focus of this movie. It merely exists as a driver to move the plot forward. Karate Kid, to us, is more about our relationships with others.

Hoosiers is an Academy Award-nominated film that has been labeled as one of the most important cultural films in the United States, earning a place in the Library of Congress archive.

Hoosiers is a semi-autobiographical movie that charts the success of a small-town basketball team winning the state championship.

When a new manager takes over the team, he realizes the huge challenge he has ahead of him. There are barely any players, and the ones that do exist are not in the best possible shape. His best player is unwilling to listen to him. It is up to the manager to shape the team. To create a team of winners from nothingness.

Hoosiers is a great movie for the family, as it showcases the importance of teamwork. It shows that even the lowest skilled players can succeed, if they work as a team together. It really does show that you can achieve whatever you want, if you put your mind to it.

Kicking and Screaming is a soccer-focused comedy film. Clearly unhappy with their lives, a father and a son try to take control of rival soccer teams in order to beat the other. There is lots of competition along the way. Good amount of comedy, leading to an awe-inspiring finale.

The message behind this movie is that there is more to life than just winning. Competition doesn’t get you anywhere. It is forging relationships with your friends and family which does.

Cars is a top-notch movie from Pixar. The movie is filled with talking cars, which is right away going to pull in the youngest children. If that doesn’t, the bright colors certainly will.

In Cars, Lightning McQueen is a rookie on the racing circuit, but he already has what it takes to succeed at the highest level. Along the way, Lightning realizes that there is more to life than just winning. It is about making friends. It is about cherishing the relationships that you have. If you can do that, then you can be sure that your friends are going to be there when you need them the most.

Kids will learn that if you believe in something enough, you have a chance to succeed. It is better to do the things that you love as opposed to being stuck with something you hate. True enjoyment comes from chasing your dreams. You may not always fulfill your dreams, but trying is what counts.

Michael Jordan and a bunch of the Looney Toons star in this classic live action-animated hybrid movie. The story picks up after Michael Jordan’s real-life retirement in pursuit of a baseball career. In this movie, a group of aliens arrive on Earth. Their plan is to ‘kidnap’ the Looney Toons to bring them back to their home planet. The Looney Toons hear about this plan, and instead challenge the aliens to a game of basketball.

Snails may be slow, but that isn’t going to stand in the way of Theo’s dream of becoming the fastest racer in the world. He is shunned in the snail community, with most other snails seeing his dreams as nothing more than bluff. They see no way in which Theo will ever succeed as a racer.

One day, an accident with a car gives Theo superpowers which makes him one of the fastest animals in the world. He finds it tough to get the opportunity to show off his talents, however. Eventually, Theo can challenge real cars. Sure, the plot is a little bit out there, but Turbo is a sweet story about chasing your dreams and, above all, working with your friends when things get a little bit too hard to cope with on your own.

Hoop Dreams is a documentary movie that looks at two African American students who aspire to be professional basketball players. The film begins shortly after these students have been spotted by a basketball scout. It follows the students through five years of highs and lows in their quest to become successful.

The Blind Side is a dramatic biographical film which charts the life of Michael Oher, a player for the Baltimore Ravens in the NFL. It follows his story from his life of poverty to life on the ‘big stage’.

This movie tackles hard-hitting issues such as poverty, racism, and adoption. This is another movie for older kids as, once again, it demonstrates that you can succeed when odds are stacked against you. Michael Oher is proof of this.

As you can see, there are a lot of sports movies for kids that can provide entertainment for the entire family.  Kids of all ages can watch some great movies, and parents can enjoy them too.

Sports movies for kids can provide some great life lessons within the plot of the movies.  Watching these movies with your kids can provide the family time that offers a sense of connection and opportunities for family discussion about important life issues, some of them that your child might be facing right now.  It can be empowering for parents to help their kids understand things like the importance of family and friends in such a fun way.