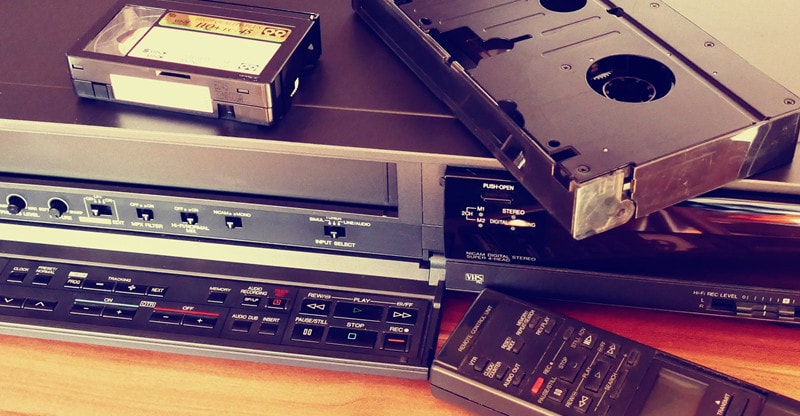 The advent of digital technology has revolutionized the way we chronicle our lives. From photographs to videos and from cassette tapes to digitally stored recordings, what is possible is changing so fast. What is normal for one generation is obsolete for the next generation.

Cassette tapes and VHS tapes were once the cutting-edge technologies of how people would listen to music, watch films, and record landmark events, but those methods are now considered a thing of the past.

Dinosaurs of the Recording Industry

A great industry was built around the potential of magnetized tapes to record different sounds and images. The movie industry, which is taken for granted reality in our times grew by leaps and bounds because of analog recording and VHS tapes. The music industry was able to grow and transmit millions of songs through cassette tapes.

There are now three types of tech that are on the verge of becoming obsolete. These are cassette tapes, broadcast tapes, and VHS tapes which had a heyday as the way people could watch movies in their own homes. Compared to DVDs and USB flash drives, these tapes are somewhat bulky to store. They are also vulnerable to mold if they are not kept under the right conditions.

The digital revolution continued to explore how to record events, the main difference being that digital recordings could be saved into DVD discs and small USB flash drives. Information and recordings could be better shared and transmitted using digital technology, inadvertently causing cassette and VHS tapes to be on the verge of becoming obsolete as digital products rapidly took the place of analog products.

The speed of the digital revolution is so fast that it has become the most popular way for people to record their memories or important events in their lives. Most adults of this generation experienced watching and making recordings through tape or VHS.

However, the generation of their children may only have been exposed to digital technology. There is a niche service for bridging the gap from VHS to DVD, and those who provide this service are helping people preserve their priceless memories. By converting analog files to digital ones, the tape recordings are saved in a way that they can last for a much longer period of time.

The digital revolution continues to allow people to record photos, videos, and music with ease and the devices are becoming quite affordable for many people. The devices for recording as well as for storing recordings are also becoming very compact.

From the big box type cameras, video can be taken with a handheld device that is also a mobile phone. From cassette, VHS tapes, DVDs, and now to the thumb-sized USB flash drives, music, and other recordings have shrunk in physical size without losing their quality.

The three types of technology that are on the verge of becoming obsolete definitely served their purpose as a bridge for the improvement of the recording industry. Without magnetic tapes, we would not be blue to reach the digital revolution which has quickly become the standard of available technology.