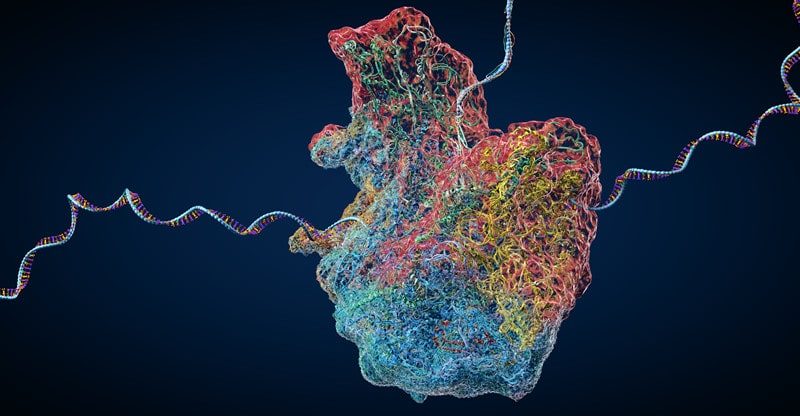 So, you want to know what are ribosomes, where they can be found, and how they work? Well, you have come to the right place.

The average cell in the human body contains 10 million Ribosomes – which are made up of proteins and RNA. Ribosomes’ function within the cell is to synthesize proteins and read RNA.

Fun Fact: Lizards are one of the only creatures on the planet who have different Ribosomes from humans. Until they are needed to synthesize proteins, lizard Ribosomes take the form of crystalline sheets.

Ribosomes are intracellular structures that produce proteins that are responsible for most of our bodily functions and are the building blocks of nearly every part of our body – including Ribosomes themselves.

Today, we are going to be exploring the fundamentals of Ribosomes and we will be learning how important they are to our body as a whole.

Ribosomes are responsible for the protein production in our bodies and are often referred to as protein factories.

Proteins are made of amino acids and have four main functions in our bodies:

There are many different types of protein that the body needs to produce – antibodies, contractile proteins, enzymes, hormonal proteins, structural proteins, storage proteins, and transport proteins.

Protein synthesizing is one of the most important things that happen in our bodies and Ribosomes are responsible for this.

Ribosomes contain rRNA, this allows them to translate mRNA. mRNA is created by the nucleus of each cell and tells the Ribosomes what proteins they need to make.

For example, Ribosomes in the Pancreas would be responsible for making digestive enzymes.

The Ribosome will read the mRNA and start to collect the appropriate amino acids that it will then string together to make a protein.

Where Can Ribosomes Be Found?

Ribosomes are much larger in eukaryotic cells, this explains why it took much longer to find them in prokaryotic cells.

Inside the cell itself, Ribosomes can be found in two different places. (1) Floating around in the cytoplasm of the cell, or, (2) bound to the Rough ER of the cell.

If the Ribosomes are floating loose inside the cell’s cytoplasm then they will be responsible for creating the proteins that the cell needs. If they are bound to the Rough ER, then the protein they make will typically be used elsewhere in the cell or on the outer walls of the cell.

You will find Ribosomes inside every living cell in the body.

How Are Ribosomes Structured?

No matter where they are found in the cell, body, or in what organism Ribosomes take the same form.

Except for in lizards, as we mentioned at the beginning of the article. In lizards, Ribosomes take the form of a flat sheet until they are needed, then they transform into something similar to the Ribosomes we have.

Ribosomes are granular complexes made up of ribonucleic acids and ribosomal proteins. There are three main parts of a Ribosome – the upper subunit, the lower subunit, and the rRNA.

The rRNA sits on top of the lower subunit. The mRNA sent out by the cell moves between the two subunits and is read by the Ribosome’s rRNA. The Ribosome then starts to create the required proteins inside the upper subunit by collecting and stringing together a series of amino acids.

The protein is then released into the cytoplasm to do the job it is supposed to do.

How Are Ribosomes Made?

Cells make their own Ribosomes using proteins and nucleic acids.

If you are wondering where the first proteins that were used to make the first Ribosomes in your body came from – they came from the sperm and eggs cells we came from and were helped out by your mother’s body.

How Were Ribosomes Discovered?

It was later discovered that Ribosomes could also be found in prokaryotic cells. These Ribosomes were much smaller but did the same job – synthesizing proteins for internal and external use.

The Evolution Of Ribosomes

One very interesting thing about Ribosomes is that they look pretty similar in all plants, bacteria, and most animals.

This suggests that Ribosomes were first developed when life was only single celled organisms. Before they were developed, these cells relied on nucleotides for their survival. These nucleotides used ribonucleotides (RNA) or deoxyribonucleotides (DNA) to produce the proteins they needed.

The first Ribosomes were believed to be a strain of self-replicating RNAs. Despite their Ribosomes being so much smaller, Prokaryotic Ribosomes evolved first.

Some scientists have found Ribosomes in cells and ancient bacteria that are over 4 billion years old.

Other Important Parts Of A Cell

The nucleus is the largest part of the cell (excluding the wall) and is often referred to as the brain of the cell. It is responsible for many of its most important functions.

Nearly all cells have a nucleus.

Mitochondria are known as the powerhouse of the cell. They produce a few forms of chemical energies that are used within the cell. This energy is stored in a small molecule called adenosine triphosphate (ATP).

We typically inherit our mitochondria from our biological mothers.

Mitochondria work slightly differently in each cell – as each cell needs a different range of energy. There are a few types of cells – including red blood cells – that have no mitochondria.

The cytoplasm is the semifluid substance that fills the majority of the cell. Some ribosomes can be found floating loosely around the cytoplasm.

The cytoplasm is mostly made of water but also contains a range of organic materials and salt. Although, it is thicker than water and can be almost gelatinous in some cells.

Inside eukaryotic cells (these are cells that have a nucleus), all of the organelles (the different components of the cell) are found inside the cytoplasm. The organelles include the mitochondria, the nucleus, and ribosomes. Some of these organelles have a membrane that separates them from the cytoplasm, while others are fully enclosed by it.

The rough endoplasmic reticulum (also called the Rough ER) can be found inside eukaryotic cells and its major function is to synthesize proteins.

The rough endoplasmic reticulum is directly attached to the nuclear envelope – this envelope surrounds the nucleus.  Most proteins made here are sent outside the cell.

Rough ERs can be found inside both animals and plant cells.

Chloroplasts are organelles within the cell that can only be found inside plant cells.

When photosynthesis occurs within a plant, light is converted into chemical energy. This process uses CO2 and produces oxygen as well as a range of rich organic compounds.

Some scientists believe that mitochondria and chloroplasts share a common ancestor, as they both do similar jobs but use different resources to create their energy.

Ribosomes are a key part of the cell – in plants, animals, and bacteria – that produce proteins. They are affectionately referred to as the protein factories of the cell.

Proteins are an essential part of nearly every cell and organism on the planet. As humans, we use proteins to carry oxygen around our bodies, to build our muscles and organs, and to digest our food.

Ribosomes are able to read requests from the endoplasmic reticulum and the nucleus of their cell – which comes in the form of mRNA – and translate them into strings of amino acids that eventually become proteins.