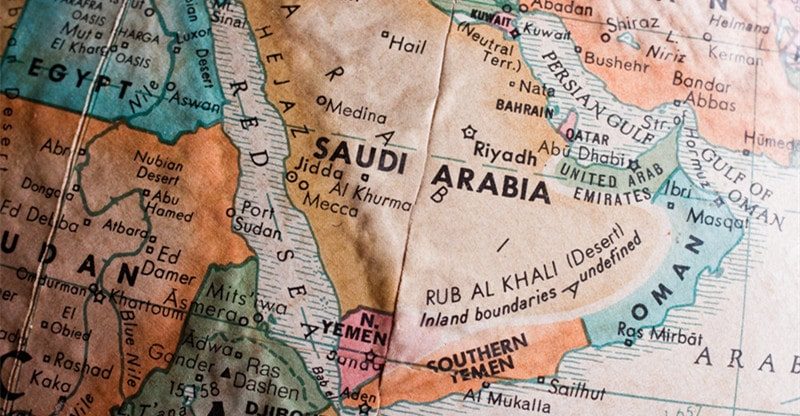 On September 28, 2019, Saudi Arabia launched its tourist visa program, opening its borders to citizens from 49 eligible countries. Since then, it has grown to become the second-largest tourist destination in the Middle East, adding an astounding 9% ($65.2 billion) to the country’s already thriving economy.

Although the program has increased tourism worldwide, Saudi Arabia was also considered a sacred destination for religious pilgrimages, seeing over three million visitors traveling to Mecca during Dhu al-Hijjah.

If you’re planning a trip to Saudi Arabia, you’ll be able to fly into one of the 13 international airports located around the country. Most tourists fly into the capital city of Riyadh, which is the perfect jumping-off point for exploring the best of what the Kingdom has to offer.

Keep in mind that choosing the right month to visit is also important. Despite Saudi Arabia being notoriously hot in the summer, visiting during the months of October or March will offer cooler temperatures perfect for exploring and sightseeing.

Due to the COVID-19 pandemic, the distribution of the tourist eVisa has been suspended. For up-to-date information on the reopening of the borders, you should consult your local Saudi Embassy.

In this article, we’ll cover the top 10 things to be aware of before you travel to Saudi Arabia. That way, you can be fully prepared and know exactly what to expect when visiting this spectacular country.

The tourist season in Saudi Arabia goes from October to March. During this time, the weather is particularly pleasant, hovering anywhere from 22°C to 28°C during the day. It’s best to avoid visiting in the summer months, where the cities, deserts, and seaside can be unbearably hot and humid (with temperatures reaching as high as 45°C).

2. What to Wear in Saudi Arabia

The dress code in Saudi Arabia remains relatively strict for both men and women. Although female tourists are no longer required to wear an abaya (headscarf), it’s still recommended to wear long skirts or loose-fitting pants, as well as blouses with high necklines and long sleeves.

Men should also wear long pants and long-sleeved shirts (although T-shirts are generally acceptable as well). A good rule of thumb is to show as little skin as possible when traveling around the country.

3. How to Get Around in the Cities in Saudi Arabia

Public transportation is fairly limited in and around Saudi Arabia, although there are reasonably priced trains from Riyadh to Dammam, Riyadh to Jauf, and Mecca to Medina. You can also choose to take the bus, although this tends to be the slowest and arguably most uncomfortable option.

In order to navigate the chaotic cities, it’s recommended to hire a personal driver or take a taxi, although more adventurous travelers may opt to rent their own car instead.

Saudi Arabia is a spectacular country, with numerous cities, sights, and attractions worth visiting. If you’re interested in exploring the country’s natural landscapes, you can see the rugged Al Wahbah volcanic crater, the tropical coastline of Umluj, or the dramatic mountainous peaks of Asir.

Besides visiting the diverse landscapes, you’ll also have the chance to dive into the Kingdom’s rich historical past. Explore the ancient lost city of Mada’in Saleh, stop by the UNESCO World Heritage Gate to Mecca sight, or the historic ruins of Al Ula. Some sights might be closed to the public for construction or for tourists in general, so it’s best to do research beforehand and plan accordingly.

Generally, these sections have separate entrances (although the signs may only be in Arabic), so it’s essential to pay attention before entering the restaurant.

Saudia Arabia is a shopper’s paradise, where you can buy everything from silk rugs and gold jewelry to aromatic spices and camel milk soap. There are numerous malls scattered around the city (including Kingdom Center, Centria Mall, and Riyadh Mall Park), although you can also test out your bargaining skills at one of the local souks or marketplaces.

7. Friday is a Holy Day in Saudi Arabia and the Muslim World

The holy day in most Muslim countries falls on a Friday, which means the working week typically runs from Sunday to Thursday. While banks, government offices, and businesses are generally closed during this time, restaurants, shops, and markets usually remain open (although they may operate on reduced hours).

If you’re planning on taking photos during your trip to Saudi Arabia, it is advised to do so with caution. Photography of government buildings, palaces, and local people is not allowed, and breaking the law can result in heavy fines and punishment. In addition, drones are also strictly prohibited around the country.

9. Alcohol is Illegal in Saudi Arabia

Selling, buying, and drinking alcohol of any kind is strictly prohibited in the Kingdom, so don’t expect to have that glass of wine or pint of beer with dinner.

If you are caught intoxicated or in the possession of alcohol, you may face prison time, fines, deportation, and even lashing. This law also applies to incoming flights. If border control suspects you of being intoxicated upon arrival, you might also face fines and punishment.

10. Always Carry Tissue with You

While visiting Saudi Arabia, it’s in your best interest to always carry tissue or toilet paper with you. Public bathrooms rarely come stocked with toilet paper, which can leave you in quite the predicament in a bathroom emergency.

However, most public restrooms have a bidet or water hose that can be used for cleaning instead. Some bathrooms also prohibit sandals or open-toed shoes, so pay attention to any signs before entering.

Between the jaw-dropping landscapes, bustling cities, and fascinating cultural heritage, Saudi Arabia remains one of the most captivating countries on the planet. Although the newly established eVisa program allows tourists to enter and visit the country, the application process of any Saudi Visa can be a bit challenging. Make sure that you allow sufficient time for your visa application and look for expert help if needed.