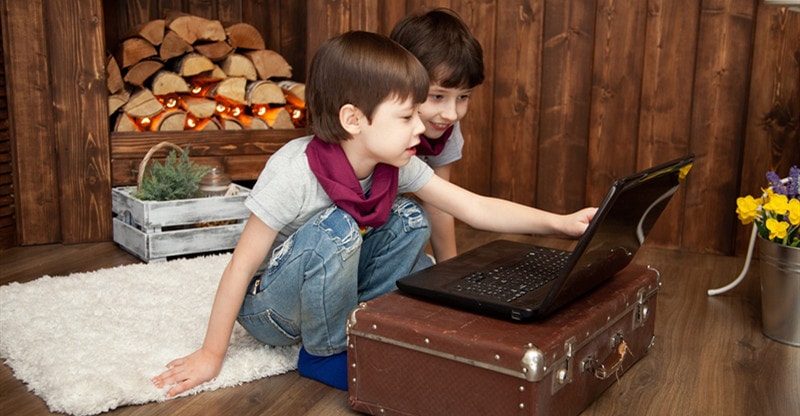 Chalk-drawn racecourses, hopscotch games, backyard obstacle courses, and neighborhood scavenger hunts for teddy bears were the games I grew up playing. Even now, when I close my eyes, I can recall the park we used to play in. Those shrieks of laughter and thumping shoes still echo in my mind when I think of the good old days. (No, seriously, I am not overly dramatic here!)

Fast-forward to the present age, and it seems we were living on an entirely different planet back then. Now, it’s not uncommon to drive by empty parks on Saturday and Sunday afternoon. As for us, we freaked out on the idea of skipping our weekend park visits.

Okay, I won’t fill half of this space moping about my past. Just trying to make a point here – technology and globalization are changing things for humanity. A decade ago, children practically used to grow in the lap of Mother Nature. But now, gadgets have taken charge. Children still shriek and laugh and thump. The only difference is, they are doing it in front of a screen. (Crazy, right?)

Video games have become a popular form of entertainment for kids today. As many as 97% of US kids age 12-17 play video games, contributing to the $21.53 billion domestic video game industry. This practice has spurred a heated debate among parents and educators.

Some believe that too much gameplay can be addictive and total sensory overload. However, video game advocates contend that the majority of research on the subject has flaws. They believe video games under parental supervision can help young kids develop in social, physical, and educational ways.

How Video Games Contribute to Learning?

Before taking sides, it would be wise to examine the stand of its supporters. Let’s see how video games can help in the learning process:

In this era, the ability to virtually travel anywhere on Earth through technology has made it tough for young minds to grasp painfully slow Odysseys. Video games can help to enhance the relevance of such subjects.

Studies reveal that kids who play video games demonstrate a boost in their reading skills. A team from the University of Padua published a paper called “Action video games make dyslexic children read better.” It proves how action games improve the reading comprehension skills of kids with dyslexia.

Generally, some games allow the child to imagine himself/herself in the shoes of the protagonist. Quite honestly, if I were able to watch myself as Macbeth, my concepts in eighth-grade literature class would have been so clear!

Moreover, video games create interactive experiences for students. The excitement level of a child escalates, leading to long-term retention. It certainly doesn’t mean that games can ever replace books. The feel of hard-copies is entirely different and irreplaceable.

Video games can help in the brain development of a child. When I see my nephew Samuel playing Star Battles by Unlimited Gamez Mo, I marvel at its incredible format. He has to search, negotiate, and plan different approaches to advance.

We can easily find such puzzle and mystery games in the digital marketplace. When those tiny heads manage virtual cities and empires, it opens new imaginative vistas for them. Author Paul Darvasi wrote in an article, “Alternate reality games (ARGs) can be used as an immersive learning system that combines rich narrative, digital technology, and real-world game play.”

A body of researchers further proved that kids who play these video games improve in three areas:

Typically, a child cannot grasp the concept of competition. They get stuck at the idea of scoring more than others. The burden put on a child by his/her parents during his/her school years is highly aggravating sometimes. Gradually, as they grow up, they develop tendencies to overload their brains with info. Some others feel stressed to the core and cannot perform up to their capacity.

Video games provide a rescue from these conditions. It is a hobby that tempts young and old alike. Players have to read instructions at the beginning and follow them throughout. In the end, stars and leaderboards empower kids to do better in the next rounds. They can think and react within a jiffy. Daphne Bavelier’s research reveals that those who do not play video games tend to have a slower reaction time on tests as compared to those who play video games.

Plus, these games provide a safe platform for kids to express their competitive instincts. Those who are not the sporty-kind get a chance to excel.

We are slowly crawling into times where creative ideas will be more valuable than conventional techniques. (Or, perhaps, we are there already!)

Hence, we must prepare our kids so they can easily follow the tide. Video games give children a chance to improve their imaginative play. A study published in Creativity Research Journal found a link between some video games and creativity skills. There were 353 participants in the study, divided into three groups.

The researchers concluded that the first group performed better on later tasks as compared to others. That was because they were given the freedom to think on their own.

The gaming industry is growing. And your child’s interest in games can spark their career in the future. That’s for sure.

Yet, it doesn’t mean you hand over the gadgets in those small hands and discard your parental duties. The key to ensure they reap the benefits of video games is to impose certain limitations. Fix a schedule and keep an eye on the games they indulge in. We hope we can raise a generation that brings substantial benefits to humanity.

Let’s join together in this mission!

Author bio:
Andrea Bell is a blogger by choice. She loves to discover the world around her. She likes to share her discoveries, experiences and express herself through her blogs. You can find her on Twitter:@IM_AndreaBell