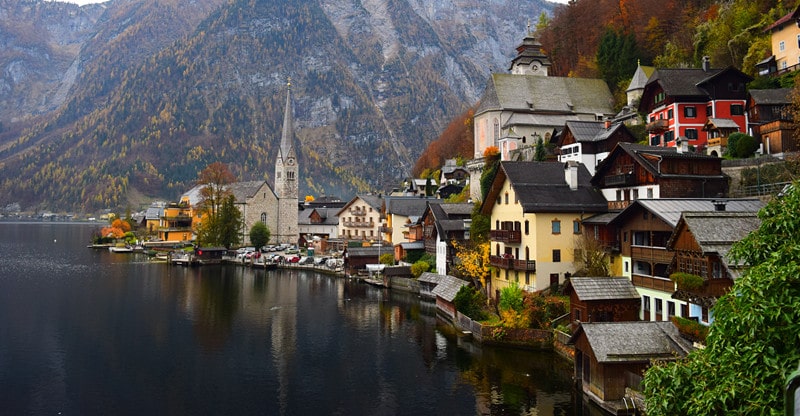 There is something exceptional about Europe. It’s the history, the architectural wonders and the vibrant cultures that change and evolve from border to border. If getting under the skin of Europe and peeling back its cultural layers is something that appeals to you, read on as we dig deep to select five of the most enchanting European cities that are guaranteed to stir your senses.

The French capital of Paris is arguably the most romantic city on Earth. A city that’s famed for its raft of museums and architectural landmarks, notably the Eiffel Tower and the Arc de Triomphe, these areas are visited daily by as many as 300,000 tourists. The Champs-Elysees, which is home to the Arc de Triomphe, offers precious picks for any visitor, with an indulgent array of shops and luxury stores to whet the appetite.

Aside from its attractions, Parisian culture is also characterized by its cuisine. Paris boasts more than 9,000 restaurants for tourists to choose from. This makes it perfect for all eventualities, whether you’re wining and dining a loved one or meeting prospects as part of a small business trip. The Michelin Guide was born in Paris, becoming a world-renowned benchmark for the world’s most decadent eateries, providing unrivaled attention to detail.

Rome is arguably one of the most iconic cities on our planet. With a history spanning some 28 centuries, it is said that the city of Rome dates back as far as 750 BC. Today, so much of the Roman Empire remains, with spectacular architecture such as the Colosseum, St. Peter’s Basilica, and Trevi Fountain offering awe-inspiring experience.

Religion plays a crucial role in Roman life too. As a predominantly Roman Catholic city, Rome has become a much-loved pilgrimage for many centuries. The Vatican City is part of Rome’s city boundary, which is where the likes of St. Peter’s Basilica, the Apostolic Palace, and the Sistine Chapel reside. There are an incredible 900 churches throughout Rome.

The Spanish capital of Madrid is situated in the heart of mainland Spain, 350 kilometers away from any sight of a beach. Fortunately, Madrid is more about its history and architecture than its seaside, with UNESCO World Heritage sites nearby and some of the world’s finest art galleries, notably the Prado Museum.

Sport plays a huge role in the culture of Madrid. The city’s team, Real Madrid, plays at the Santiago Bernabeau, which is a must-see sporting venue if you are in the area. The Spanish giants are one of the most celebrated clubs in European football, winning the Champions League – Europe’s biggest club competition – an unprecedented 13 times. According to leading betting site Betway, Real won the first-ever Champions League competition in 1955, defeating French side Reims. Most seasons, Madrid are still favorites to reach the latter stages of the competition and if you are lucky enough to get a ticket to watch them in action it will be an experience you will never forget.

The historic, long-time capital of Bohemia, Prague, is the jewel in the crown of the Czech Republic. With a rich history and cultural attractions spanning the Gothic, Renaissance, and Baroque eras, Prague is a city that’s flourishing. It is the fifth most visited city in Europe, with the historical center now on the list as a UNESCO World Heritage site.

The Old Town, known as Stare Mesto, is the most impressive area of Prague to explore, followed by Mala Strana across the Vltava River. Both Stare Mesto and Mala Strana are connected by Charles Bridge, which allows tourists to explore Prague Castle and Old Town Square on foot. The city is small enough to explore without the need for public transport and lacks the hustle and bustle of major global cities like LA and New York.

The English capital of London is another city that has been a major settlement for well over 20 centuries. London remains one of the most integral cities on our planet in terms of industry, culture, entertainment, fashion, sport, and the arts, all of which London leads the way in.

In terms of attractions and entertainment, London has it all. From historical landmarks such as Big Ben and the Tower of London, through to the West End theatre and the plethora of live sporting events, there’s always something to see and do in London. As London is Europe’s second-biggest city, it can be easy to feel lost or overawed. However, there are plenty of apps you can download for inspiration and recommendations, which is unsurprising given our reliance on mobile applications wherever we go.

A ride on the London Underground, also known as “The Tube,” is a great experience, mainly as it is the oldest underground rail network in history. It’s easy to fly into London via Heathrow, Gatwick, Stansted, Luton and London City airports, with the former four offering direct rail links into the heart of the city.