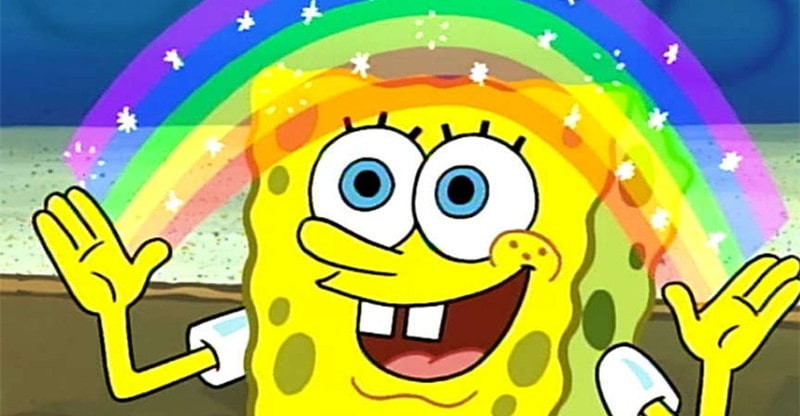 Spongebob is one of the goofiest cartoon characters we all know and love. He’s incredibly funny (sometimes without even realizing it), and has the power to brighten up our darkest days. He also has a couple of good friends in his hometown of Bikini Bottom, who can cause anyone to crack up.

So, we’ve scoured the web to find the best 44 best Spongebob quotes that you’ll love. Hopefully, reading these quotes will help get you through the day, and inspire you to be as good of a person as Spongebob is.

#2. “Ravioli Ravioli, give me the formuoli.” — Spongebob

#3. “I’ll have you know that I stubbed my toe last week and only cried for 20 minutes.” — Patrick Star

Patrick: Yeah, I get called that a lot.

Spongebob: What? A genius?

#8. “Spongebob: Quick, Patrick, without thinking: if you could have anything right now, what would it be?

#9. “Is Mayonnaise an instrument?” — Patrick Star

#10. “Oh, these aren’t homemade. They were made in a factory… a bomb factory. They’re bombs.” — Spongebob

Spongebob: I think it means he’s afraid of Santa Claus.

#12. “Can you give SpongeBob his brain back, I had to borrow it for the week.” – Patrick Star

#13. “Gary, I’m absorbing his blows like I’m made of some sort of spongy material.” — Spongebob

#14. “Remember, licking doorknobs is illegal on other planets.” — Spongebob

Patrick: Are they laughing at us?

Spongebob: No, Patrick. They’re laughing next to us.” — Spongebob and Patrick Star

#19. “Well, it’s no secret that the best thing about a secret is secretly telling someone your secret, thereby adding another secret to their secret collection of secrets, secretly.” —  Spongebob

#20. “Squidward… I used your clarinet to unclog my toilet!” — Spongebob

#21. “SpongeBob is the only guy I know who can have fun with a jellyfish… for 12 hours!” — Squidward

Squidward: Being dead or anything else.” — Spongebob and Squidward

#28. “Too bad SpongeBob isn’t here to enjoy SpongeBob not being here.” — Squidward

#30. “I guess hibernation is the opposite of beauty sleep!” — Patrick Star

#31. “Can I have everybody’s attention?… I have to use the bathroom.” — Patrick Star

Patrick: Umm, I got it. Let’s get naked!” — Spongebob and Patric Star

#34. “You never know the true value of a moment until it becomes a memory.” — Spongebob

#35. “Sometimes we have to go deep inside ourselves to solve our problems.” —  Patrick Star

#36. “Always follow your heart unless your heart is bad with directions.” —  Spongebob

#37. “You’ll never get what you want if you always let people step on you.” – Plankton

#38. “If you believe in yourself and with a tiny pinch of magic, all your dreams can come true.” — Spongebob

#39.“No one can change a person, but someone can be a reason for that person to change.” — Spongebob

#40. “Dumb people are always blissfully unaware of how dumb they really are.” — Patrick Star

#41. “Home is where you’re surrounded by other critters that care about you”. — Sandy Cheeks

#42. “With imagination, you can be anything you want.” — Spongebo

#44. “ Knowledge cannot replace friendship. I’d rather be an idiot than lose you.” — Patrick Star

As funny as it may seem, we could all stand to learn something from Spongebob. He is incredibly optimistic and always look for the best in people. Additionally, he loves all of his friends and would do anything to cheer them up.

Perhaps most important of all, he doesn’t take anything too seriously and knows how to keep himself happy. So, when in doubt, take a look at these 44 quotes from Spongebob — the undisputed king of optimism.