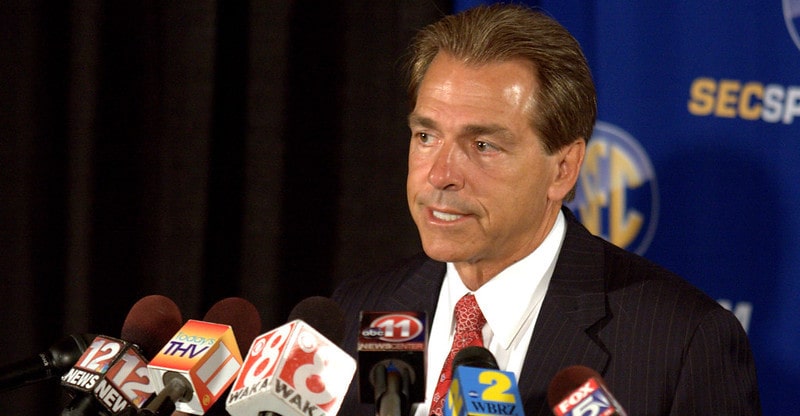 When it comes to larger than life characters in football, there are few who can compete with Nick Saban.

Nick Saban is one of the most successful coaches in history, but he is also one of the most outspoken and opinionated. Saban has never been afraid to tell people exactly what he thinks, and that’s exactly why we all love him.

Nick Saban may not tell us what we want to hear, but he will certainly tell us what we need to hear. His quotes have been not just an endless source of amusement but also a source of motivation. Let’s take a look at 29 Nick Saban Quotes to help make you a better athlete.

Nick Saban Quotes to motivate you on the football field

1. “So I want everybody to think here for a second. How much does this game mean to you? ‘Cause it if means something to you, you can’t stand still. You understand? You play fast. You play strong. You go out there and dominate the man you’re playing against and you make his ass quit. That’s our trademark. That’s our M.O. as a team. That’s what people know us as.”

3. “Don’t ever discount the importance of one on one.”

4. “Pride in performance is really important in being successful.”

8. “The more one emphasizes winning, the less he or she is able to concentrate on what actually causes success.”

9. “It’s not human nature to be great. It’s human nature to survive, to be average and do what you have to do to get by. That is normal. When you have something good happen, it’s the special people that can stay focused and keep paying attention to detail, working to get better and not being satisfied with what they have accomplished.”

11. “What happened yesterday is history. What happens tomorrow is a mystery. What we do today makes a difference.”

12. “As bad as you think you want to win it. I promise you the guys that go out there and work every day … they want to win it more than that. And I’m going to feel a hell of a lot worse for them than you if they don’t.”

15. “The number one thing needed to win is mindset.”

17. “People have to be willing to work and execute on a regular basis.”

Nick Saban Quotes to motivate you off the field

19. “I want everybody here to know, this is not the end. This is the beginning.”

20. “If it was up to you, we’re six-foot under already. We’re dead and buried and gone. Gone. So, if that was the case, we’d have to get some respirators out or something down there to put life back in people.”

21. “Be all you can be in whatever you choose to do. The sky is the limit, so go for it. And do not create any self-imposed limitations.”

23. “Your character is the accumulation of your thoughts, habits and priorities on a day-to-day basis.”

24. “Everyone has the right to fail. But if you go on the field and don’t do your job, the whole team suffers. You don’t have the right to make everyone else fail.”

25. “Sometimes your presence is really important. Everyone has time to do that.”

Nick Saban Quotes to help you become a better leader

28. “Eliminate the clutter and all the things that are going on outside and focus on the things that you can control with how you sort of go about and take care of your business. That’s something that’s ongoing, and it can never change.”

29. “I’ve always been able to stay focused on trying to recruit good players and trying to develop those players.”

Few men in the world of football understand what it takes to be successful as Nick Saban. If you want to find the kind of success that he has done and become the best kind of athlete you can be, then make sure you take some advice from his quotes and get on the right path.

If you have aspirations of playing in the NFL and becoming a big star one day, then you can certainly do a lot worse than paying attention to one of the greatest of all time.

Nick Saban’s no-nonsense mentality has been an inspiration to all of those who have had the luxury of seeing one of his teams play and it will now continue to inspire many more generations to come.